In the fall of 1968, Donald J. Trump received a timely diagnosis of bone spurs in his heels that led to his medical exemption from the military during Vietnam.

For 50 years, the details of how the exemption came about, and who made the diagnosis, have remained a mystery, with Mr. Trump himself saying during the presidential campaign that he could not recall who had signed off on the medical documentation.

Now a possible explanation has emerged about the documentation. It involves a foot doctor in Queens who rented his office from Mr. Trump’s father, Fred C. Trump, and a suggestion that the diagnosis was granted as a courtesy to the elder Mr. Trump. 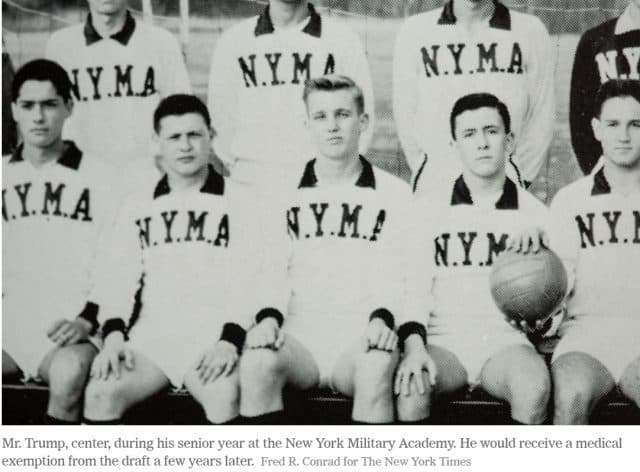 The podiatrist, Dr. Larry Braunstein, died in 2007. But his daughters say their father often told the story of coming to the aid of a young Mr. Trump during the Vietnam War as a favor to his father.

“I know it was a favor,” said one daughter, Dr. Elysa Braunstein, 56, who along with her sister, Sharon Kessel, 53, shared the family’s account for the first time publicly when contacted by The New York Times.

Elysa Braunstein said the implication from her father was that Mr. Trump did not have a disqualifying foot ailment. “But did he examine him? I don’t know,” she said.

SOURCENY Times
ATTENTION READERS
Due to the nature of independent content, VT cannot guarantee content validity.
We ask you to Read Our Content Policy so a clear comprehension of VT's independent non-censored media is understood and given its proper place in the world of news, opinion and media.