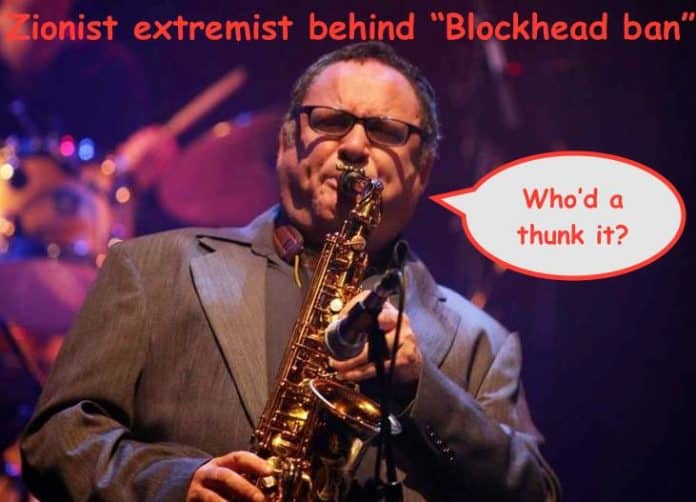 Turns out wasn’t just some ordinary Jewish bloke behind the “Blockhead ban.” Who’d a thunk it?

Listen to Gilad discussing the “Blockhead ban” on my radio show.

PS In case you missed it, check out Fiasco in Islington, Part 1  .

More facts have come to light in the case of Gilad Atzmon and his banning by the Islington Town Council from performing at a jazz concert on December 21, 2018. The original scenario was that one  e-mail from one person calling Atzmon an antisemite somehow persuaded the Islington council to take the drastic step of removing Atzmon from a town-owned venue. Many who heard the story felt this was a rash decision which would surely be reversed when the facts were brought to light. But the Council voted to uphold its decision and Atzmon was indeed not allowed to play.

Now it appears that the single complainant – Martin Rankoff –  was not just an anonymous fan of Israel but the UK director of Likud-Herut. Herut (or ‘freedom’) was Israel’s founding nationalist party from 1948 until it later merged with Likud. It is a militant and extreme Zionist organization whose roots go in a straight line from Ze’ev Jabotinsky and Menachem Begin up to Benjamin Netanyahu today. Jabotinsky and Begin helped form the Irgun terrorists in 1937. Irgun committed notorious massacres in Palestine leading up to and during the Nakba (or ‘catastrophe’) of 1947-1948. These include the bombing of the King David Hotel  in Jerusalem in 1946, killing 91 people, and the massacre at Deir Yassin  in 1948 in which 254 unarmed Palestinian villagers were brutally murdered as an incentive for other Palestinians to leave. On its web site Likud-Herut UK lists Jabotinsky and Begin as “visionaries.” Likud-Herut is a member of the World Zionist Organization and the Zionist Federation of the UK  who believe in “the inalienable right of all Jews to live and settle in all parts of the Land of Israel.”

In a letter to the New York Times in 1948 Albert Einstein, Hannah Arendt, and others compared Herut to the Nazis and Fascists who had just been defeated in World War II. Referring to this letter,  Ramzy Baroud recently wrote,  “the ‘Nazi and Fascist’ mentality that defined Herut in 1948 now defines the most powerful ruling class in Israel. Israel’s leaders speak openly of genocide and murder, yet they celebrate and promote Israel as if an icon of civilization, democracy and human rights.”
–
The history of Herut and Likud tells us a great deal about who the people are who complained about Atzmon to Islington Town Council. When Atzmon moved to appeal his being banned, formidable opponents again appeared in the form of the Simkins Law firm, one of the most expensive law practices in Britain, with  not one but two partners at Simkins being put on the case. These are Gideon Benaim and Tom Iverson. Benaim recently became well known in Britain for winning an invasion of privacy suit against the BBC on behalf of pop singer Cliff Richard, who said he spent ￡3.4m ($4.3 million) on the case. Clearly, representation by Simkins doesn’t come cheap. Also listed in Benaim’s resumé as a client is the Las Vegas Sands Corporation which likely has no problem with Simkins’ fees either. The Sands casino is owned by billionaire Sheldon Adelson, who, as it happens, is a primary sponsor of the Likud Party in Israel, led by Benjamin Netanyahu. Adelson owns the newspaper Israel Hayom, a mouthpiece for Netanyahu and Likud.

It now appears that Atzmon’s banning was not the result of a casual complaint; it was an intentional attack on a well-respected supporter of Palestinian human rights by the Likud organization, directly represented by Martin Rankoff. The attack was followed up by the hiring of a lawyer who has worked for Likud godfather Sheldon Adelson. The connection to these powerful forces may explain why Islington Town Council leader Richard Watts, without any delay or attempt at negotiation, took the step of going straight to a decision to hire an expensive law firm. This is while Islington is facing serious austerity and shortage of funds in its own operating budget. Islington has a population of about 206,000 people. This very month, 43 of those people were counted in one survey as homeless and sleeping on the streets.

Regarding the financial problems of his borough and others around London, Richard Watts, told The Independent in October 2018 that “unprecedented” funding pressure and demand for adult and children’s social care and homelessness services was “pushing councils to the limit”.

“As a result less money is being spent on the other services that keep our communities running such as libraries, local roads, early intervention and local welfare support,” he added.

Yet, to Watts and his fellow councilors in Islington, backing partisans for a foreign country – Israel — took precedence over the pressing needs of the people whom they are supposed to represent. Either Watts was inexcusably careless with scarce town funds or a deal was made and he knew that he could depend on Likud-Herut to back him. Or, like politicians all across Europe and the US facing the power of the Israel lobby, he knew he couldn’t afford to say no.

According to Simkin’s web site, Gideon Benaim “has extensive expertise in the areas of defamation, privacy, harassment and copyright.” Perhaps it is not a coincidence that immediately after Islington brought in Simkins, identical statements from an unnamed Labour spokesman describing Atzmon as “a vile antisemite” appeared in both the BBC and The Guardian. Perhaps a lawyer experienced in defending people against defamation and harassment would also know how to perpetrate these things. Perhaps this was Benaim’s opening move. Character assassination is a common tactic in cases that have a weak legal foundation, such as this one, as it goes a long way to convicting the accused before their case ever reaches a courtroom.

The involvement of Likud-Herut in the attack on Gilad Atzmon, and Islington’s official backing of that attack, constitutes a monumental scandal. This wasn’t just a stupid mistake; it was a hit. It is an affront to reason that an an arch-racist organization like Likud, who from the beginning have stood for the removal of the people of Palestine from their own land by means of terror, murder, and forced expulsion, could possibly claim they they were defamed by someone pointing out these very crimes. There is a case of defamation here for sure – the defamation of Gilad Atzmon. For Zionists, defamation is nothing more than a tool to destroy opponents who can’t be dealt with by other means. We are long since tired of truth tellers being accused of antisemitism. We’re tired of national and local resources being used to prop up the criminal state of Israel. Coercion by advocates for Israel is at the center of this issue in Islington, as it is in many other towns and many other countries. For the sake of Palestine and our own sovereignty, it has to be called out and stopped.