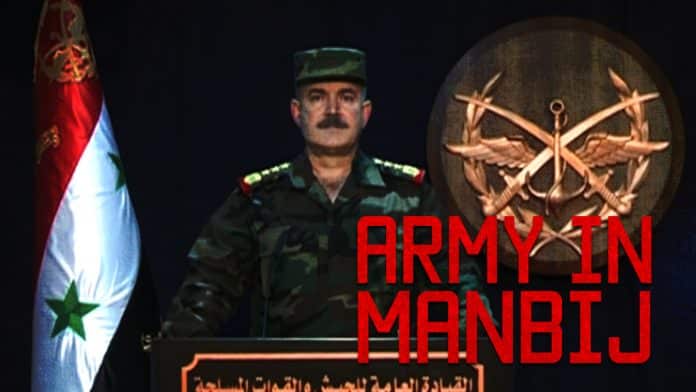 On December 28, the Kurdish People’s Protection Units (YPG) released an official statement inviting the Damascus government to assert control of the areas, from which YPG units had allegedly withdrawn, in particular Manbij. The YPG added that the decision is caused by the Turkish threat and that the group will concentrate its efforts on combating ISIS.

Syrian troops reportedly started entering the town of Manbij in the morning of the same day.

Meanwhile, the Turkish Armed Forces (TAF) have continued concentrating troops and military equipment near the Syrian border. According to fresh reports, the TAF has deployed at least 10 M60T battle tanks and several armored vehicles in the province of Kilis.

On December 27, the UAE’s Ministry of Foreign Affairs and International Cooperation announced the reopening of the country’s embassy in the Syrian capital of Damascus. Abdul Hakim al-Nuaimi was appointed as the UAE’s charge d’affaires in Damascus.

The reopening of the UAE embassy in Syria is another important step in the framework of the broader efforts of the Damascus government to restore its role in the region. Furthermore, this confirms that the UAE sees the Assad government as a legitimate government of Syria. This is something what the UAE’s key ally, the US, has repeatedly challenged by its statements and actions.

Russian companies are reportedly planning to construct an airport in the city of Tartus, as well as joint Syrian-Russian plant to produce vaccines within a framework of agreements signed during the 11th session of the Syrian-Russian Intergovernmental Commission held on December 14th in Damascus. Other notable bilateral projects include rebuilding the car tires’ factory and construction of a new cement plant.