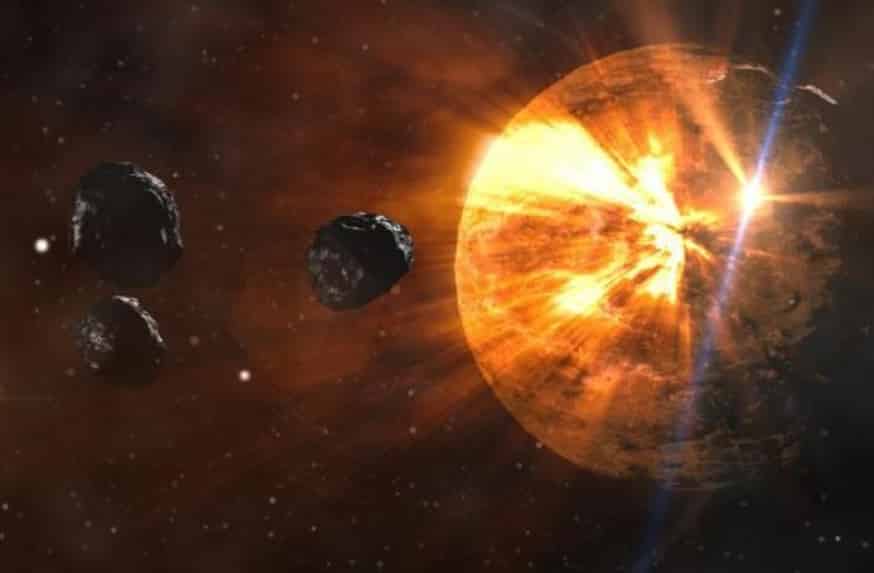 Recall that on Monday the Bureya River in the Khabarovsk Territory was blocked by a collapsed volcano. At the same time, local authorities did not rule out that a giant meteorite could have caused the river to fall asleep, which in the fall demolished the top of the mountain. Some recalled that on December 11 they had flowers from the windowsills. The Emergencies Ministry, however, noted that the seismic stations did not record seismic events in the area.

Specialists of the Far Eastern Center SIC Planeta found significant landscape changes on satellite images. On one of the hills there is no more top and vegetation. According to NTV, Yevgeny Zubko, a leading researcher at the School of Natural Sciences of the Far Eastern Federal University, noted that “local residents marked the arrival of a blast wave. Whether it will be possible to find fragments of a meteorite depends on the fall parameters and, to some extent, on luck.”

For his part, the Director of the Institute of Astronomy of the RAS, Boris Shustov, after consulting with experts from the Institute of Dynamics of the Geosphere, said that this was a landslide. The Far Eastern Federal University noted that the meteorite could go unnoticed due to the fact that the incident occurred during the day and the object itself could move at high speed and almost vertically, in contrast to the Otselyabinsk meteorite falling tangentially.

“Around the place where the blockage was formed is solid taiga, who could see the falling object? Rumors are spreading, but the most interesting is ahead,” said Alexei Maslov, head of the administration of the Verkhnebureinsky district.

Pravde.Ru was told by Anatoly Zaitsev, general director of the nonprofit partnership Center for Planetary Protection, to Pravda.Ru .

– Was it a meteorite?

– First, there was not a single observation of the fall. You remember that Chelyabinsk meteorite was observed by hundreds, thousands of people. A meteorite does not just fall vertically, but, as a rule, flies along a shallow trajectory several hundreds, maybe even thousands of kilometers long. It depends on the angle of entry into the atmosphere. Secondly, if it were a meteorite, then seismic vibrations, a shock wave, an explosion should have been recorded . This was nothing. Therefore, from my point of view, this is clearly a geological process: somewhere, something was washing away, maybe a river, because it was next to a river, maybe there were some voids, something else.

However, in spite of this, I would like to warn that asteroid danger threatens us from space. But no one seriously, unfortunately, wants to deal with this matter, at least in our country.

– Do you have any experience in protecting the planet from meteorites and asteroids?

There are some achievements. Our center has developed a project “Citadel”. We propose to turn the Earth into an impregnable fortress on the basis of rocket-space, nuclear and other developments. For example, one of the important components of this protection system is the Zenit launch vehicle, which was developed and built at Yuzhmash, the Ukrainian design bureau. In connection with the situation in Ukraine, as I understand, the work on this launch vehicle stopped there. This is very sad. Unfortunately, all our attempts to appeal to the appropriate structures capable of making decisions run up against the passivity of officials, refusals, and formal replies. Although, in particular, in the same United States, work is carried out quite actively and is funded by the state.

What is the probability of a meteor or asteroid destructive attack?

– The Chelyabinsk meteorite showed everyone that this is a real threat. In June, we celebrated 110 years of the fall of the Tunguska meteorite . The threat is recognized not only by scientists, but by many international and national organizations – in the UN, PACE. We also had recommendations in the Academy of Sciences, in the Federation Council that we should deal with them. But all, unfortunately, turns into a shaking of air. The only enthusiasm only supports.

The world’s leading nations must resolve the issue and make the defense. It is not so expensive. For 5-7 years, according to our estimates, we could completely protect the Earth from asteroid and, in part, from cometary danger. From the comet is more difficult. Why? Because comets are gigantic in size – tens of kilometers in diameter. This requires serious work, we need new technologies.

For example, in 2016, according to the observations of Americans, in the sphere of Earth’s attraction with a radius of one million kilometers (a little more than two distances to the Moon), 160 asteroids with sizes ranging from several meters to several hundred meters flew by . In fact, we are under constant “shelling”. Every 2 days “cobble” flies past us. And wait, when all the same he does not fly past, but crashes into the Earth, you should not.

Read on:  In the Chelyabinsk meteorite found a crystal that looks like a diamond