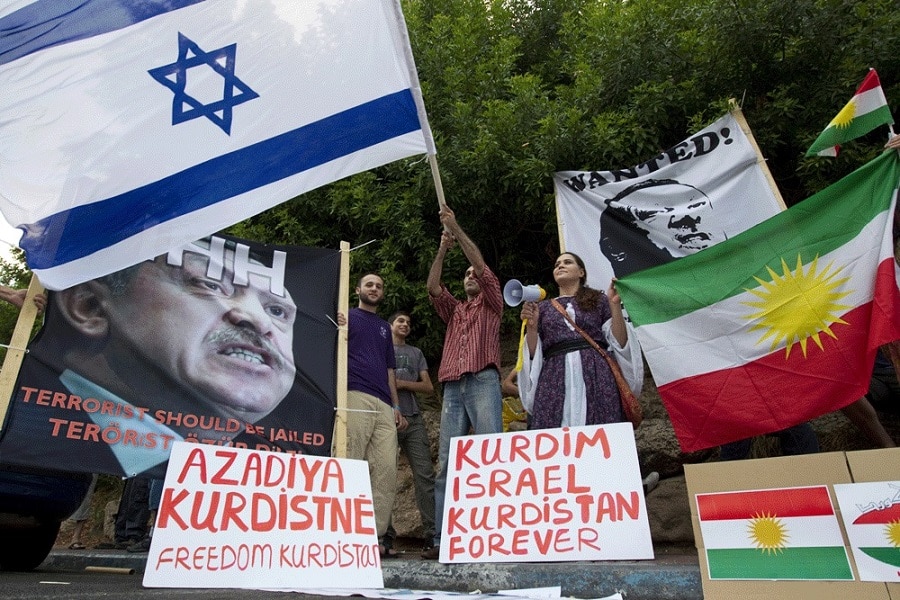 It breaks my heart to see President Donald Trump being scholonged by Israel, Kurds, Exxon, CIA, Pentagon and then China & Iraq, NOT Iran.

The Zionists are using the Kurds and helping steal oil from Iraq. The CIA is lying to the President, either because it does not know, or because Gina Haspel has thrown her lot in with the Zionists, the neo-cons, and our Christian Zionist Secretary of State who is in no way capable of managing our exit from the Middle East. The Pentagon is divided and operating without intelligence (pun intended).

China is working with Iraq toward the expulsion of the US and an extension of One Belt One Road to include Chinese exploitation of Iraqi oil after the Kurds and Zionists are put down. The Iraqi government organized the demonstrations and in alliance with Israel and Turkey is hoping to goad President Trump into doing something so outrageous it costs him re-election. Patrick Buchanan is on the money here — if the President falls prey  to some combination of lies from the “national security” and “intelligence” mandarins, and his own ego, he is going to sign his death sentence with a new quagmire.

The only country here that is NOT attacking the USA is Iran.

And by the by, the “contractors” in Iraq are Exxon employees who are working with Israel and the Kurds to steal Iraqi oil.

I believe Col Doug Macgregor delivers a message to the President that the current National Security Advisor should be but probably is not delivering. See also the links below the video.  The President is being scholonged.

My position is simple: leave Iraq, leave Syria, leave Afghanistan, close all our bases overseas stating with the ones surrounding Iran, make the deal with Iran, and throw Israel into the trash heap of history. Enough, already.

US Embassy in Baghdad Evacuated Due to Seige

ROBERT STEELE: I am seeing a pattern of articles such as the one below, all seeking to deceive President Trump into thinking that he is a facing a potential Iranian Embassy crisis of occupation.

This Is Not 1979, And Donald Trump Is Not Jimmy Carter

An Alert Reader with senior level IC access writes in:

This crowd at the Embassy is a deliberate provocation by Israel and CIA with the complicity of the Iraqi government, intended to force Trump to take a series of aggressive actions that leads to a war with Iran that will in turn assure his defeat in 2020 when combined with all the money that Bloomberg, Soros, Steyer, and the Zionist MEGA Group  (Brofman, Wexner et al) are spending to mobilize anti-Trump voters outside the Democratic Party.

Another thread is an expected increase in active shooter and false flag events along with specific political assassinations to be blamed on alleged white supremacists but actually carried out by mercenaries, for example, from Dynacorps which is controlled by the President’s own chairman of  the PFIAB, Steve  Feinberg, a virtual member of the Zionist MEGA Group.

You nailed it when you called Israel a Russian criminal state, and you nailed it again when you said our President is being schlonged by everyone except Iran. The general feeling in my circles is that the President’s National Security Advisor is either too ignorant and naive to read the tea leaves and properly advise the President, or he is part of the conspiracy to force the President into a new war that is intended to weaken him in 2020.

To the above as context I would add the very real fear within the upper ranks of the invented criminal apartheid genocidal war-mongering state of Israel with respect to President Trump being ready to make the deal with Iran over restoration of Palestine. There is a growing belief among the Zionists that they can get Michael Bloomberg or Bernie Sanders elected, and that either will be more favorable to Israel than a re-elected Donald Trump.

Israel, not Russia, not anyone else, is the primary threat to the integrity of the US election in 2020, and the primary threat to peace in the Middle East. They know that President Trump knows this.  They are in full panic mode and this Iraqi theater is an act of desperation. I pray the President perceives all of this even if his closest advisors do not (or do but lie to him — they will make more money in the long run if the Deep State outlasts President Trump). St.

AFTERTHOUGHT: Below is what a depleted uranium baby looks like.  They are called the Faluja babies.  There are thousands of them. The USA will *never* recover from what it has done to Iraq because of the Zionist and neoconservative traitors in the USA lying to everyone to justify this failed war along with the failed war in Afghanistan.  War is a racket.  Time to stop it.

Review: 935 Lies – The Future of Truth and the Decline of America’s Moral Integrity

Worth a Look: Book Reviews on War Complex—War as a Racket