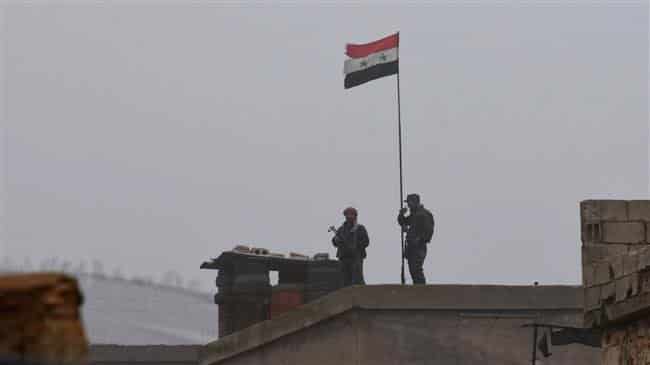 [ Editor’s Note: We now can see why Turkey continued to deploy troops and armor, even going into Syria over the last week. While the YPG had said it was going to withdraw, it hadn’t, so Erdogan was inspiring them to pick up the pace.

Actually the YPG has been wasting troops in Manbij, when they could have been put to better use clearing ISIS out of eastern Deir Ezzor province, a fight which has dragged on for months and months despite full US air support with scores of bombing missions.

VeteransToday felt the US was slowing that process down to justify maintaining its presence there. And let us not forget that only a few weeks ago a Pentagon statesman had surprisingly admitted that the US would have troops inside Syria for the “foreseeable future”.

No one wasted their breath to ask why. We all know the answer would be the rubber stamp trump card that is always used to justify US “meddling”, the old “to protect our interests” canard.

Even when the fighting has wound down, the cat is already out of the bag on rounding up the heavy weapons the Pentagon supplied to the Kurds. It has already stated that tracking them all down would be “problematic”.

The US has now joined what John Kerry shared with us in his book when he quoted Bibi, “In the Mideast, everybody lies”. I am becoming convinced that’s true, especially at the national level. And, you just can’t make this stuff up… Jim W. Dean ]

Syria says hundreds of US-backed Kurdish fighters have withdrawn from the city of Manbij near the border with Turkey to take position to the east of the Euphrates.

The Syrian Defense Ministry announced Wednesday that “approximately 400 Kurdish fighters” had left the border town, days after Kurdish groups appealed to the government of President Bashar al-Assad to support them against a possible Turkish offensive.

Their departure was in line with an agreement “for the return of normal life to the area of northern Syria,” the ministry said in a statement. The Kurdish People’s Protection Units (YPG) had confirmed earlier that they were evacuating the town, which they seized from the Daesh terrorist group in 2016.

An online video published by the Syrian ministry showed dozens of vehicles carrying armed fighters, some of whom waved flags of the YPG and its female counterpart, the YPJ. It was not clear how many fighters would remain in Manbij.

Last week, the YPG asked Damascus to deploy troops to the key city following US President Donald Trump’s decision to pull American forces out of Syria.

Trump said in late December that Turkey would take on Washington’s military responsibilities in Syria.

Turkey has already launched an incursion into northern Syria to push back against the Kurdistan Workers’ Party (PKK), which regularly clashes with Turkish forces in the Kurdish-dominated southeast of Turkey. Ankara views YPG as the Syrian branch of the PKK.

The YPG is part of the of the Syrian Democratic Forces (SDF), which has close military cooperation with the US. Trump’s decision to leave Syria exposes the Kurdish group to possible Turkish attacks.

Turkish military forces have held an area bordering Manbij since 2016. Ankara has repeatedly demanded that the YPG leave the region and retreat to the east bank of the Euphrates.

Turkish President Recep Tayyip Erdogan said recently that his country’s military forces will have no business in Manbij once YPG leaves.

For the first time in years, the Syrian Army entered Manbij last week, pledging to establish “full security for all Syrian citizens and others present in the area.”