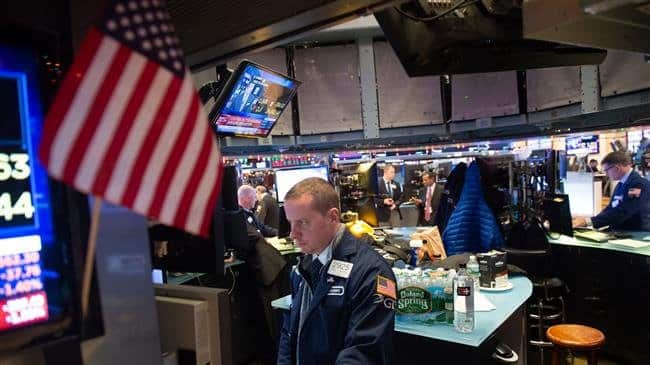 [ Editor’s Note: The news below shows the growing potential storm, where no specific dispute is enough to trigger a worldwide recession, but a group of them at the same time could.

President Tweet, as always, is playing both sides of the street, where if he is right, he claims all the credit, and if wrong, someone else is responsible and gets fired. We have all been here before.

A perfect example was when the market was tanking in December, Trump was hanging that all around the Fed Chairman’s neck for raising interest rates a quarter of a percent, a move that had been telegraphed by the Fed for months. Now Trump is quoted below as attributing the market decline to “glitch”, also a reflection of his limited vocabulary. A more experienced, high-level hustler usually spreads their contradicting positions out a bit more, but not the Donald.

Everyone will be nervously watching for any negative momentum developing. The Apple news, which had an obvious ripple effect, was a given, but the same can happen if the number of industries affected in the tit-for-tat US-China trade war moves continues.

The US travel warning on China is another momentum example. This taking business people as hostages in trade wars is going to slow down the big trade convention business, with companies not wanting to risk having their people grabbed as spies for a barter chip.

The new US acting Pentagon chief has already shifted the “big threat” focus onto China, obviously something that was handed to him to push, just as we go into the second month of the 90-day time-out box for the US and Peking to try to iron out a new trade deal.

So could some of the increased pressure be tied to one side muscling the other for some benefit, or is it just the gang that can’t shoot straight chaos thing? Trump said today that the China negotiations were going wonderfully. Color me suspicious that that is far from the truth.

Add to that the twists and turns on the Korean Peninsula controversy. North and South Korea are moving ahead with major economic moves, while Trump sits as the man on the mountain repeating that all US sanctions will remain until Kim does everything that Trump wants first – hardly a stance that will produce a solution.

Kim is now saying that if Trump will not do a step-by-step deescalation, he will have to take a “new path”. My bet is this thing will get worse before it gets better. I hope I am wrong… Jim W. Dean ]

US stock index futures fell sharply on Thursday after Apple Inc stunned investors with its first sales warning in more than a decade, deepening fears about a slowdown in China’s economy and its impact on corporate profits.

Apple’s shares tumbled 8.8 percent in pre-market trading after the iPhone maker slashed its holiday-quarter revenue outlook due to slowing iPhone sales in China, sparking fresh concerns over the fallout from the Sino-US trade war ahead of the US earnings season.

The warning from Apple, whose stock is a member of all the three major indexes, is a gloomy omen for Wall Street bulls hoping for an early gift in 2019 following December’s steep selloff.

Though the recent sell-off has lowered the S&P 500’s valuation, to 14 times expected earnings from 18 times a year earlier, earnings estimates have also been sharply lowered.

Analysts on average expect S&P 500 companies to increase their earnings per share by nearly 7 percent this year, down from a forecast of 10 percent growth at the start of October and far below their expectations of 24 percent EPS growth for 2018, according to the most recent estimate from Refinitiv’s IBES.

A measure of US consumer confidence posted its sharpest decline in more than three years in December.

Apple’s warning on China has the potential to weigh heavily on a wide variety of companies. Chipmakers, which count both Apple and China as major revenue generators, led the decliners in early pre-market trading, while trade bellwethers Boeing Co and Caterpillar Inc dropped over 2 percent.

The United States and China are about one month into a 90-day tariff ceasefire, and President Donald Trump said on Wednesday that negotiations “are coming along very well”.

Trump also called the stock market’s drop at the end of 2018 a “glitch” and said the market would again go up once various trade deals are settled.

Apple’s warning follows data earlier this week that showed a deceleration in factory activity in China and the euro zone, indicating the ongoing trade dispute was taking a toll on global manufacturing.

The impact on US activity will be clear later on Thursday. The Institute of Supply Management is expected to report a fall in its index of US factory activity to a reading of 57.9 for December, from a reading of 59.3 in November.

Also on tap is the ADP National Employment Report, which is expected to show US private payrolls rose by 178,000 jobs in December. The report comes ahead of the more comprehensive non-farm payrolls report on Friday.