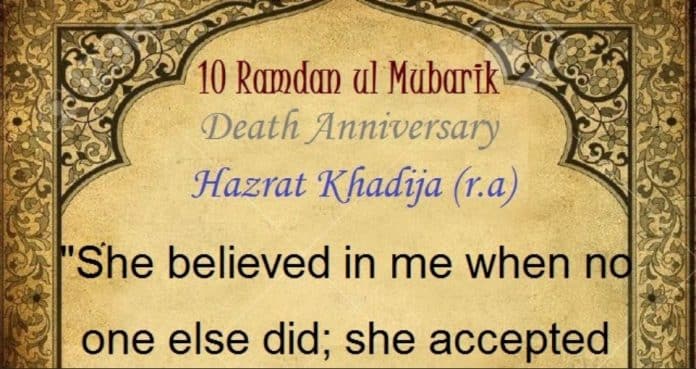 In all, Prophet Mohammad married thirteen wives. But he married his first wife Khadija when he was 25 years old and she was 40. All other marriages were contracted after the death of Khadija when Mohammad was 50 years old.

Mohammad was 40 years old when he received his first divine revelation and Khadija was the first person to convert to Islam. It’s worth noting here that Mohammad was illiterate and couldn’t read and write, whereas Khadija was a rich and erudite merchant of the ruling tribe of Mecca, the Quraysh.

She would frequently send trade caravans to the Levant and appears to have been well-versed in the history and theology of Judaism and Christianity which were the dominant religion of the Levant then. Therefore it doesn’t come as a surprise that most of Islamic theology is based on the Abrahamic religions.

It was during the course of one such trade transaction to Syria that Khadija employed Mohammad as her agent. She was impressed by his skills and honesty, and subsequently sent a marriage proposal which Mohammad accepted.

Thus, it appears that the driving spirit behind the prophethood of Mohammad was actually Khadija, and most verses of the holy book of Muslims, the Quran, were inspired by her, particularly the knowledge of pre-Islamic Abrahamic religions, Judaism and Christianity.

If we look at the evolution of Islamic religion and culture throughout the 20th and 21st centuries, it hasn’t been natural. Some deleterious mutations have occurred somewhere which have negatively impacted the Islamic societies all over the world.

Social conditioning plays the same role in social sciences that natural selection plays in biological sciences. It selects the traits, norms and values which are most beneficial to the host culture. Seen from this angle, social diversity is a desirable quality for social progress, because when diverse customs and value systems compete with each other, the culture retains the beneficial customs and values and discards the harmful traditions and habits.

The Shi’a Muslims have their Imams and Marjahs (religious authorities), but it is generally assumed about Sunni Islam that it discourages the authority of clergy. In this sense, Sunni Islam is closer to Protestantism, at least theoretically, because it prefers an individual and personalized interpretation of scriptures and religion. Although this perception might be true for educated Sunni Muslims, on the popular level of the masses of developing Islamic countries, the House of Saud plays the same role in Sunni Islam that the pope plays in Catholicism.

By virtue of their physical possession of the holy places of Islam – Mecca and Medina – the Saudi kings are the de facto caliphs of Muslims. The title of the Saudi king: Khadim-ul-Haramain-al-Shareefain (the servant of the house of God), makes him the vice-regent of God on earth; and the title of the caliph of Muslims is not limited to a single nation state, the Saudi king wields enormous influence throughout the commonwealth of Islam, the Muslim Ummah.

Islam is regarded as the fastest growing religion of the 20th and 21st centuries. According to World Religion Database, the share of world population by religion during the last century was:

Thus, while the number of adherents of all other religions has remained static or dwindled, the proselytization of Islam has nearly doubled.

The only feature that sets Islam apart from the rest of major cosmopolitan religions, like Christianity, Buddhism and Hinduism, and which is also primarily responsible for this atavistic phenomena of Islamic resurgence in the modern era is that Islam as a religion and political ideology has the world’s richest financiers.

After the 1973 collective Arab oil embargo against the West in the wake of the Arab-Israeli war, the price of oil quadrupled; and the contribution of the Gulf’s petro-sheikhs towards the ‘spiritual well-being’ of Muslims all over the world magnified proportionally. This is the reason why we are witnessing an exponential growth of Islamic charities and madrassas (religious seminaries) all over the world and particularly in the Islamic world.

The phenomena of Islamic radicalism all over the world is directly linked to Islamic madrassas that are generously funded by the Gulf’s petro-dollars. These madrassas attract children from the most impoverished backgrounds in the Third World Islamic countries, because they offer the kind of incentives and facilities which even the government-funded public schools cannot provide: such as free boarding and lodging, free meals for destitute students, no tuition fee at all and free of cost books and stationery; some generously funded madrassas even pay monthly stipends to their students.

Moreover, it’s a misconception that the Arab sheikhs of Saudi Arabia, Qatar, Kuwait and some conservative emirates of UAE generally sponsor the Wahhabi-Salafi sect of Islam. The difference between numerous sects of Sunni Islam is more nominal than substantive. Islamic charities and madrassas belonging to all the Sunni denominations get generous funding from the Gulf Arab states as well as from wealthy private donors.

Besides madrassas, another factor that promotes the Gulf’s Wahhabi-Salafi ideology in the Islamic world is the ritual of Hajj and Umrah. Every year, millions of Muslim men and women from all over the Islamic world travel to the holy cities of Mecca and Medina to perform the pilgrimage. When the pilgrims return home to their native countries, after spending a month or two in Saudi Arabia, along with cleansed hearts and purified souls, they also bring along the tales of Saudi hospitality and their supposedly ‘true and authentic’ version of Islam, which some Muslims, especially the backward, rural folks, find attractive and worth-emulating.

Yet another factor which contributes to the rise of Wahhabi-Salafi ideology throughout the Islamic world is the migrant workers. Millions of Muslim men, women and families from all over the developing Islamic countries live and work in energy-rich Saudi Arabia, Qatar, UAE, Kuwait, Bahrain and Oman. Some of them permanently reside there but mostly they work on temporary work permits.

Just like the pilgrims, when the migrant workers return home to their native villages and towns, they also bring along the tales of Saudi hospitality and their version of supposedly ‘authentic Islam.’ Spending time in the Gulf Arab states entitles one to pass authoritative judgments on religious matters, and having a cursory understanding of Arabic, the language of Quran, makes one equivalent of a Qazi (a learned jurist) amongst illiterate, rural Muslims; and such charlatans simply reproduce the customs and traditions of the Arabs as the authentic version of Islam to their backward, rural communities.

Finally, regarding the regression of Islamic culture and religion in the modern era, the designation caliphate was used to describe enlightened and majestic Islamic empires of yore, such as the Umayyads of Damascus, the Abbasids of Baghdad, the Ottomans of Turkey and the Mughals of India.

And now, it is being used as a slur to revile the repressive and medieval rule of the Taliban in Afghanistan and the Islamic State in Iraq and Syria, and two-bit warlords like the Taliban’s deceased chief, Mullah Omar, and the Islamic State’s fugitive leader, Abu Bakr al-Baghdadi, have appropriated the exalted Islamic titles of Ameer-ul-momineen and the caliph of Muslims.