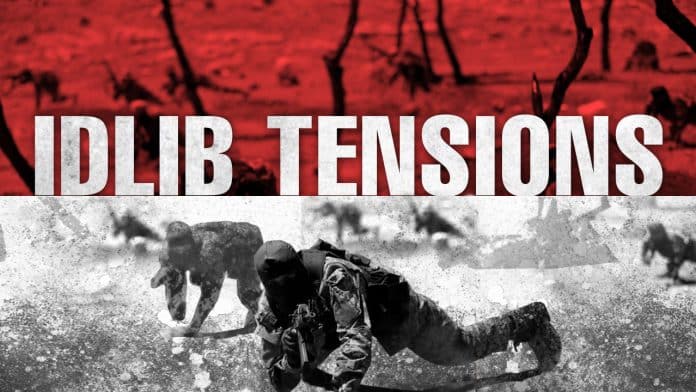 In early January 2019, the military situation in Syria continued to develop in the framework of the existing trend with the terrorist threat in the Idlib de-escalation zone and the Turkish-Kurdish conflict as two main sources of tensions.

Over the past week, Hayat Tahrir al-Sham has made a fresh push to expand its influence over Turkish-backed groups in western Aleppo, southern Idlib and northwestern Hama. After accusing the Nour al-Din al-Zenki Movement of assassinating 4 HTS members, HTS launched an attack on Darat Izza along with several nearby settlements. Then, Hayat Tahir al-Sham expanded its activity into southern Idlib and northwestern Hama, where it captured the settlements of Faqie, Tramla, Arnaba, Shahranaz and Shir Mughar from Turkish-backed militant groups.

According to reports, the so-called National Front for Liberation (NFL), which is the main alliance of Turkish-backed militant groups in the area, was able to repel a HTS attack in southern Idlib, to recapture Tremla and Al-Ghadfah but has not been able to push back HTS near Ma’arat Al-Nu’man.

According to the Lebanese TV channel al-Mayadeen, over 180 militants have been killed in the fighting. Furthermore, both sides actively use mortars and other heavy weapons thus causing civilian casualties.

Even if the NFL with help from Ankara solves the current round of tensions within the militant-held area in northwestern Syria, the issue will remain while Hayat Tahrir al-Sham operates in the area. HTS is officially excluded from the de-escalation zone agreement, but Turkey and its proxies either unable or unwilling to neutralize it because it remains the most capable military force of the so-called opposition.

In its own turn, Hayat Tahrir al-Sham seeks to expand its influence in the area further in order to limit chances that it would become a non-useful tool of the Turkish foreign policy whereby it would become more profitable to eliminate it than to tolerate its existence.

A group of internally displaced persons left the al-Rukban refugee camp and returned to the government-held town of Mahin in southern Homs, the Sham FM radio station reported on January 3 citing Syrian officials. According to the report, the first group of IDPs consisted of 209 civilians, mainly women, children and elders. More people are expected to return from the camp in the upcoming few weeks. The al-Rukban refugee camp is located within the 55km de-escalation zone around the US-led coalition base in al-Tanaf. After the formal announcement of US troops withdrawal, a panic appeared among US-backed militant groups there. This allowed to facilitate the return of civilians from the refugee camp where a humanitarian crisis has been developing.

Another point of tensions is the area of Manbij. A large force of Turkish proxies is still deployed near the area despite reports about their alleged withdrawal. The further development of the situation will depend on the schedule of the expected withdrawal of US troops and the result of ongoing negotiations between Damascus and the YPG.