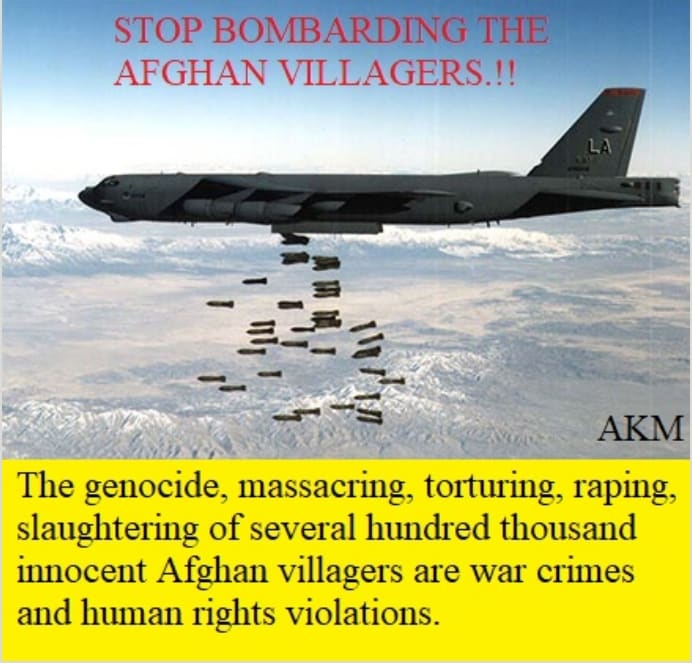 The key step to implement this Plan for Peace must be: (1) The United States needs to talk directly in face-to-face meetings with the Afghan Freedom Fighters without the presence of the Kabul puppet administration, Pakistan, Saudi Arabia, etc. The War Profiteer’s Rand Corporation’s recently proposed Peace Plan is not the right plan for Afghanistan. The Afghan villagers, the majority, are not a threat to the United States. The United States needs to stop using them as scapegoats for the tragic events of 9/11.

We are a group of Afghan brothers and sisters (the Afghan National Peace Council “ANPC”), who do not have Afghan blood on our hands and who are not accused of crimes by any human rights commission or organizations, the United Nations, and/or the general Afghan public. We rely on Islamic principles, our Afghan code of honor and our history of independence, and having a genuine desire to end the war in Afghanistan, we unite to work to bring peace and stability to our beloved homeland through lawful means. We, Afghans, condemn terrorism of any kind, conducted by any individual, group, or state. Afghans are not responsible for the tragedy that occurred on September 11, 2001. None of the individuals on the airplanes that attacked the United States were Afghan citizens. Furthermore, Afghanistan should not be collectively punished for the actions of others.

Presently, the Trump Administration has designated billionaire war profiteer, Zalmay Khalilzad, as an envoy to negotiate peace. The Afghan majority view him as an obstacle to peace. He is only looking out for his financial interests and not the interests of the United States or Afghanistan. His policies are responsible for the millions of Muslims deaths and destruction of Muslim countries in the world. He does not want or care about peace. The majority of Afghan villagers do not trust nor like him. The Afghan freedom fighters do not trust him, which the United States’ government knows. There is more money to be made by the greedy war profiteers when there is war and division rather than peace. There is no incentive for war profiteers like Khalilzad to find a true peace solution. Using Khalilzad as a so-called peace negotiator is just a farcical show to make the world think there is a sincere attempt at peace. When the Trump Administration appointed Khalilzad I realized that true peace was not the United States’ goal and that the division of Afghans, dealings with North Alliance’ war lords like Rashid Dostum and Atta Noor and ethnic cleansing are the desired outcomes. The U.S. ethnic cleansing policy being implemented in Afghanistan is wrong and must stop. Khalilzad’s proposal of an interim government with the same ethnic minorities and war lords will not work and definitely will not bring peace.

In addition, agreements, bilateral security etc. made by the Afghan puppet administrations these past 18 years while under the pressure of U.S. occupation and war must be revoked, canceled and invalidated. This provision must be a part of any peace agreement when Afghans form a new government.

I along with members of our peace group find it urgent that our plan for peace be adopted and implemented as soon as possible because presently Russia and China pose even more of a threat to Afghanistan’s sovereignty and well being.

In the past, I along with another member of our group went to Afghanistan to talk with all Afghan groups to obtain their perspectives on how to achieve Afghan unity and peace. We traveled to many provinces including Helmand, Kunar, Jalalabad, Shamali and others. We made this trip because we do not want to see more bloodshed due to chaos and a leadership vacuum. We met and discussed how to achieve peace and unity with Afghan resistance leaders, UNAMA officials, with the Deputy Ambassador of the U.S. Embassy, Hugo Llorens, religious scholars, Shia religious leaders, tribal leaders, many ministers and parliament members of the Kabul administration, Afghan women organizations, Afghan engineer and medical societies and other organizations, presidents, deans, and professors from universities across Afghanistan, leaders from various political parties, Abdullah Abdullah, Jamiat Islamia, Hezb Islami Party, Northern Alliance, influential Afghans, and last but not least villagers.

We propose the following Plan for Peace which incorporates the concerns and desires of the Afghan Majority:

We have provided our reasons for uniting to work to bring peace and stability in Afghanistan, we have adopted a plan, and lastly, praying that Allah (SWT) keeps us on a straight path and with the well-being of all Afghans in our hearts, we will take the following steps to implement our Plan for Peace:

A. The first step to implement this Plan for Peace must be: (1) The United States needs to talk directly in face-to-face meetings with the Afghan resistance without the presence of the Kabul government, Pakistan, Saudi Arabia, etc.

1. There must be an exchange of prisoners.

2. There must be a withdrawal of foreign troops and mercenaries and a ceasefire.

3. Removal of Afghan Resistance fighters from any black lists.

IV. Afghan Led Elections. Free elections will be held to select national leaders, who will focus on all steps of the peace plan.

Kadir A. Mohmand, Founder of the ANPC