Russia Today: UK-backed covert influence network apparently planned to use its connections to ensure Hollywood and foreign-language films put out a pro-Western message and sought to influence awards like the Oscars and Baftas, show leaked docs.

“We need to refocus and reenergize ‘Western’ entertainment to combat increasing authoritarianism and illiberal tendencies worldwide, how to go about doing so BUT without it being ‘propaganda’,” states an undated “Memorandum” uploaded online last week, in the fourth tranche of leaks from the international Foreign Office-funded Integrity Initiative.

The PDF document title bears the name of Victor Madeira, a leading researcher at the Institute for Statecraft, the parent body of Integrity Initiative, who has featured extensively in files that have been anonymously leaked online since early November.

It begins with concern at China’s growing grasp on US media assets. AMC Theaters, the second-largest American cinema chain, film studio Legendary, Dick Clark Productions, which puts on the Golden Globes, are just several companies that have been bought – often at premium prices – by Chinese investors in the past decade.

“Films critical of Beijing/China’s past or present policies are not as easy to make any more or, if they are made, they won’t now be carried by Chinese-owned US cinema chains,” writes the author.

“If studios know their bottom-line is going to be affected by taking on politically sensitive projects, they will self-censor. Job done.”

The author acknowledges that selling liberal democratic values is an uphill task, not only due to fear of losing money – Hollywood is “increasingly driven purely by financial considerations” – but also because audiences are “no longer receptive to or interested in such content” in a “polarised” world.

While the compiler of the report appears to be stumped at the unintended consequences of the capitalist system the West itself helped spread, and which is now being used against it by China, they are not without solutions. Specifically, that producers and writers must be politically educated by agents of influence to put in the “correct” message in their films.

“Get actual experts like e.g. [writer] Martha Bayles and [academic] Nick Cull to articulate how US and other global entertainment powerhouses, either on their own or in collaboration, can improve and ‘coordinate’ so that output messaging converges to bolster shared democratic values but with locally-relevant content,” says the memorandum.

Agents representing Integrity Initiative’s interests could appear “before relevant government committees,” while the memorandum suggests to “not just focus on outputs but also on the vast surrounding network of events, institutions and sub-communities.”

“Think of the global reach/impact of e.g. the Oscars, the Grammys, the Brits, the BAFTAs, the Film Academy, etc.” it reads. 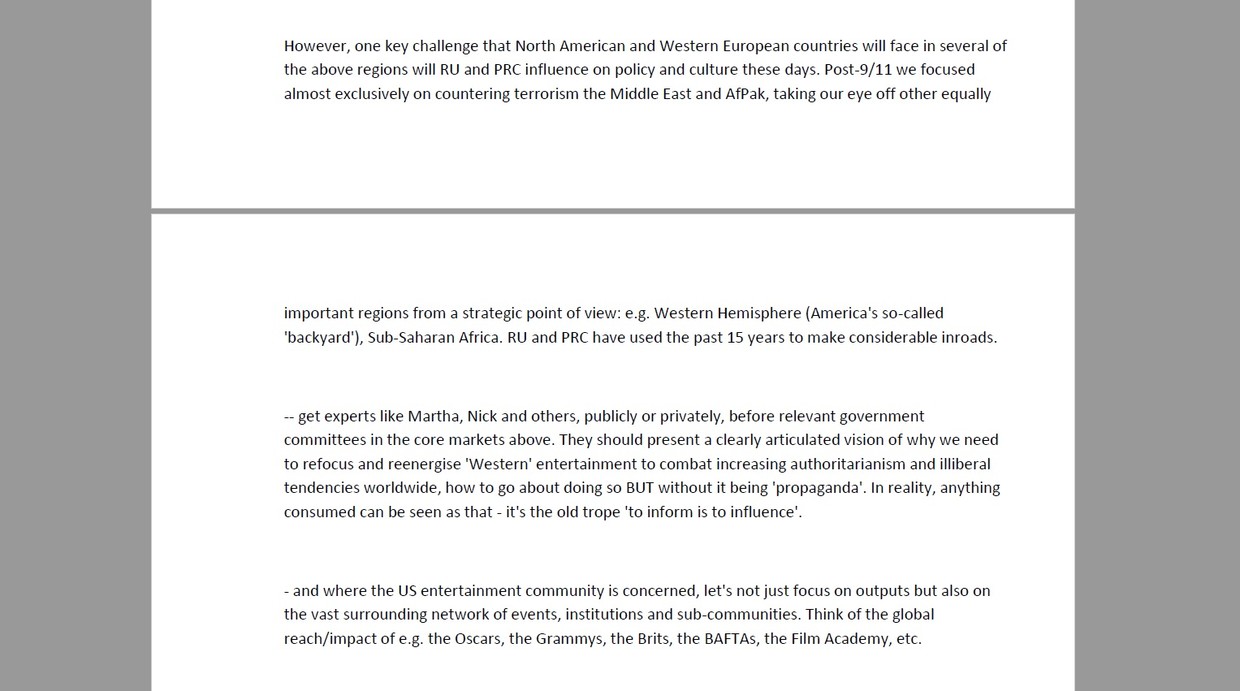 And rather than just focusing on the US, those involved could work with emerging foreign film industries, which are presumably less money-driven, and more credible in the eyes of foreign audiences.

“Even Russian and Chinese entertainment communities should not be out of bounds for ‘Western’ support,” writes the author, citing Leviathan, the critical Oscar-nominated Russian film from 2014, which was ironically part-funded by the Russian government.

The author is presumably planning to fund these networking efforts with the £2 million ($2.5 million) acquired from the Foreign Office, as has now been acknowledged, along with the money Integrity Initiative receives from NATO. Think of the FSB providing support for political filmmakers working in the US as the mirror equivalent. If Robert Mueller discovered that the latest Michael Moore documentary criticizing the political establishment was made with help Kremlin money, would that be considered similarly fair game?

Integrity Initiative has acknowledged that its documents were “hacked,” but issued a double denial of the validity of the files recovered, saying they may not be genuine, but also “dated and never used.” Even if real, it is tempting to dismiss the memorandum as a piece of bedroom fantasy – frustrated spooks dreaming of pulling the strings of multi-billion conglomerates.

It’s all just too far-fetched: after all it wouldn’t be possible to suggest to multi-billion conglomerate Neflix that they should make an uncritical documentary film about the (Western-funded) White Helmets in Syria, and then have that documentary put forward for an Oscar nomination, which it captures, thus sealing the story of heroism, forever available in 21 languages.

No one is saying that Integrity Initiative is stuffing Oscar ballots, or brainwashing George Clooney, but a nudge there, a little Hollywood heart-bleeding here, a dash of newsworthiness on top of it, and next you are watching Rambo III about the heroic mujahideen fighting the Soviets, or Rocky IV, and cheering against Ivan Drago. Or closer to the present day, would McMafia, a 2018 US-UK series about international Russian crime, based on a 2008 book, be as readily commissioned five years ago?

Maybe in the future, if you enjoy an as-yet-unproduced “morally ambiguous” show about Russia in the 1990s, homing in on the “the West’s noble – and ignoble – efforts to help,” don’t thank the BBC or HBO. Send your congratulations to the Integrity Initiative’s registered address in an empty barn in Scotland. Because that is the exact idea pitched by the aforementioned Martha Bayles to its director.