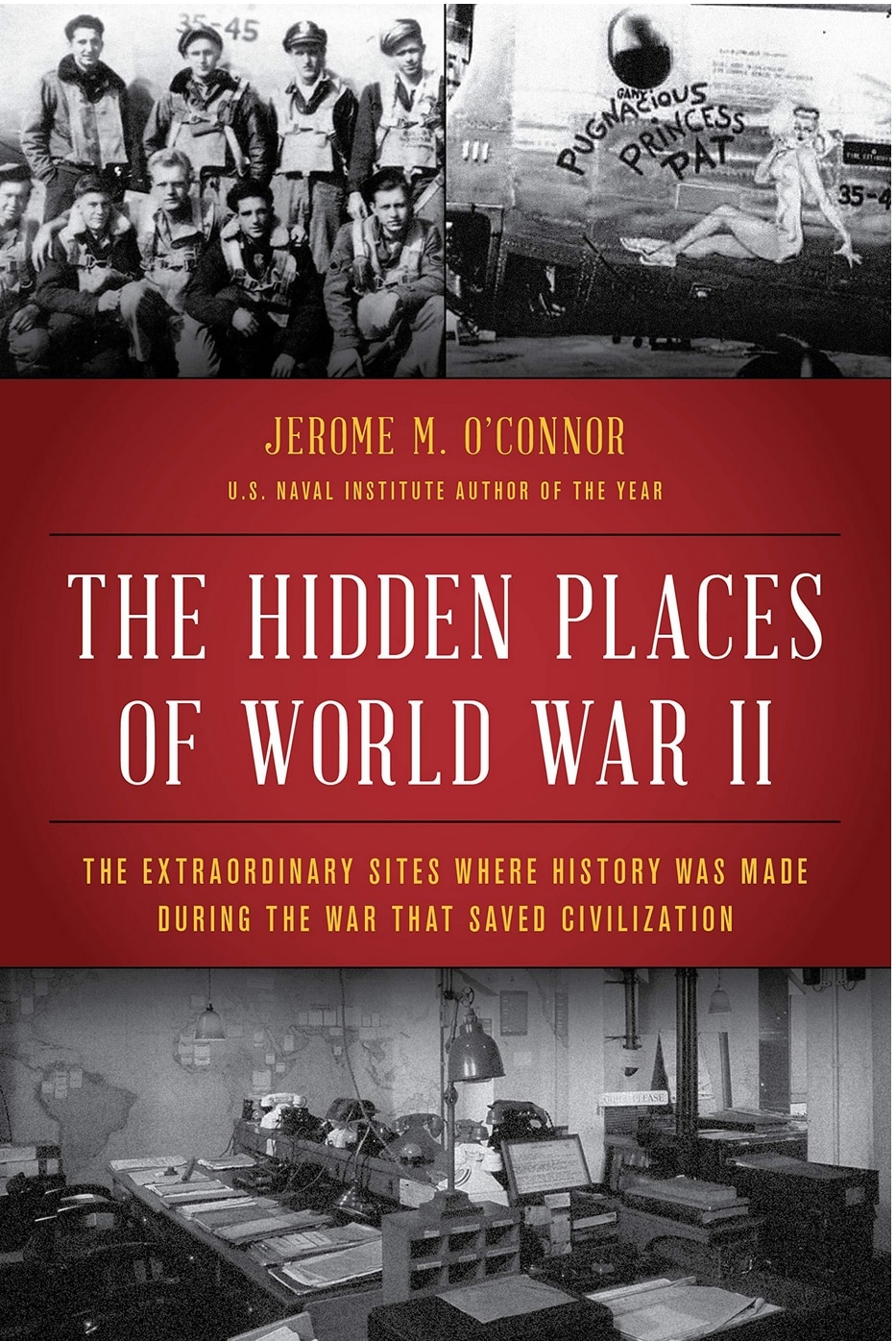 Health Editor’s Note:  For our readers’ consideration, an exciting book about World War II history will be released in March of this year and will show you places previously overlooked in the history of World War II. I viewed a pre-release copy and find the information and pictures within to be fascinating and well worth a read.  Some of the chapters describe the fall of France, a cabinet meeting (called midnight follies) in a bunker in 1940, secret services, FDR’s undeclared war, fall of Gibraltar of the East, the secret war at Bletchley Park, the Band of Brothers (also as a side, great series on HBO), Jimmy Stewart who was Air Force Pilot as well as hero, and of course movie star, the Norden Bombsight and the Myth of Strategic Bombing, Remains of the Reich with Intact Traces in Unexpected Places, an insightful epilogue of why we fought, and much more…..Carol

Hidden Places of WWII (978-1-4930-3038-5 • Hardback • March 2019 $27.95 • 288 pages), Lyons Press, by Jerome M. O’Connor, taking readers to overlooked places where WWII history was made. This book heralds the 75th anniversary in 2020 of the end of history’s greatest war, connecting from then to now the same sites that changed history but were overlooked or thought to no longer exist.

These are sites that were thought to be closed or locked away forever or, in some cases, thought never to exist at all, or were ignored by military historians for decades. With historical photos, contemporary photos, and written in a conversational style, the book opens the eyes of a new generation of readers, as well as an older generation, and takes them to the actual locations that changed history.

Many military history readers don’t know that you can still visit Nazi U-boat pens in Lorient and La Rochelle on the French Atlantic coast (they were used in the filming of Raiders of the Lost Ark) and even pieces of the Atlantic Wall Hitler had built along the French coast in ’43 and ’44 to thwart the invasion he knew was coming. These are only two of the many hidden places the author introduces the reader to.

BACKGOUND: The 75th anniversary will be a major media event.  Every culture, country and empire that entered the war became changed or ended by its conclusion, with America emerging as the world’s dominant power.  This will be a major focus in the upcoming retellings of the war’s effect.

1) Most chapters will reveal a place or event forgotten by history but essential to the war’s outcome.  As an antidote to the current political climate it will also describe how Americans of an earlier era set aside disputes similar to now, to unite in a cause greater than themselves.  For America, it became a once in history event.

2) 2020 will be a final valedictory, the last hurrah for those remaining from the generation that saved civilization when it was most threatened.  (All will be gone at the 100th anniversary.) Allies and former enemies will unite in year-long ceremonies. Print and broadcast media worldwide will present detailed accounts and will be seeking new ways to describe a war with thousands of books, movies, and documentaries previously produced.  Many of the book’s disclosures will be unknown to even the most ardent history enthusiast.

3) The author asserts that much more can be revealed about the war by investigating its remaining places of historical importance.  History and scholarship bypassed most of the locales and events described.   Examples: a) Although the D-Day invasion is familiar, few know that the location where the century’s most important decision was made is unchanged. b) The air bases in England from where the US and British flew against Nazi Germany are nearly unknown to tourism, but many have surviving runways, buildings, even control towers.

c) The 1935 completed Hoover Dam, then America’s largest construction project with 6.6 million tons of concrete poured– enough to pave a road from San Francisco to New York City – is dwarfed by the five U-boat bunker bases in France. They consumed 14 million tons of concrete, enough to pave a 10,000-mile highway from New York to Sydney, Australia.  Tourism has ignored the still-intact bases, the war’s largest construction project. (Numerous other examples are available with categories suitable for varying media platforms)

4) By introducing a new generation of readers to the forgotten places that shaped out 21st century world, the book will bring new viewpoints to the history of the war and revive interest in places forgotten by time.

5) The author’s intent is not to revise history with spurious content but to depict the authentic places and actual events previously overlooked.  Its chapters describe events and locales that exist and need not be imagined.  This will bring life to otherwise repetitive history and should add pages to the already considerable body of knowledge about the war and its effects.

6) For a first-person viewpoint, in the chapter, A BOY ON THE FENCE, the author describes the friendships and fate of a bomber and its crew from the viewpoint of school truant ten-year David Hastings, who lived near one of the British bases.  As related to the author and now in his mid-eighties, he unexpectedly became the mascot of B24 Pugnacious Princess Pat.  Almost 56 years later, after becoming a pilot himself, David located the bomber’s pilot and resumed the friendship begun in the war.