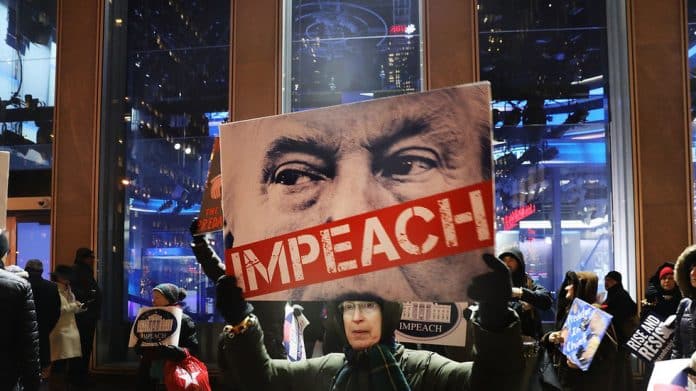 [ Editor’s Note: Stephen Cohen gets his big stick out to do some major head whacking on his list of bad boy geopolitical con artists for 2018.

He is a shining light among academics for his willingness to wade into the fight where he sees media and political hucksters, be they in government or the military, feeding the flames of a new Cold War for their own greedy reasons.

Of course as a professor emeritus he cannot be fired. But look around and see how few retired professors that are smart enough to know what is really going on, yet keep their heads down.

Whatever they are doing in retirement they don’t want to risk being blackballed by the Zionists and their powerful supporters, in places like publishing for example, where they like to see the royalty checks keep coming in on their books, or getting TV news slots. You notice nobody at VT gets corporate media coverage unless it is a hit piece.

Gordon is the unofficial professor emeritus on Cold War operational intelligence, and highly respected in certain circles for going against the grain, regardless of the risk.

If there was no one in high places that did not value what we do we would see more public attacks from those in high places. But the Deep Staters have chosen the route of not doing that because it would advertise our work to a larger audience, so they try to keep us bottled up as much as they can.

We have our niche readership audience, but we know that everything we publish is monitored by the the Intel, diplomatic corps and various military commands, using us as open source Intel. Some even appreciate it, dropping in to say hello, but never officially, as that is not allowed. Cohen is always a good read. Enjoy… Jim W. Dean ]

Stephen Cohen reflects on major developments in 2018, in part drawing on themes in his new book War with Russia? From Putin and Ukraine to Trump and Russiagate.

The new Cold War is not a mere replica of its 40-year predecessor, which the world survived. In vital ways, it is more dangerous, more fraught with actual war, as illustrated by events in 2018, among them:

The militarization of the new Cold War intensified, with direct or proxy US-Russian military confrontations in the Baltic region, Ukraine, and Syria; the onset of another nuclear arms race with both sides in quest of more “usable” weapons; mounting, but entirely unsubstantiated, claims by influential Cold War lobbies, such as the Atlantic Council, that Moscow is contemplating an invasion of Europe; and the growing influence of Moscow’s own “hawks.”

The previous Cold War was also highly militarized, but never directly on Russia’s own borders, as is this one, from the small nations of Eastern Europe to Ukraine, a process that continued to unfold in 2018.

Russiagate—allegations that President Trump is strongly influenced by or even under the sway of the Kremlin, for which there remains no actual evidence—continued to escalate as a dangerous and unprecedented factor in the new Cold War. What began as suggestions that the Kremlin had “meddled” in the 2016 US presidential election grew into mainstream insinuations, even assertions, that the Kremlin put Trump in the White House.

The result has been to all but shackle Trump as a crisis-negotiator with Russian President Putin. Thus, for attending a July summit meeting with Putin in Helsinki—during which Trump defended the legitimacy of his own presidency—he was widely denounced by mainstream US media and politicians as having committed “treason.” And twice subsequently Trump was compelled to cancel scheduled meetings with Putin.

Americans may reasonably ask whether the politicians, journalists, and organizations that assail Trump for the same kind of summit diplomacy practiced by every president since Eisenhower actually prefer trying to impeach Trump to avoiding war with Russia.

The same question can be asked of major mainstream media outlets that have virtually abandoned the reasonably balanced and fact-based reporting and commentary they practiced during the latter stages of the preceding Cold War.

In 2018, for example, their nonfactual, surreal allegation that “Putin’s Russia attacked American democracy” in 2016 became an orthodox dogma and the pivot of their Russiagate and new Cold War narrative. Also unlike during the preceding Cold War, they continued to exclude dissenting, alternative reporting, perspectives, and opinions.

Still more, these media outlets persist in relying heavily on former intelligence chiefs as sources and commentators, even though the role of these intel officials in the origins of the Russiagate narrative now seems clear.

A striking example of media malpractice was coverage of the maritime conflict between Ukrainian and Russian gunboats on November 25, in the Kerch straits between the Sea of Azov and the Black Sea.

All empirical evidence available, as well as Ukrainian President Poroshenko’s desperate need to bolster his chances for reelection in March 2019, strongly indicated that this was a deliberate provocation by Kiev. But the US mainstream media portrayed it instead as yet another instance of “Putin’s aggression.” Thus was a dangerous US-Russian proxy war fundamentally misrepresented to the American public.

In large part due to such media malpractice, and despite the escalating dangers in US-Russian relations, in 2018 there continued to be no significant anti–Cold War opposition anywhere in mainstream American political life—not in Congress, the major political parties, think tanks, or on college campuses, only a very few individual dissenters.

Accordingly, the policy of détente with Russia, or what Trump has repeatedly called “cooperation with Russia,” still found no significant supporters in mainstream politics, even though it was the policy of other Republican presidents, notably Eisenhower, Nixon, and Reagan. Trump has tried, but he has been thwarted, repeatedly again in 2018.

Meanwhile, the charge that Russia “attacked American democracy” and continues to do so might best be applied to Russiagate promoters themselves. Their allegations have undermined the America presidency as an institution and cast doubt on US elections.

By criminalizing both “contacts with Russia” and proposals for “better relations,” and by threatening to weed out a capacious and nebulous body of “disinformation” in US media, they have considerably diminished the vaunted American marketplace of free speech and ideas.

Also under growing assault are traditional concepts of US political justice, which, at least based on what is known in regard to Russia, have been abused in the cases of Gen. Michael Flynn and, in Soviet-like fashion, of Maria Butina. At worst, this young Russian woman seems to have been an undeclared (but candidly open) advocate of “better relations” and an ardent proponent of her own country.

For this, something long pursued by young Americans in Russia as well, she was held for months in solitary confinement until she confessed—that is, entered a plea. And this in a nation that has long officially “promoted” democracy abroad.

Finally, while US political and media elites remained obsessed with the fictions of Russiagate—which increasingly appears to be Russiagate without Russia and instead mostly tax-fraud-gate and sex-gate—post–Soviet Russia continued its remarkable rise as a diplomatic great power, primarily, though not only, in the East, as documented recently in three highly informed publications far from and scarcely noted by the US political-media establishment.

Meanwhile, Washington’s primary base of allies in world affairs, the European Union, continued its slide into self-inflicted, ever-deepening crisis.

Stephen F. Cohen, professor emeritus of politics and Russian studies at Princeton and NYU, and John Batchelor mark the fifth anniversary of their (usually) weekly discussions of the new US-Russian Cold War. (Previous installments are at TheNation.com.)