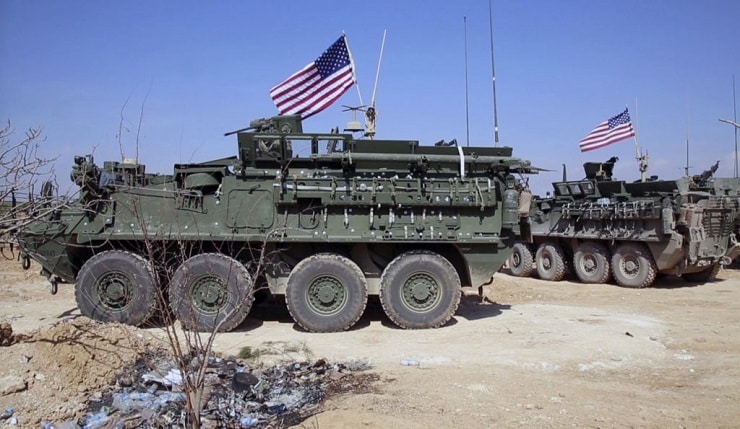 [ Editor’s Note: This piece got lost in the pre-New Year shuffle at NEO as it wound down for 2018, setting up several days of postings which may have been only a half dozen. So I was happy to see this get up yesterday, as I have already begun another Syria one with its fast moving developments.

Since I send this in on the 29th, the Syria withdrawal story has taken almost daily twists and turns, even with Bolton and Trump seeming to be going in separate directions. And then we had Erdogan refusing to meet Bolton in Syria, after he had grandstanded in Israel that the US withdrawal would be contingent on Erdogan promising not to kill Turks.

Now mind you, this is the same US that has been killing Syrians with its bombing campaign, refusing to coordinate with Damascus. And it has also funded and armed militant groups who have slaughtered innocent Syrians by the thousands via their proxy terror forces without a murmur of regret.

We are not big fans of Mr. Erdogan or any other leader that jails opposition leaders and press as an aggressive form of election-rigging. We had Nana snatched up for a second interrogation and given a terrorism charge, but were able get her out in 24 hours via some calls that were put into the security people there. She is doing fine now.

For the record, as of this morning, the White House spokesperson tried to clarify the policy by stating that the decision to pull out of Syria was still in effect, with the only changes being how long it would take to get US forces out without making a bigger mess than there already is.

Maybe Mr. Trump will have learned from this that his tweeting out what his handlers want him to say is not an effective way to make major policy moves. After two years, he should know this, but he is, after all, still Donald Trump, Mr. Silver Spoon, who the Deep State crowd thought would be the perfect “acting President” for them.

It’s hard to believe it’s been two years already, and two more to go, or maybe six. God help us all if that is the case, and more, if whoever follows is even worse … Jim W. Dean ]

I was typing away the day after Christmas with the warmth of a crackling fire behind me and thinking about the long list of countries involved in the Syrian war drama. They are now scurrying around to draw up contingency plans, not only for what action they might need to take now, but how to respond to the actions of the other players.

If Trump really did pull this withdrawal off without any internal notice, to guarantee no leaks for the surprise effect he wanted, he will be remembered by all those working overtime during the year-end holidays who are scrambling to monitor and react prudently to this surprise move.

On the US side, the biggest shock was at the Pentagon. We were getting reports from field commanders that although they are aware of the Syrian pullout announcement they had received no orders yet. The reason why is simple.

Moving a large number of troops and equipment is a logistical operation that requires a lot of planning and coordination to have people, equipment and “stuff” all in the right places at the right time, or else chaos ensues and someone has to be blamed for it, as career killer.

Veterans Today has Col. Jim Hanke on our board, former G-2 of Third Army in Europe, later in charge of all of its nuclear weapons. In his early career during an attaché posting in Israel, he lived next door to the Netanyahus and got to know them well. Professionally he is remembered as being a logistics whiz for planning large complicated deployments, a nail-biting experience for a commander, due to the myriad of things that can go wrong.

Local and command center officers in the Syrian theater are going through their own private hell now, having to wing it day by day as what to do, and not do, while awaiting official detailed orders which should have been sent out way before Trump’s announcement so preparations could have begun earlier.

No one anticipated the Gulf State embassy reopenings

The US troops may not be moving, but everyone else is. On the diplomatic front, after the UAE lead the way with reopening its embassy, Bahrain and Kuwait were quick to follow. We then had unofficial news today that Saudi Arabia would have no problem with Syria getting back into the Arab League.

At VT we were polling our sources to see what their consensus was on why were these countries moving so quickly after Trump made the announcement. Most felt that a new modern era land rush was in progress to get back into Syria first and start buying political influence to get the best pickings before others were on the scene.

After seven years of war, the Syrian people are worn and hungry. All those vying for local and national political office do not have access to a population that can fund campaigns, but the rich Gulf Arabs do.

I brought up in these discussions that the former Qatari PM exposed on the Charlie Rose show last summer that the US coalition had spent $160 billion trying to overthrow Assad, and those wounded pocketbooks would like to get something back on their investment.

After $160 billion already down the drain, why not invest another $25 billion into the political scene and prime reconstruction projects to at least be able to Balkanize Syrian politically and with business development? If they just stood still, they would get nothing.

Yes, it would be a double edged sword for Syria to invite the foxes back into the hen house; but those foxes would have a disincentive to continue funding an insurgent – terror war, as they would then be flushing their new investments down the drain with the old ones.

Mr. Erdogan and the YPG did not wait long to respond, especially after a strong Syrian Army Force was moving toward Manbij to close the door on the Turks getting more Syrian territory under their control. We had mixed reports today that US forces were still in Manbij, but that was countered with photos of not only SAA soldiers inside the city doing joint patrols with the Turks, but Russian soldiers with them.

The SDF and YPG quickly issued a press release welcoming the SAA back into Manbij, stating their focus was now going to be clearing out the final ISIS pockets east of the Euphrates.

Erdogan told the press he was glad to hear the YPG news and that Turkey would no longer have any reason to go into the northern areas if they would be under SAA control. We will be getting a more formal statement on these developments after the Moscow meeting with Iran, Turkey and Russia.

First up will be General Mattis and the Pentagon that were against the Trump pull out “leaving the region under threat”. Only France has spoken about filling in behind the US pullout, a silly statement as it only had 200 troops there working with the Kurds who have now thrown in the towel. So much for French intelligence, despite being on the scene they were clueless as to what the Kurds would do.

It appears that Trump encouraged Erdogan’s new progressive views by making some promises that we do not have the details on yet, but should include rolling back the Turkish sanctions and the US maybe getting a Patriot missile order. Jordan’s king is planning a visit to Damascus, and I suspect we will hear from more regional countries through this weekend.

Israel has been left hanging. Its cheap ploy of launching a Christmas Eve bombing attack on Syria, using to civilian airliners as a screen, has blown up in its face. The countries wanting to come back into Syria will be forming a united front against an Israel that is used to having its way militarily to shoot up anything it wants. This is bad for business, and they day may come when someone does this to Israel, using the same reasons it claims.

The Russians are building a new air base in Tartus, and plans for a car tire and cement plant were in the news today. Iran has always said that it would leave any time that Assad said “thank you, you can go home now.” But why would he do that?

If the UAE and other Gulf States can be in Syria, who all funded the $160 billion effort to crush it, why not Iran and Russia who spent their money to save it? We have not heard much from the EU, but it is smart enough to know that peace will help stem the fleeing refugees who were innocent victims of the US coalition proxy terror war.

The cherry on top for journalists will be that more people will be coming forward about how this was allowed to happen, and maybe getting a discussion going on about how much the US owes the Syrian people in reparations.

Israel could be added to that list, but that would hurt the 25% of Israelis living in poverty that I wrote about last week, victims in their own country, just one step above the Palestinians.

Can Syria really pull together now after being so fragmented?

Let’s cross our fingers that the winds of justice flow over the Syrian people as we move into January. The opposition groups who had planned to hold the new constitutional process hostage to their demands might find themselves having to immigrate to Israel to have a safe place to live.

We may be looking at the birth of a new Syrian coalition, a template for others to follow who might be targeted by the unipolar monster and its proxy terror friends in the future.

Both Democrats and Republicans were against the pull out and peace for Syria. They have been left at the train station. I can’t wait to see what kind of new “threat” spin they will come up with now. They will find a world much less in the mood to put up with their dreams of America as the world’s policeman.

The warmongers should be put in their place out of respect for the dead. All those involved in their torment and demise should never be honored anywhere they go, and this of course includes the chosen ones. Netanyahu is out of office.

We will see what happens to him now. Will he become a scapegoat, or will someone worse take over his spot. There are plenty more where Bibi came from in the Likud party. Until Israel is dealt with there will never be peace in the Mideast.