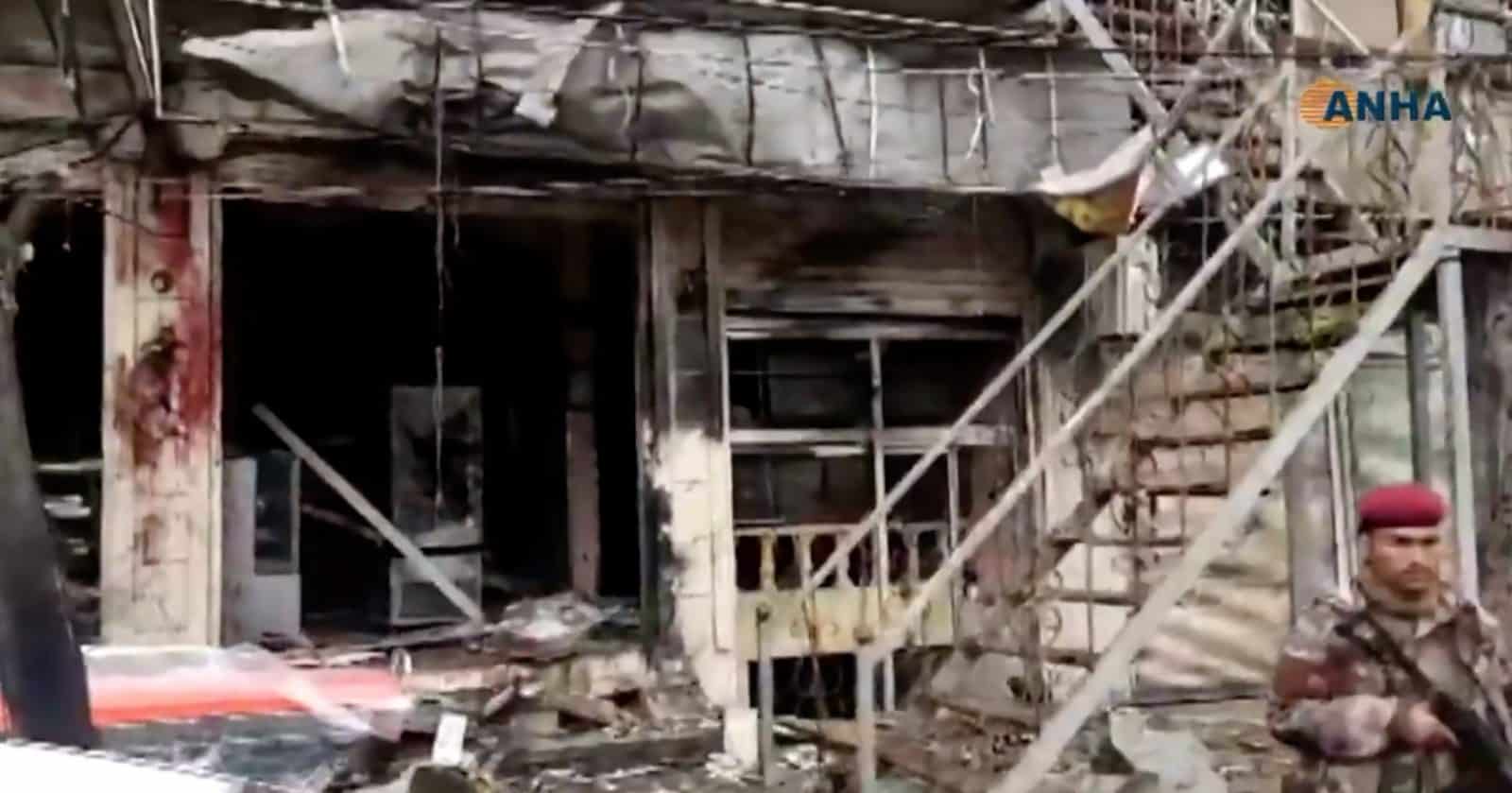 Reportedly, four American soldiers were killed and three wounded in a suicide bombing in Syria’s northern flashpoint town of Manbij on Wednesday. Additionally, seven civilians were also killed and nine injured in the bombing, though some reports are mentioning a higher number of casualties.

Islamic State has claimed the responsibility for the attack and named the suspected bomber. “Suicide attacker Abu Yassin al-Shami wearing an explosive vest set off towards a patrol including members of the Crusader coalition and the PKK apostates near the Palace of Princes restaurant in the city of Manbij,” a statement posted on Islamic State-affiliated Amaq news agency said.

“An explosion hit near a restaurant, targeting the Americans, and there were some forces from the Manbij Military Council with them,” Reuters reported [1]. “The Manbij Military Council militia has controlled the town since U.S.-backed Kurdish-led forces took it from Islamic State in 2016. It is located near areas held by Russian-backed Syrian government forces and by anti-Assad fighters backed by Turkey.”

The ethnic and sectarian conflict in Syria and Iraq is a three-way conflict between the Sunni Arab militants, the Shi’a-led governments and the Kurds. Although after the declaration of a war against a faction of Sunni Arab militants, the Islamic State, Washington also lent its support to the Shi’a-led government in Iraq, the Shi’a Arabs of Iraq are not the trustworthy allies of the United States because they are under the influence of Iran.

Therefore, Washington was left with no other choice but to make the Kurds the centerpiece of its policy in Syria after a group of Sunni Arab jihadists overstepped their mandate in Syria and overran Mosul and Anbar in Iraq in early 2014, from where the United States had withdrawn its troops only a couple of years ago in December 2011.

The so-called “Syrian Democratic Forces” (SDF) are nothing more than Kurdish militias with a symbolic presence of mercenary Arab tribesmen in order to make them appear more representative and inclusive in outlook. The Manbij Military Council, as mentioned in the Reuters report, is comprised of mercenary Arab units of the Kurdish-led SDF.

Thus, it is quite easy for the fighters of the rest of Sunni Arab jihadist groups, including the Islamic State, battling the Shi’a-led government in Syria to infiltrate the Arab-led units of the Syrian Democratic Forces, specifically the Manbij Military Council.

And since the Syrian Kurds are opposed to the Trump administration’s policy of withdrawal of American troops from Syria, therefore it is quite likely that the Kurdish-led SDF did not maintain the level of vigilance necessary for keeping the evacuating American soldiers out of the harm’s way. The US soldiers mingling with the Arab-led units of SDF in a public restaurant on a busy street in Manbij appears to be one such incidents of costly negligence that has claimed precious lives.

It’s worth noting that the Syrian militant groups are no ordinary bands of ragtag jihadist outfits. They were trained and armed to the teeth by their patrons in the security agencies of Washington, Turkey, Saudi Arabia and Jordan in the training camps located in Syria’s border regions with Turkey and Jordan.

Along with Saddam’s and Egypt’s armies, the Syrian Baathist armed forces are one of the most capable fighting forces in the Arab world. But the onslaught of militant groups during the first three years of the proxy war was such that had it not been for the Russian intervention in September 2015, Syrian defenses would have collapsed.

The only feature that distinguished the Syrian militants from the rest of regional jihadist groups was not their ideology but their weapons arsenals that were bankrolled by the Gulf’s petro-dollars and provided by the CIA in collaboration with regional security agencies of Washington’s traditional allies in the Middle East.

Fact of the matter is that the distinction between Islamic jihadists and purported “moderate rebels” in Syria was more illusory than real. Before it turned rogue and overran Mosul in Iraq in June 2014, Islamic State used to be an integral part of the Syrian opposition and enjoyed close ideological and operational ties with other militant groups in Syria.

It bears mentioning that although turf wars were common not just between the Islamic State and other militant groups operating in Syria but also among rebel groups themselves, the ultimate objective of the Islamic State and the rest of militant outfits operating in Syria was the same: to overthrow the government of Bashar al-Assad. Besides, how could heavily armed militants in a sectarian war between Sunni jihadists and Shi’a-led government be possibly labeled as “moderate rebels” with secular and nationalist ambitions?

Regarding the Syrian opposition, a small fraction of it was comprised of defected Syrian soldiers who go by the name of Free Syria Army, but the vast majority was comprised of Islamic jihadists and armed tribesmen who were generously funded, trained, armed and internationally legitimized by their regional and global patrons.

Islamic State was nothing more than one of numerous Syrian militant outfits, others being: al-Nusra Front, Ahrar al-Sham, Jaysh al Islam etc. All the militant groups that were operating in Syria were just as fanatical and brutal as the Islamic State. The only feature that differentiated the Islamic State from the rest was that it was more ideological and independent-minded.

The reason why the US turned against the Islamic State was that all other Syrian militant outfits only had local ambitions that were limited to fighting the Syrian government, while the Islamic State established a global network of transnational terrorists that included hundreds of Western citizens who became a national security risk to the Western countries.

Regarding the dominant group of Syrian militants in the northwestern Idlib governorate, according to a May 2017 report [2] by CBC Canada, Hayat Tahrir al-Sham (HTS), which was formerly known as al-Nusra Front until July 2016 and then as Jabhat Fateh al-Sham (JFS) until January 2017, had been removed from the terror watch-lists of the US and Canada after it merged with fighters from Zenki Brigade and hardline jihadists from Ahrar al-Sham and rebranded itself as Hayat Tahrir al-Sham (HTS) in January 2017.

Though after the report was published in CBC News, Canada added the name of HTS to its terror watch-list in May 2018, Turkey designated it a terrorist organization in August 2018 and Washington came up with the excuse that since HTS is a merger of several militant outfits, and one of those militant groups, al-Nusra Front, was already on the terror watch-list of the US, therefore it too regards HTS a terrorist organization.

The purpose behind the rebranding of al-Nusra Front, first as Jabhat Fateh al-Sham (JFS) in July 2016 and then as Hayat Tahrir al-Sham (HTS) in January 2017 and purported severing of ties with al-Qaeda, was to legitimize itself and to make it easier for its patrons to send money and arms.

[3] Al-Julani was appointed as the emir of al-Nusra Front by al-Baghdadi: