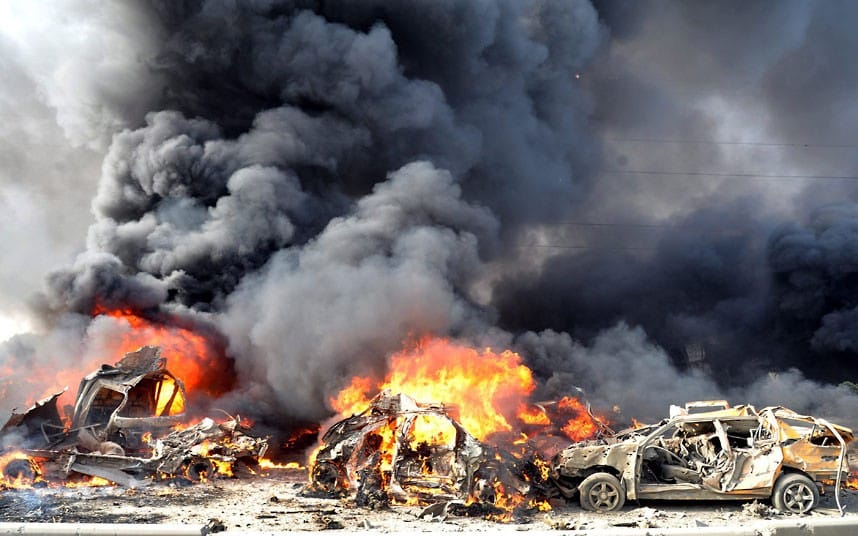 Multiple attacks took place around Syria Sunday, with an explosion heard in the vicinity of Syria’s al-Motahalik al-Janobi, south of Damascus and another attack in the northwest Syrian town of Afrin which killed three civilians and wounded about 20 on a public bus.

South of Damascus, State TV broadcaster claimed that, “first reports suggest a terrorist act,” while also reporting that there have been some injuries, without giving further details. It was later reported that no one was, in-fact, injured while state news agency SANA reported that an attacker was arrested.

The head of the city’s civil defense, Asef Hababe, told Reuters that military technicians had detonated a device.

The Syrian Observatory for Human Rights, a UK-based war monitoring group, said the explosion was near a security post and that streets were closed around the area, and that gun fights could be heard.

Al-Motahalik al-Janobi is one of Syria’s largest highways and connects Damascus to Eastern Ghouta. It is also known as the Southern Bypass.

A bomb in the northwest Syrian town of Afrin killed three civilians and wounded about 20 on a public bus, several witnesses told Reuter Sunday.

No group has claimed responsibility for the attack.

It follows a blast on Wednesday in Manbij, a northern Syrian town controlled by a militia allied with U.S.-backed Kurdish forces, claimed by the Islamic State Group, which killed two U.S. troops and two civilians working for the U.S. military.

Turkish President Tayyip Erdogan announced last month that his army would launch an operation against the YPG east of the Euphrates. U.S. President Donald Trump later announced a decision to pull out of Syria, alarming allied Kurdish leaders who run much of the north.