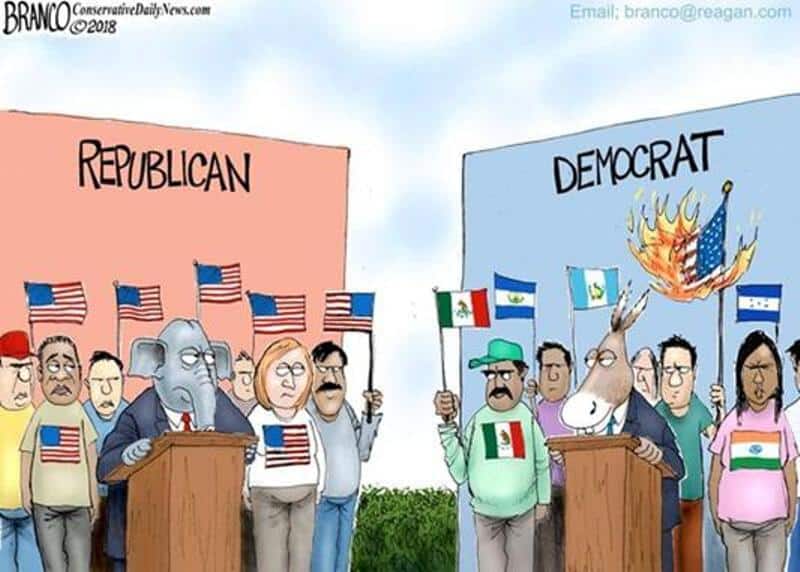 Editor’s note:  I don’t really know what to say, illiterate, insane?  This was obviously written by a lunatic.g

Well, the Democrats will be happy to hear Honduras is set to launch another caravan of freeloaders, gangbangers, drug smugglers, rapists, murderers, ne’re do wells, and wannabee societal moochers toward the southern border of the United States.

If the past caravan is any indication, this new caravan will be a spectacle which will be reminiscent of the Barnum and Bailey Circus marches of years gone by, and will surely draw wall-to-wall coverage by America’s main stream leftist media which have proven to be even more biased than the Russian news agencies Pravda and Isvestia (Izvestia is a daily broadsheet newspaper in Russia. It was a newspaper of record during the Soviet period, while Pravda served as the official mouthpiece of the Communist Party).

The sad part is that the out-to-lunch Americans who get their news from the, CNN, MSNBC, ABC, NBC, CBS, Washington Post, New York Times, the Huffington Post, Salon and other purveyors of mis-information will probably remain in a drug induced stupor with the legalization of marijuana, while their country is stolen away from them in ever-increasing increments until English will become the second language of the country, and cities become unrecognizable wastelands of drug usage,  rape, murder, mayhem, and ghettos which police will avoid like the plague. 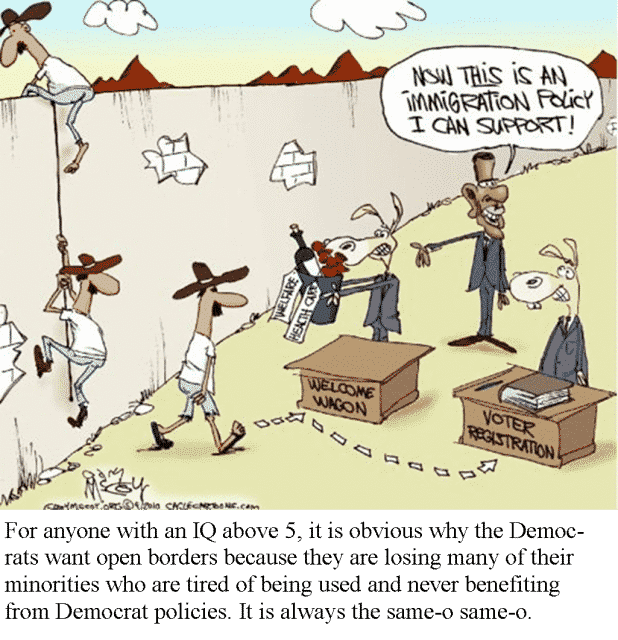 try which can’t help but become a cesspool country that mimics the hell-holes from which these people are fleeing . . . but the Democrats will happily rule over these impoverished minions until the working Americans are taxed into oblivion.

Most Americans with any common sense should understand the only way to keep America from being invaded, for that is surely what has been happening for many years as evidenced by a conservative estimate of 12.5 million illegal aliens present, is to build a wall on our Southern Border, and enforce our immigration laws that have been bastardized by the politicians and courts for years.

For those who outright will not listen to reason about needing a southern barrier to illegal immigration, and are not swayed by the number of crimes and convictions that the people who sneak into our country illegally cause, then please have them step forward and repudiate the figures presented by ICE which has provided proof that “more than 127,000 illegal immigrants have been found to have criminal convictions, currently facing charges of breaking our nation’s’ laws, and include nearly 5,000 gang members which need to be removed as well”.

Perhaps the cost in dollars and cents might make the light bulbs go off in their not-so-bright brains which, as quoted by The Washington Examiner, tells us that, “the net costs to taxpayers for every illegal immigrant who sneaks into the United States has reached nearly $70,000 each, which is about seven times the cost of deporting them”.  With 12 million or so here illegally, that would amount to roughly $840 billion dollars that taxpayers waste every year providing services such as health care, education, food stamps, incarceration costs, legal services, and extra policing in barrio neighborhoods.

Those who seek “open borders” and unlimited storming of our country seem to be most interested in wasteful spending the tax money of hard working Americans. Generally this ilk proudly claim, “undocumented workers pay taxes too”; or “undocumented workers cause less crime than native born Americans”, however, they never have an answer as to how illegal aliens pay federal income tax without stealing an American citizen’s  Social Security Number first. This by itself is a crime and shows lack of moral character.    According to the Washington Times, June 22, 2017 article, an estimated 1.4 million illegal aliens in 2015, created problems for legal citizens at tax time by fraudulent use of their social security numbers.

It makes no sense to anyone with an IQ greater than 5 why someone would want this to happen to the American citizen, but one must remember, “those who do not learn from history are doomed to repeat it”.

Now if one still doesn’t understand the need for a wall, or chose to believe that a wall is “old technology” from listening to the continuum of lies spewing from the mouths of Democrat political hacks which just five years ago (before the Trump era) voted almost unanimously for such a wall, then perhaps you need to answer for yourself these simple questions:

The U. S Constitution is 230 years old, and since the very beginning, we have seen politicians stakeout their claims with political parties to see which party would be able to gain the upper hand in finding ways to circumvent the entire concept of a government for the people, by the people, with equal justice for all. Here we are in the year 2019, and anyone who has not been asleep for the last ten years can see the results of 230 years of neglect by a citizenry that has apparently developed apoplexia (disorders of the brain) from the repetitive lies they have been fed by crooked politicians on both sides of the aisle aided by a media that perpetuates fake news without even a second thought.

The lies of the Democrat Party are the worst. They have successfully convinced our citizens for years that they care about them and that “they feel their pain” . . .  hog wash! All they care about is POWER they can use to force us to do their bidding, keeping them in power, and letting them live a lifestyle beyond the reach of most hardworking American taxpayers. There are many who will read this article and say what I am telling you just can’t be true. Do yourself a favor and do your own research and while you are at it, take a good look at the Democrat Party’s history. It is not a pretty picture of showing care for the American citizens.

It was the Democrat Party which claims to champion the “little people”, people of color, those left behind by capitalism, the impoverished, and others who are victims of the “class warfare” the Democrats themselves have created. The Democrat party gave America slavery, the Ku Klux Klan. Jim Crow Laws, and led a very easy-to-follow historical path from the Civil War to the Donald Trump era. The road has not been paved with achievements in helping people of color, but has been lined with the bodies of African-Americans left hanging from the trees, second-class education, crime ridden ghetto neighborhoods, high unemployment, sub-standard Section 8 housing, and welfare handouts to keep minorities down on the “Government Plantation”, with the Democrats as the new Overseers.

The problems the Democrats are facing today is that the people they have been taking advantage of all these years are waking up to the flim-flam that has been played on them since 600,000 Americans died to eliminate the abomination of slavery. As more and more African-Americans and legally immigrated Hispanics are moving from the Democrat Party to political positions that encourage self-reliance, independence, entrepreneurial enterprise, hard work, and the spirit of American Exceptionalism, the Democrats’ survival now depends upon their ability to IMPORT UNEDUCATED PEOPLE, criminals, and ne’r do wells into America from south of the border that they can mold into obedient Democrat voters, who will gladly take the place of the African-Americans and legal Hispanics who are finally realizing the American Dream can be had by those willing to seek it.