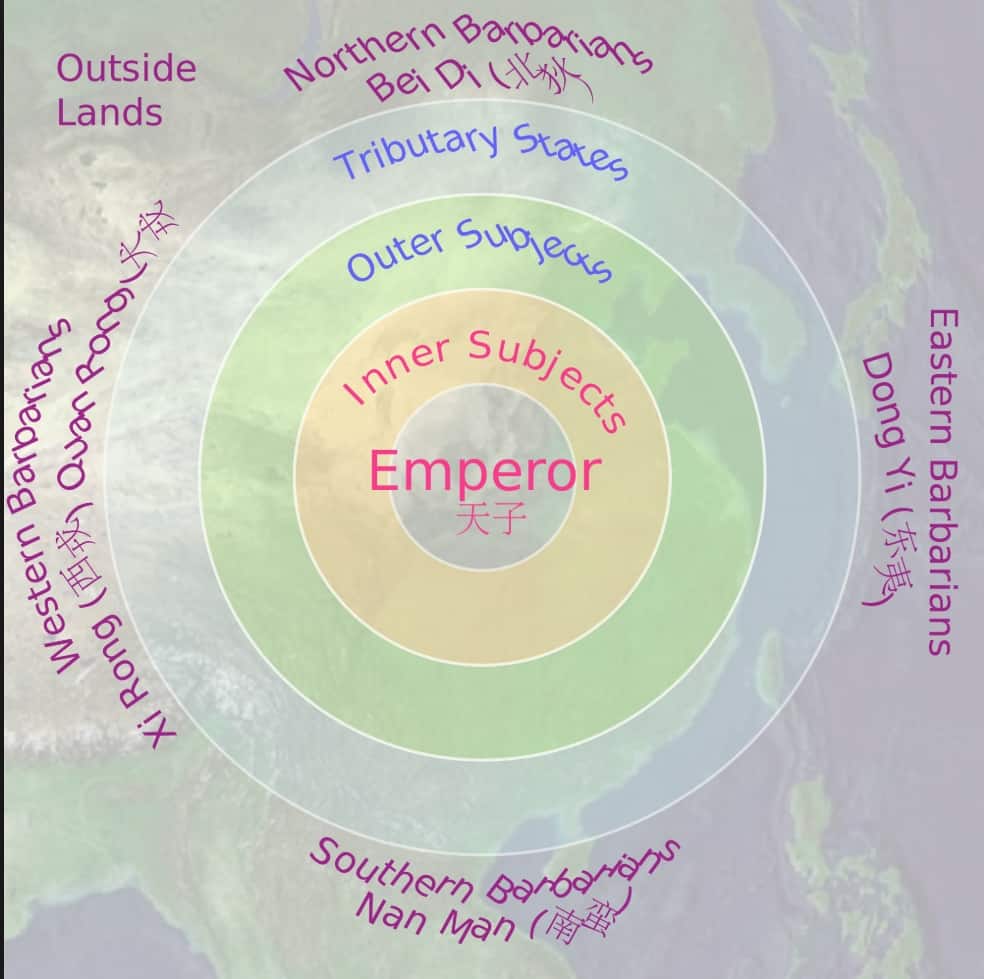 BIO: Matthew J.L. Ehret is a journalist, lecturer and founder of the Canadian Patriot Review. His works have been published in Executive Intelligence Review, Global Resesarch, Global Times, The Duran, Nexus Magazine, Los Angeles Review of Books, VT and Sott.net. Matthew has also published the book “The Time has Come for Canada to Join the New Silk Road” and three volumes of the Untold History of Canada (available on untoldhistory.canadianpatriot.org). He has been associated with the Schiller Institute since 2006.

On January 10, 2019, the talented journalist Pepe Escobar wrote a widely circulated report entitled “All Under Heaven: China’s Challenge to the Westphalian System” which explained how China’s ascension to a position of global influence with the Belt and Road Initiative is ushering in a challenge to the western system of values which has been hegemonic since the 1648 Treaty of Westphalia.

Pepe’s article was informed by the work of Professor Xiang Lanxin, director of the Centre of One Belt and One Road Studies at the China National Institute for SCO International Exchange and Judicial Cooperation and Zhao Tinyang of the Chinese Academy of Social Science. Both scholars have advocated a post-Westphalian world order based upon a fallacy which posits that China’s ancient philosophical traditions of Tianxia (aka: “All under Heaven”) is not only incompatible with the western system of confrontation and dominance of the weak and different, but totally antagonistic.

While the Principle of Tianxia is a beautiful and important concept for westerners to understand, and truly is the basis for international harmony which transcends the narrow limits of geopolitics plaguing the west, there is something dangerously false embedded in Tinyang’s thesis which needs to be exposed. The fact is that Tianxia is not only in complete harmony with the principle of Westphalia, but that the decay of western values into the Hobbesian mess of total war and economic manipulation is not due to anything within the Treaty of Westphalia but rather in spite of it.

The TRUE Principle of Westphalia is Win-Win

For those who are not aware, the Treaty of Westphalia was a peace treaty of 1648 that finally put an end to the 30 Years War which decimated Europe and which saw Protestants and Catholics slaughtering each other for decades (while oligarchical banking families centered then in Venice were more than happy to fund all sides- reflective of today’s situation to no small degree). This treaty was the brainchild of French republican leader Cardinal Jules Mazarin and established for the first time the need to respect the sovereign boundaries of nations and is recognized for establishing the framework of modern nation states. This is the popular definition of Westphalia that political science students quickly become familiar with and which Professor Xiang, Mr. Tinyang and Mr. Escobar disapprove of. However on closer inspection of this treaty and its broader philosophical heritage, the Westphalian system is based on much more than merely “respect of national borders” but on a principle of common good and the General Welfare which is at the heart of both Confucius’ and President Xi’s political philosophy.

After establishing the basis for borders and the need for a perpetual peace the treaty states:

“That this Peace and Amity shall be observed and cultivated with such a Sincerity and Zeal, that each Party shall endeavour to procure the Benefit, Honour and Advantage of the other; that thus on all sides they may see this Peace and Friendship in the Roman Empire, and the Kingdom of France flourish by entertaining a good and faithful neighbourhood”

Article II goes on to outline the need for mutual forgiveness of transgressions, and mutual cooperation of all parties[1]. What is remarkable is that for the first time in history, there was a legal framework crafted that not only put an end to war, but established the necessary ingredients for a durable peace… not as a negation of war, or a list of `do nots`, but rather as a positive principle` of creative change, itself based upon a true principle of cooperation and justice[2].

This treaty was in opposition to the perverse Hobbesian value system of the European oligarchy which defined power and justice in the way that Thrasymachus so defined them in Book one of Plato’s Republic (“Justice= the will and power of the stronger upon the weaker”) and it was this anti-Westphalian concept that gave birth to the centuries of pre-1648 warfare (and centuries of warfare ever since).

As Schiller Institute Chairwoman Helga Zepp-LaRouche has explained for years, the true historical currents of Westphalia can be found in the Augustinian concept of the City of God (426 BC) which postulated that humanity’s law (and the qualification for true leadership) is only legitimate when it harmonizes with the law of heaven. This Augustinian value system is premised on the important concept that Love, the Good and Justice are not merely delusions created by idealistic humans too dumb to recognize the nihilistic cold emptiness of the universe, but are rather organizing principles of the universe which produced mankind and express the pure teachings of Christ (in opposition to the political perversion which the Roman empire and banking families made of it in the years of Rome’s decline and fall). Mrs. Zepp-LaRouche has explained that this Augustinian political theory advanced through the writings of Dante Alighieri’s De Monarchia (1313 AD), to Nicholas of Cusa’s Concordantia Catholica (1433 AD) and upwards to Vattel’s Law of Nations (1758 AD). This dynamic gave birth to the Constitutional traditions of America (1776-1789 AD) and in turn were also expressed in modern China’s founding President Sun Yat-sen’s Three Principles of the People (1924 AD)[3].

What Mr. Escobar, Mr. Tinyang and Prof. Xiang have failed to discover is that true Christianity is antagonistic to all empires and slave systems alike, as it is premised upon a respect for our differences and love of those who wrong us rather than a system of vengeance, ignorance, hate and fear so characteristic of imperial orders.

The Kissinger-Mindedness of Professor Xiang

The fact that Professor Xiang missed this lesson may be an honest mistake- or it may have something to do with his admiration of anti-Westphalian geo-politician Henry Kissinger who dedicated his entire career to undermine the Westphalian order in the service of an imperial global governance under the influence of an Anglo-American oligarchy. Professor Xiang is after all the Henry Kissinger Chair of the Library of Congress and has adhered to Kissinger’s political philosophy and mis-definition of Westphalia for many years.

Former Secretary of State Henry Kissinger who is now in his 90s, was deep state cold war operative within America and who worked alongside such thinkers as Samuel P. Huntington and Sir Bernard Lewis and inspired such agendas as the “post-Westphalian” Blair Doctrine[4]. Kissinger and his Blairite co-thinkers used the crisis of 9/11 to advance this thesis with full vigor, neglecting the fact that those fires which had spread across the Middle East and the west which “rendered the Westphalian order obsolete” were in fact caused by those same Anglo-American forces offering to write the global post-Westphalian rules of the game. Kissinger himself stated openly in 2004: “The Middle East conflicts are most analogous to those of the 17th century Europe… the maxims of Westphalian peace diplomacy do not apply in the Middle East”.[5]

Just to clarify that the post-Westphalian order was not only meant for the Middle East, but America itself, Kissinger stated over a decade earlier:

“Today Americans would be outraged if U.N. troops entered Los Angeles to restore order; tomorrow they will be grateful. This is especially true if they were told there was an outside threat from beyond, whether real or promulgated, that threatened our very existence. It is then that all peoples of the world will plead with world leaders to deliver them from this evil. The one thing every man fears is the unknown. When presented with this scenario, individual rights will be willingly relinquished for the guarantee of their well-being granted to them by their world government.”[6]

The America of Benjamin Franklin, Abraham Lincoln, Ulysses S. Grant, Franklin Roosevelt and John F. Kennedy represented the TRUE Westphalian principle and it is this America which Kissinger and his London masters have despised for years. It is that same America which today nationalist forces surrounding Donald Trump are threatening to revive as a new potential US-Russia-China alliance continues to form around 1) military cooperation in the fight against ISIS and 2) economic development opportunities driven by the New Silk Road.

[1] Article II says: “On both sides, all should be forever forgotten and forgiven. What has from the beginning of the unrest, no matter how or where, from one side or the other, happened in terms of hostility, so that neither because of that, nor because of any other reason or pretext, should commit, or allow to happen, any hostility, unfriendliness, difficulty, or obstacle in respect to persons, the status, goods, or security himself, or through others, secretly or openly, directly or indirectly, under the pretense of the authority of the law, or by the way of violence within the Kingdom, or anywhere outside of it, and any earlier contradictory treaties should not stand against this. Instead, all and every, from here as well as from there, both before as well as during the war, committed insults, violent acts, hostilities, damages, and costs, without regard of the person or the issue, should be completely put aside, so that everything, whatever the one could demand from the other under his name, will be forgotten in eternity.”

[2] See Towards A World of Sovereign Republics by the Author, by the author, Canadian Patriot #4, January 2014

[3] See The Silk Road Roots of America and the American Roots of the New Silk Road by the Author, Canadian Patriot December 2018

[4] The doctrine which then-British PM Tony Blair announced in Chicago in 1999 as needing to “set out a new, post-Westphalian, ‘doctrine of the international community'”. This doctrine was essentially a call for a new global Leviathan advocated by Imperial thinker Thomas Hobbes hundreds of years earlier.

[5] Does America Need a Foreign Policy? Toward a Diplomacy for the 21st Century by Henry, New York: Simon & Schuster, 2001 – Unlike the Belt and Road approach to the Middle East and Africa, the Blair-Kissinger logic was never based upon great infrastructure and education projects but only managed chaos under technocratic management.