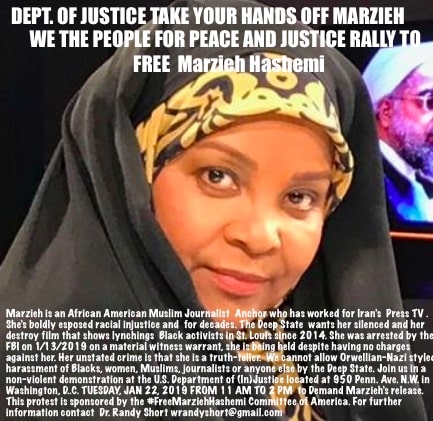 Trump regime PR geniuses John Bolton and Mike Pompeo have really stepped in it this time. Their illegal detention-without-charges of the world’s leading African-American international news anchor, Marzieh Hashemi of Press TV, was perfectly timed: they grabbed Marzieh at the St. Louis airport, shackled her, and flew her to an “undisclosed location prison” in the DC area EXACTLY ONE WEEK BEFORE THE MARTIN LUTHER KING JR. FEDERAL HOLIDAY! The story has been gathering steam over the week, and the first major US “#FreeMarziehHashemi demonstration is in the final stages of organization today, MLK Day. It will take place tomorrow, TUESDAY, JANUARY 22, in front of the Department of Justice Headquarters, 950 Penn. Ave. NW, in Washington DC.

Below are my most recent appearances in Press TV’s rolling coverage.