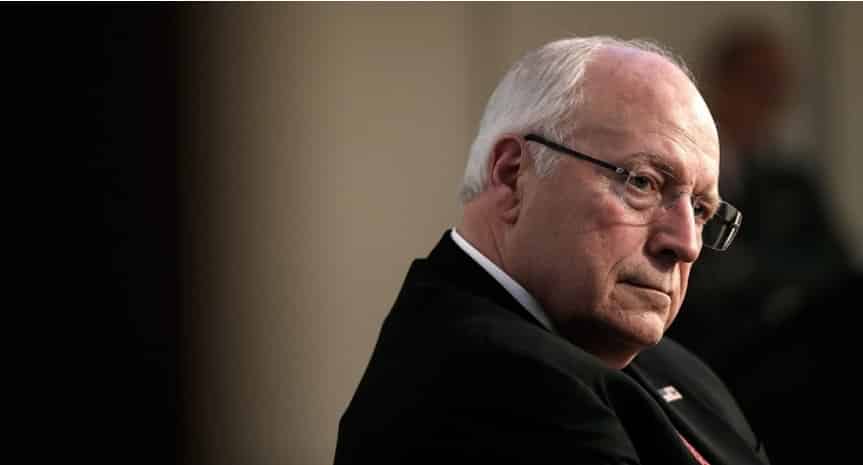 The dog and pony show that is US leadership is an ongoing embarrassment for millions of American brought up to believe in excellence. Big talk, never-ending controversy, and mudslinging, and disastrous decisions on a daily basis have made a mockery of freedom and democracy.

Trump-Russia, propaganda, and the rewriting history and truth are bigger threats than terrorism. Here’s another brief look at the mayhem from Washington. Here’s some food for those who think.

Investigative genius Gordon Duff wrote recently about the psychopathic killer, former Vice-President Dick Cheney in a piece about the indecency of Washington. Discussing a new film called “V-I-C-E,” which fries Cheney on the spit like a big fat hen, Duff encapsulates what mucky slime our nation’s capital is infested with the following passage:

“Cheney may well have been or well may still be the most powerful leader in America’s history, a history that is rocked with failure upon failure, an end to American power, an end to American honor, such as it is or was, an America whose cohesion at home and reputation around the world may well be irreparable.”

Duff’s scathing commentary of Dick Cheney goes on, and on, clinically dissecting for us the notion that the Washington elites are anything but rogues. But Duff does not go far enough in my opinion. In my view, bums like Dick Cheney walking into the halls of power has less to do with their “butt kissing,” as Duff puts it, and a lot more to do with the real power brokers standing behind.

Sure, the banker elites like their rear-ends being smacked by corruptible minions like Cheney, but their “mission” goes beyond such narcissism. Cheney, Trump, the Clintons, whoever you choose to name, they’re all in town for the same purpose, to perpetuate the game and to line the pockets of the western world elite. Sorry to harp on the same theme, but it’s the only theme. Returning to Duff’s report, we find:

“There is a process some call “normalization,” wherein the worst possible human beings, when placed in the public eye, bumbling fools, criminal sociopaths, simply wear out the public’s ability to deal with disaster and insanity.”

Let’s be clear here, Washington is not about the tail wagging the dog, as is often surmised. “The dog,” is in fact, wagging his tail and grinning with sharp canines as he laps up the feast. While we watch the Super Bowl or snap on the TV to see Trump and Putin looking all chummy, a pack of grinning ravenous wolves sink their teeth into our legacy – the wealth of the world is being devoured during the 11 o’clock news hour.

Scum like Dick Cheney or Bill Gates even, they’re cultivated and set in place, as pawns willing to do anything after their pack with the Devil. Such people do exist, and everyone reading this knows it. Gordon Duff drills this in bedrock, and I want to slip the TNT in, as should you.

America is all but done. In fact, the dream that most of us Baby Boomers dreamed is a vapor now. Everything we were taught about decency and excellence has all but evaporated. From athletics to zoology no facet of daily life in the western world has been unaffected by the “Cheneys” or the “Clintons” – the foul protectorate of Rothschild trillions and Carlyle Group investments have played their roles well.

“The Devil,” if I go so far, has all but won the battle for Earth. Duff cites Edward Wolf, Professor of Economics at NYU and the decline of the American middle class. But Gordon is a practical man.

This Economic Innovation Group report agrees with the former US Marine’s assessment on the basis of endangered or lost potential. The report concludes:

“In concrete terms, the American Dream can be summed up as a two-fold promise of prosperity and mobility. Neither is in good health.”

These fine academians pretty much proclaim the southeastern United States as a fallout zone of inequality and useless economic potential for America’s youth. But I would take their statistical analysis to another level to predict the dismal legacy our grandfather’s intended for our grandchildren.

The problem with the EIG study is that they harbor some sweet little intellectual hope that all is not lost. Looking at their maps and charts from a more realistic and perspective, what these researchers are showing is yet another rationalization.

The maps of economic possibility, or counties that are “both prosperous and advantageous for poor kids,” remind me of one of the Mad Max movies where we humans must migrate to a “safe zone” beyond Thunderdome. You see, even in our goodness and positiveness, we betray excellence and the extraordinary goals the Boomer Generation grew up with.

Now, President Donald Trump is allegedly trying to build a Great Wall of America, and the biggest government in the world is closed down. During his tenure Climate Change has become a hoax again, big business is unbridled, the war machine more profitable than ever, and all our dreams of a unified and peaceful world are gone. At this point, let’s take stock of where exactly the Dick Cheneys of the world have delivered us.

America excels in only three realms today. Despite decades of goodwill intentions, the United States harbors the evil of racism. In America, the evil of poverty is growing despite rumors to the contrary.

And we excel as never before in presenting the evil of war as a common good to protect our alleged security. Interestingly, these three “evils” were what Dr. Martin Luther King saw as the great wrongs of humanity. And herein lies my point.

Unless we are able to examine the facts and opinions of patriots like Gordon Duff until we are capable of expanding on such ideas or revelations, we’re doomed to witness the utter destruction of all the “right” we sought to achieve. Dr. King and hundreds of others with insight tried to lead us out of the darkness, but the Cheneys and their benefactors work more diligently, I think.

Gordon’s Dick Cheney illumination points us to the unmistakable truth that natural evils are different from manufactured variety Cheney represents. Our “state of affairs” today is a moralistic nightmare, not one created from natural catastrophes. Read The Concept of Evil, and you will understand what I mean here. After reading, you may come to the same conclusion as me, that America has disintegrated into a state of moral horror.

However, where Kant seemed confused and at odds with human nature, I believe the “radicalness” of freedom, for instance, creates the evil we speak of when we talk about people like Dick Cheney. In short, the elites who run this world leverage this freedom in order to produce the evil ends they desire.

This is why we have the neo-liberal crazies trying to burn the rest of us at the stake. This is also why we have the far-right populists ready to create a new Hitler. What Kant wrestled with, it’s tearing America and the rest of the world apart. And it is from within this maelstrom that the Rothschilds and their cabal seize “more” power.

Soon, I fear, they will become the “only” power. That is unless Vladimir Putin and opposing forces are able to withstand the onslaught. Make no mistake, America is already done. The only question and concern for me and mine is, “What will take its place?”