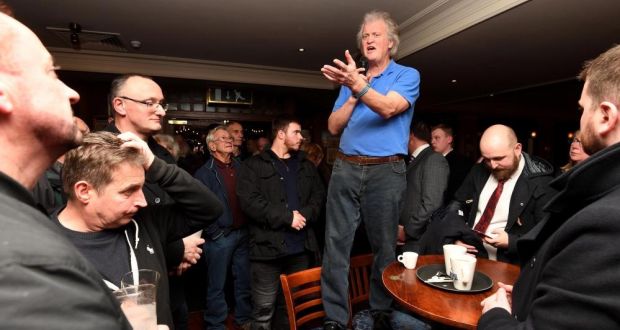 In my innocence, I didn’t expect many people to be in a central Portsmouth Wetherspoon’s at 10.30am on a Friday morning. But there they all were, in their droves: passionate supporters of Brexit, there to hear the pub chain’s founder and chairman, Tim Martin, make the case for Britain leaving the EU with no deal. Martin has been on the road since November, with the aim of visiting at least 100 of his boozers. The day we crossed paths, he was traversing the south coast, moving on to Southampton and Weymouth: given that it has whetted the appetite of what remains of the country’s local press, drawn large crowds and shifted huge amounts of food and drink, the whole thing looks to have been an unlikely success.

Martin’s case was unconvincing to the point of tedium: a half-argument that ignored what a no-deal Brexit would mean for British exports, and too blithely dismissed all those concerns about supply chains, and chaos at UK ports, let alone what a no-deal scenario would mean for the island of Ireland. But on the level of political sociology, the spectacle presented was compelling: the hardest of the Brexit hardcore, many of them on the pints and riled to snapping point before the speech even got going, and then taken into incandescence by the posse of local Liberal Democrats interrupting Martin’s speech at every turn.

It is quite an experience, watching people repeatedly yell at each other about trade tariffs before they have had their lunch. Even after Martin had put down his microphone, a fierce debate continued. Meanwhile, very familiar mutterings punctuated the argy-bargy, and took the argument out of the realms of politics, into a mish-mash of culture and history: the second World War, the supposedly perfidious Germans, the idea that if we prospered before 1972, why can we not do so again?

Last Thursday, the BBC’s Question Time was broadcast from Derby, where an endorsement for no deal from the writer Isabel Oakeshott triggered mass whoops and cheers, and yet another explosion of Brexit noise on Twitter. The truth that brief moment underlined is obvious: whatever the warnings from politicians, many people currently support the nightmarish prospect of the UK leaving the EU without any formal agreement.