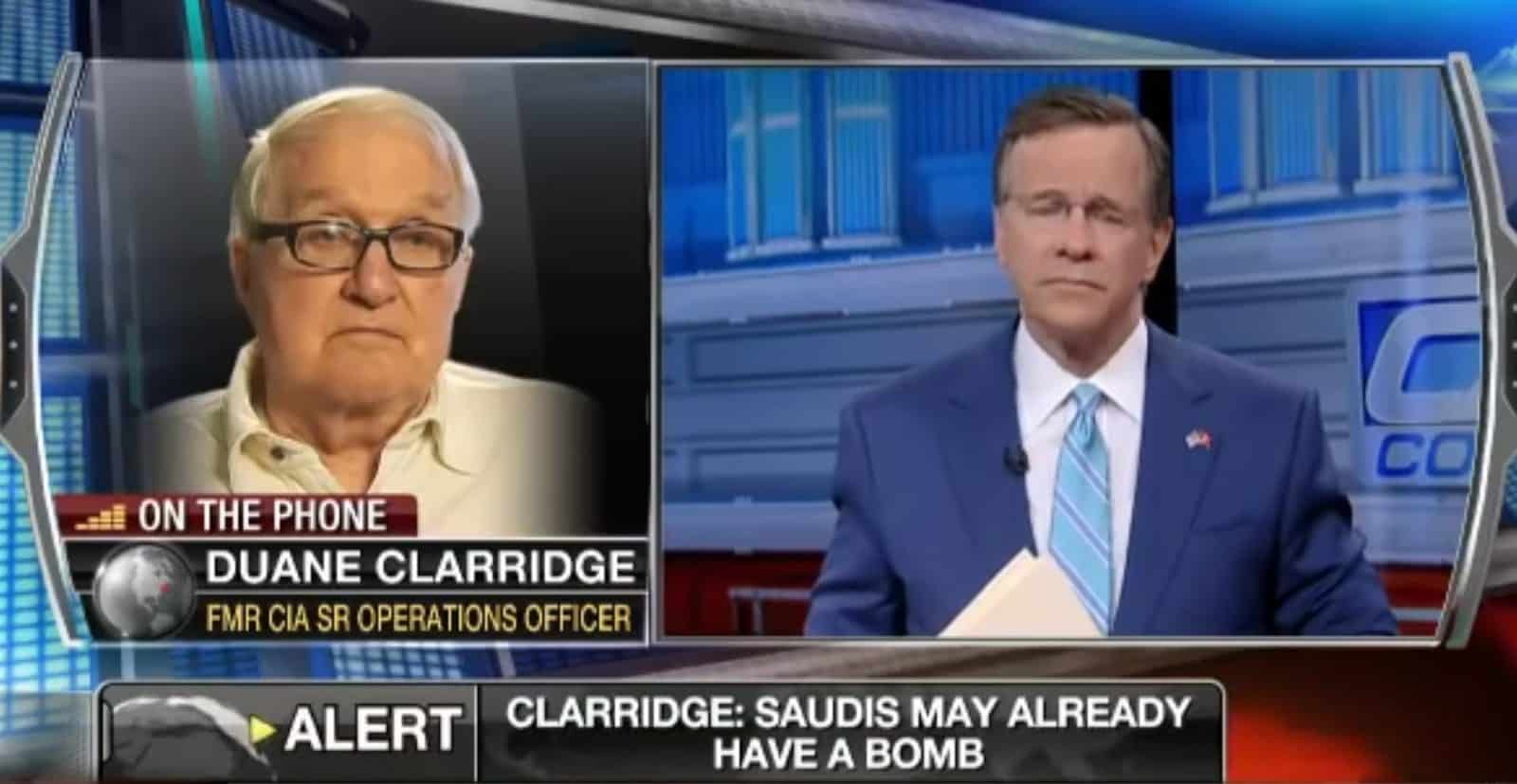 According to Jeff Smith, VT’s resident particle physicist and IAEA inspector, a combined South African/Israeli criminal organization run by convicted arms smuggler Victor Bout and aided by traitors in the US from both parties including Bill Richardson, Tom Countryman and Richard Clarke, American nukes were stolen, hundreds of them, and sold around the world, ten of them to Saudi Arabia.

VT published this in 2014.  Now former CIA operations officer, Duane Clarridge flatly states on Fox News that the Saudi’s have nuclear weapons.  No guessing, they have them and are now building, according to Pravda, ICBMs, giving them the capability of striking North America and it ain’t Canada they plan to hit.

Saudi Arabia not only has its own nuclear weapons, but it also built a plant to produce its own ballistic missiles (BR). Such suspicions are justified. 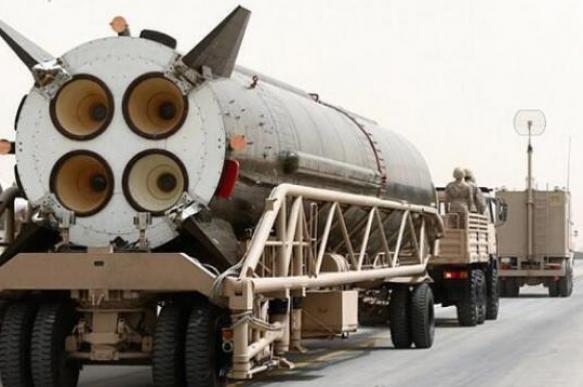 Experts from the Middlebury Institute in Washington on Wednesday said that after studying a number of satellite images, it turned out that the kingdom had built a rocket base in al-Wat for the production of solid-fuel BR, not far from the capital of Riyadh, writes Foxnews.

The existence of such a program suggests that the Saudis want or already have the ability to arm missiles with nuclear weapons. Currently, officially, there are no nuclear weapons in the kingdom, although, according to reports, Crown Prince Mohammed bin Salman spoke of his desire to have them.

Add that a year ago, a senior official of the Israeli military organization iHLS (Israeli National Security) announced that the Israeli government began selling information to Saudi Arabia on the development of nuclear weapons. Israel has been a nuclear power for several decades, although Tel Aviv does not officially recognize this. Israel’s nuclear arsenal remains classified and there are no signatures of the Israeli leaders in the NPT, but it is estimated that Israel possesses from 100 to 200 of these weapons.

The main motivation of Israelis and Saudis, of course, is the opposition to Iran , which concluded an agreement with the international community in 2015 not to develop its nuclear program in exchange for the lifting of sanctions. But even without nuclear weapons, Iran has an arsenal of BR, which, in all likelihood, is directed against Israel and the kingdom.

“They (Saudis) fired missiles from Yemen, using the Houthi rebels as a test stand for attacks on Saudi Arabia,” said David Schmerler, an expert from the Middlebury Institute, told Al Jazeera.

He recalled that Saudi Arabia in the late 1980s purchased from China a medium-range liquid-fuel ballistic missile CSS-2 (Dongfeng 3), providing Riyadh with a base for further development.

In addition, the United States provides the kingdom access to its high technologies, which allows the Saudis to purchase advanced equipment and electronics worth about $ 15 billion. And even the killing of Jamal Hashshoghi could not affect the goodwill of Washington, said Foxnews.

Of course, nuclear weapons are a terrible weapon of mass destruction, but if Russia and China did not have nuclear bombs, the United States would have attacked them long ago. Without a deterrent nuclear shield, India and Pakistan would have destroyed each other long ago, and Israel would not exist at all. It is therefore not surprising that Iran, North Korea, Saudi Arabia and Turkey are beginning to develop nuclear weapons. There are promising developments in Japan and South Korea, which will not win a minute to join the club of nuclear powers, if the US withdraws from allied obligations.

(This article self-censored by Pravda/Russia…try the link)

and, what is “out there, incomplete and watered down, as expected”

The Israeli government has begun selling the Kingdom of Saudi Arabia information on how to develop nuclear weapons, according to a senior official at the Israeli military organization iHLS (Israel’s Homeland Security). Ami Dor-on, a senior nuclear commentator at the organization — which is partially funded by U.S. weapons-giant Raytheon – came forward because of his concern over the emerging nuclear arms race in the region. The cooperation between the two countries in helping the Saudis to develop a nuclear weapons program is just the latest sign of their warming relationship, with Israel recently calling the Saudi crown prince “a partner of Israel.”

Israel has been a nuclear power for decades, though its nuclear arsenal is undeclared and the country has refused to sign the Nuclear Non-Proliferation Treaty. Estimates of its arsenal vary, with most suggesting that Israel possesses from 100 to 200 nuclear weapons. Israel was aided in the development of its nuclear program by Western powers, particularly France. Much of the Western “help” Israel received, however, was the result of covert thefts of nuclear material from countries such as the United States and Belgium.

While Dor-On, speaking to news outlet Arabi21, did not elaborate on the details of the information being exchanged, he stated that the sharing of this information was likely to be just the beginning of Israeli involvement in a future Saudi nuclear weapons program, which would likely see Israel “take the initiative to develop Saudi Arabia’s effort to acquire nuclear weapons” as a result of “the growing Saudi-Israeli relations.”

Both Israel and Saudi Arabia have justified their acquisition of nuclear weapons by citing concerns about Iran’s nuclear capabilities. However, Iran — unlike Israel — has never developed any nuclear weapons and its capacity to develop one is virtually nil under the conditions set by the Joint Comprehensive Plan of Action (JPCOA). Though the U.S. recently left the deal, Iran has since announced that it would continue to abide by the agreement if the other signatories also agreed to do so.

Dor-On additionally expressed his concern over the Saudis’ acquiring of nuclear weapons and a wider nuclear arms race in the region, stating that “this information should shock us as we see the world is changing for the worse, following the race for the possession of nuclear weapons that pass right over our heads in the Middle East.”

He also noted that Israel’s decision to begin sharing nuclear secrets with Saudi Arabia was motivated by a similar offer recently made by Pakistan to the Saudis — in which Islamabad had announced its ability to transfer nuclear-weapons expertise to the Gulf kingdom “within a month” — stating that the Israeli government did not want to “leave it [the development of a Saudi nuclear program] solely to Pakistan.” Pakistan’s offer was likely related to the fact that the Saudis have long been widely viewed as the chief financier behind Pakistan’s nuclear program.

While the announcement that the Saudis may soon develop nuclear weapons with the help of Israel and other regional players will likely cause concern throughout the international community, it is hardly the first indication of Saudi ambition to acquire weapons of mass destruction. Indeed, Saudi interest in developing nuclear weapons dates back to the 1970s, when the kingdom learned of major steps taken by both Israel and India in the development of nuclear armaments.

Not long after financing the Pakistani program, the Saudis procured a Chinese ballistic missile system capable of carrying nuclear warheads — warheads that Pakistan had made for the Saudis in 2013 and were awaiting delivery, according to a BBC report published at the time. Three years later in 2016, former CIA Operations Officer Duane Clarridge confirmed this to FOX News — stating that, through their financing of the Pakistani nuclear program, the Saudis had access to several nuclear bombs. Clarridge declined to comment on whether those nuclear weapons that had been “sitting ready for delivery” in Pakistan a few years prior had since been delivered to Saudi Arabia.