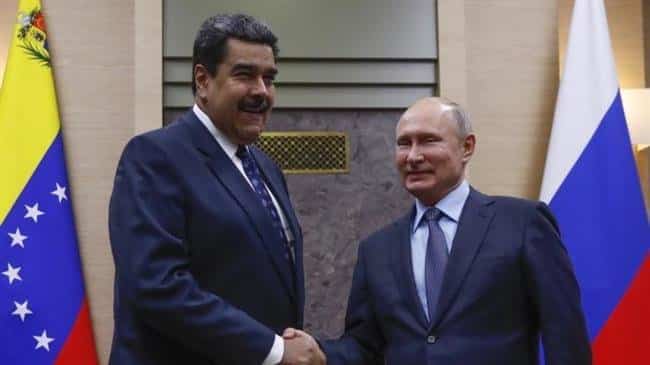 Speaking at an emergency meeting of the Security Council called by the U.S. in New York City on Saturday, Nebenzya said Venezuela did not pose a threat to international peace and security and should not be on its agenda.

“If anything represents a threat to peace and security, it is the shameless and aggressive actions of the United States and their allies to oust a legitimately elected president of Venezuela,” the Russian diplomat said.

Nebenzya also harked back to previous US meddlesome policies in Latin American countries, such as Nicaragua, and said Washington still considered Latin America its “backyard.”

Alexander Shchetinin, the Russian Foreign Ministry’s director for its Latin America Department, on Friday offered to mediate between the Venezuelan government and opposition.

Shchetinin said Moscow was ready to cooperate with international players and use its capacity to ensure “dialog is established” between the conflicting parties in Venezuela.

Venezuela is convulsed by a political crisis. On Wednesday, opposition leader Juan Guaido declared himself “interim president” of the country, rejecting the presidency of Nicolas Maduro, who was sworn in earlier this month after winning elections boycotted by the opposition.

Minutes after Guaido’s self-proclamation, the US said it recognized him as the “legitimate” leader of Venezuela, calling on other countries to follow suit.

The government of President Maduro responded by cutting ties with the US.

During a lengthy speech at a special session at the Supreme Court on Friday, Maduro censured US President Donald Trump for seeking to orchestrate a coup against his government and backing the self-declared leader.

Pro- and anti-government rallies were also held in the capital Caracas.

Some other members of the Security Council, including South Africa, Equatorial Guinea and China, also took a jab at the US for interfering in the internal affairs of an independent country.

They blocked a US push for a UN Security Council statement and expressed their full support for Venezuela’s National Assembly as the country’s “only democratically elected institution.”

US Secretary of State Mike Pompeo, however, renewed Washington’s opposition to Maduro’s rule, describing it as the former government of the Latin American country.

Addressing the Security Council’s Saturday session, Pompeo called on UN countries to “pick a side” on Venezuela.

He recognized Guaido as head of state and urged Maduro to step down.

“Now it is time for every other nation to pick a side. No more delays, no more games. Either you stand with the forces of freedom, or you’re in league with Maduro and his mayhem,” Pompeo told the council.

He called on all members of the Security Council to support what he called “Venezuela’s democratic transition” and “Guaido’s role” in it.

He added that Washington would help “recover a brighter future for Venezuela” and urged nations to support the “democratic aspirations” of Venezuelan people.

The US has a long record for “regime change” campaigns in Venezuela and other countries. In 2002, the late Venezuelan president, Hugo Chavez, was ousted for two days in a US-backed coup that was ultimately defeated.

Maduro was sworn in for a second term on January 10, after a vote marred by an opposition boycott and claims of vote-rigging.

Oil-rich Venezuela is currently mired in economic turmoil, with people grappling with hyperinflation, power cuts and shortages of basic items.