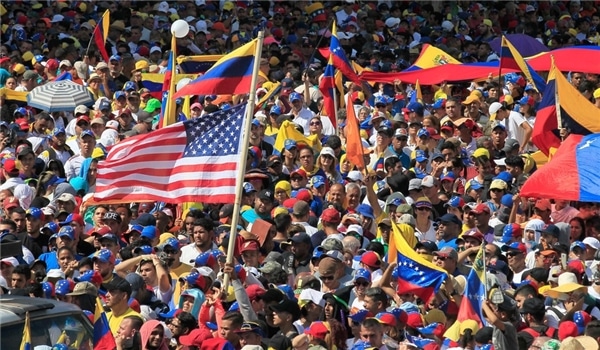 Caracas is well aware the US is actually leading an effort to topple President Nicolas Maduro, but is ready to sit down with the Western-backed opposition and could be doing so “in half an hour”, the Venezuela’s foreign minister stated.

Hitting back at the Western pressure, Venezuelan government will now focus its efforts on “the main leader of the coup, the ‘director of the circus’, namely, the US government, Mr [Donald] Trump and his representatives”.

Foreign Minister Jorge Arreaza revealed in an exclusive interview with RT. Without further ado, he accused Washington of spearheading what he said an effort to overthrow democratically elected President Nicolas Maduro.

“The US government is not just behind the coup but is leading it. We are focused on neutralizing Washington’s attacks,” he added.

Adding to a US-led pressure for Maduro to step aside, Spain, France, Germany and the UK on Saturday issued the elected leader an ultimatum, calling on Maduro to call for new elections within eight days.

“First of all, it is interventionism to the highest degree. Secondly, it is arrogant, and, thirdly, it is artificial,” Arreaza commented.

The Venezuelan government will scrutinize ties with countries who backed the opposition but will not put too much emphasis on it.

“The Bolivarian democracy only requires recognition and support from Venezuelan people,” he stated, adding, “other governments are of little interest to us.”

Nevertheless, Caracas will keep the door open to any talks with pro-Western opposition led by Juan Guaido. The opposition leader declared himself interim president last week, garnering support or recognition from the US and an array of other nations. Russia and Turkey were among those to denounce Guaidos’s move and said they would further on recognize the elected leader Maduro.

“Everyone should know that we are in constant contact with the Venezuelan opposition,” the Venezuela’s top diplomat stressed.

Last December, the government was close to reaching a deal with them but they walked out of the talks after consulting with the State Department. At any rate, Caracas stays ready to engage its opponents.

“If the opposition is ready to sit down with us at the negotiating table we will agree literally in half an hour,” he noted.

Seizing the opportunity, the foreign minister urged Guaido followers “to come to the negotiations, ask permission from their superiors in the US, and look for a solution with us [to] jointly build a political road for the future”.

It is impossible to push for change in Venezuela by actually attacking it or siding with its enemies, Arreaza stated.

Caracas is currently engaged with the governments of Mexico and Uruguay on “daily” basis after both states offered their mediation services. The government also remains in constant talks with the American-led domestic opposition, which continues to avoid any meaningful dialogue unless approved by the US.