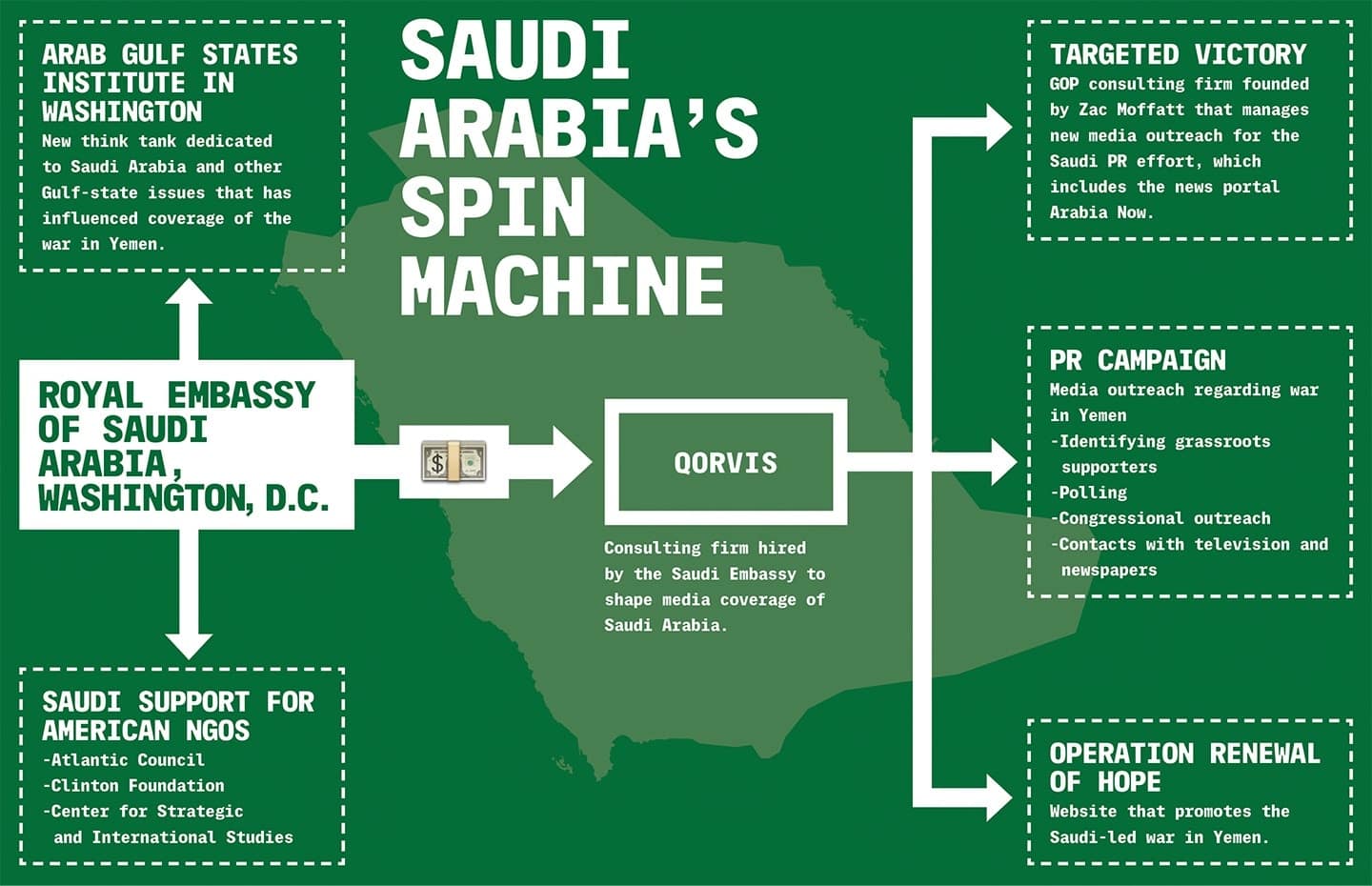 Russia Today: NewsGuard and its shady advisory board – consisting of truth-lovers such as Tom Ridge, the first-ever homeland security chief, and former CIA director Michael Hayden – came under scrutiny after Microsoft announced that the app would be built into its mobile browsers. A closer examination of the company’s publicly listed investors, however, has revealed new reasons to be suspicious of this self-declared crusader against propaganda. As Breitbart discovered, NewsGuard’s third-largest investor, Publicis Groupe, owns a PR firm that has repeatedly airbrushed Saudi Arabia.

Following the September 11, 2001 terrorist attacks, Riyadh enlisted Qorvis Group, a Publicis subsidiary, in the hope of countering accusations that the kingdom turned a blind eye to – or even promoted – terrorism. Between March and September 2002, the Royal Embassy of Saudi Arabia reportedly paid Qorvis $14.7 million to run a PR blitz targeting American media consumers. As part of the campaign, Qorvis employed a litany of dubious tactics, including running pro-Saudi ads under the name of an activist group, Alliance for Peace and Justice. Tellingly, the FBI raided the company’s offices in 2004, after Qorvis was suspected of running afoul of foreign lobbying laws.

Between 2010 and 2015, Qorvis is believed to have received millions of dollars to continue to whitewash the kingdom’s image in the United States. The accelerated airbrushing came just as the Saudis launched its devastating war against Yemen. In fact, Qorvis created an entire website – operationrenewalofhope.com – to promote the Saudi-led war in Yemen, according to the Intercept.

The firm has also successfully planted Riyadh-friendly stories in major US publications, including a 2016 op-ed by Saudi Foreign Minister Adel al-Jubeir, which was published by Newsweek. The headline bravely bellowed: “The Saudis are fighting terrorism, don’t believe otherwise.”

All of this is rather extraordinary, considering that NewsGuard bills itself as an app that helps news consumers determine “if a website is trying to get it right or instead has a hidden agenda or knowingly publishes falsehoods or propaganda.”

Social media users quickly seized on the story, pointing out the multiple levels of irony and humor.

“I wondered why their slogan was ‘behead those who we say peddle fake news,'” one Twitter user joked.

Still, NewsGuard’s co-founder Steven Brill has insisted that Qorvis and its parent company have no control over the app.

“Publicis has nothing to do with the content or operations of NewsGuard and has a small stake in the company,” Brill told Breitbart.

If guiding the app is a responsibility reserved solely for the advisory board, NewsGuard likely won’t fare much better: One of its board members, Richard Stengel, is a former managing editor of Time magazine and an ex-State Department official who was dubbed the “chief propagandist” of the US government.

True to form, Stengel openly admitted during a panel discussion last year that “I’m not against propaganda,” and “Every country does it and they have to do it to their own population and I don’t necessarily think it’s that awful.”

Inside Saudi Arabia’s Campaign to Charm American Policymakers and Journalists

Soon after launching a brutal air and ground assault in Yemen, the Kingdom of Saudi Arabia began devoting significant resources to a sophisticated public relations blitz in Washington, D.C.

The PR campaign is designed to maintain close ties with the U.S. even as the Saudi-led military incursion into the poorest Arab nation in the Middle East has killed nearly 6,000 people, almost half of them civilians.

Elements of the charm offensive include the launch of a pro-Saudi Arabia media portal operated by high-profile Republican campaign consultants; a special English-language website devoted to putting a positive spin on the latest developments in the Yemen war; glitzy dinners with American political and business elites; and a non-stop push to sway reporters and policymakers.

That has been accompanied by a spending spree on American lobbyists with ties to the Washington establishment. The Saudi Arabian Embassy, as we’ve reported, now retains the brother of Hillary Clinton’s campaign chairman, the leader of one of the largest Republican Super PACs in the country, and a law firm with deep ties to the Obama administration. One of Jeb Bush’s top fundraisers, Ignacio Sanchez, is also lobbying for the Saudi Kingdom.