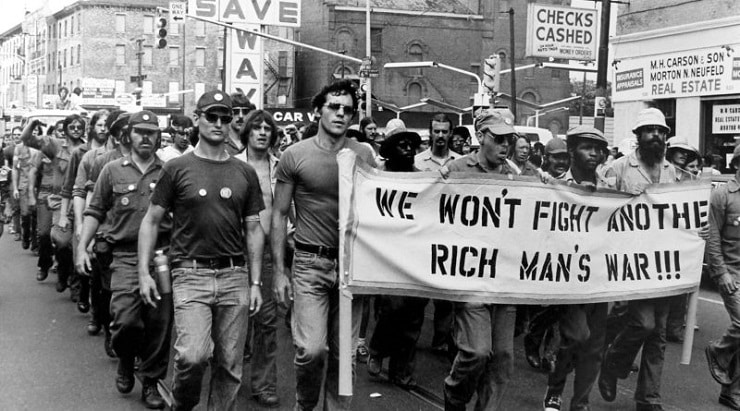 Last summer I spent a lazy week or so in Barbados with my good friend, Gene.  Gene, of course, is Colonel Eugene Khrushchev, a former Soviet airborne forces commander who served in Afghanistan.

We share more than friendship, we share a hatred of war, a hatred learned on the battlefield.  You see, half a century ago I was serving in Vietnam as a combat infantryman as part of a Marine BLT (Battalion Landing Team).

The Vietnam War was insanity at its purest, a monstrosity of global terrorism and those who fought in that war, more than any other American veterans, stood against war and brought an endless conflict to an end.  I was part of that effort, an effort that, to an extent, defined the rest of my life.

I write this as I feel as though I were hit by a garbage truck, watching events unfold in Washington.  Now it is the drama between another former Marine Vietnam combat veteran, Robert Mueller, and Roger Stone and Donald Trump.

Trump, of course, avoided military service through a fake diagnosis from a foot doctor named Larry Baunsteen who rented from Trump’s dad, Fred.  Trump dodged military service and now demands war, today on Venezuela, and that’s only because the Pentagon refuses to attack Iran, fearful of being humiliated.  America needs small targets as America is ruled by “small men.”

As a journalist, I look at the life of Roger Stone, a 40-year Trump associate, the two of them brought together by one of history’s most sinister figures, Roy Cohn.  Cohn, famous for railroading the Rosenbergs into the electric chair and hunting imaginary Communists, was a figure to be reckoned with in New York, mob lawyer and “socialite” of New York’s pre-AIDS gay club scene, always with an attractive young man on his arm.

This is how Roger Stone and Donald Trump met, on Roy Cohn’s “arm.”

Both are “small men,” not alone in that designation.  Stone began his career as a “step and fetch ‘it” for arch-villain Richard Nixon, and later as “fund raiser,” read “bag-man” for “acting president” Ronald Reagan.

Stone was and is a “small man,” the smallest,” yet he roams the corridors of power, inhabited by much of the same, small men, cowards, cheats, petty thieves, bureaucrats at best, too often petty thugs and “mama’s boys.”  That’s who America has elevated to fame and power, too often anointed to rule by the Deep State for their “moral flexibility.”  You see, there are things even a rat won’t do.

What I assert is this, there is no other choice for someone who has experienced combat, seen friends and enemies die, witnessed suffering and misery and, above all, the utter corruption of war and those who espouse it.

I spent 25 years as a “service officer,” helping Vietnam veterans receive medical care and disability compensation, too often watching clients die as their paperwork crept through Byzantine processing, sometimes taking decades.  For instance, VT editor Colonel Jim Hanke’s combat disability claim just went through recently.  He is 79 and his claim has been in processing for 27 years.

My own took 12 years.  The saying “Deny, Deny Deny until They Die” is the watchword of the small men responsible for murdering the generation that was foolish enough to serve in our first “endless war.”  Total American dead from Vietnam, if you count lives shortened to an average of 46 years as “service connected” is around 1.8 million, more than double all other American wars combined.

You will never see those figures, though they are totally accurate, they are also “classified” and will remain so for another half century.

Decades ago veterans termed politicians who hate service and personal risk but love war as “Chickenhawks.”  Some served in the military, somewhat, worming their way into National Guard or Reserve units during the Vietnam War, when those organizations were, by act of Congress, prohibited from deployment to Vietnam.

George W Bush became a pilot in such an organization and, according to many sources, simply tired of even the minor inconvenience of National Guard meetings and eventually went AWOL (absent without leave).

Similar tales are repeated for literally hundreds of war mongers, Rush Limbaugh who dodged service because of a “skin condition” is one.  The vast majority of pro-war politicians who dodged military service are Republicans.

Key to avoiding rule by “small men” is for veterans from every nation to band together, to rise above the propaganda and fakery.  You see, it didn’t take long for someone actually serving in Vietnam to begin to see the Viet Cong and North Vietnamese Army as heroes.

These were men and women who withstood carpet bombing, who lived off nothing and fought American to a military standstill.  The stories I could tell but won’t, I really can’t.  How should one feel after killing an “enemy” who is half starved, carrying a rusted and broken AK47, someone defending their nation against a foreign invader.

The parallel with the Taliban isn’t hard to note.  One of our VT editors is Mohmand Kadir, a former Mujahedeen commander in Afghanistan.  Kadir lives nearby and our families get together often.

Kadir regularly reminds me of the reality of “on the ground” in Afghanistan.

Not all leaders are “small men.”  I remember spending an evening with now Prime Minister of Pakistan, Imran Khan.  With me was VT’s Pakistan Bureau Chief Raja Mujtaba.  Raja died several years ago, greatly missed.  Major Raja Mujtaba served as a tank commander in the Indo-Pakistani war of 1971.

He faced court martial and execution for refusing to murder Indian prisoners of war when ordered.  Raja was not a “small man,” and though forgotten by many, he is remembered and missed.

One of the diseases of our current wars is the attempt to keep American military serving in the Middle East as far as possible from interacting with the local population.  America throws up bases, little castles as it were, across Syria, Iraq, Afghanistan and peppered across Africa’s Sahel.

With aerostats overhead and radar/infrared controlled automatic machineguns defending them, forces sally forth in armored vehicles to visit “the natives,” while jets and armored helicopters zoom back and forth overhead.

Yet still, some stop and look, talk and listen as well.  Those who do so meet their brothers and sisters, sometimes Kurdish “allies” and too often misguided ISIS recruits that America seems to love so much, but others as well.

Ah, but I think back to Roger Stone and photos from his White House years with Nixon.  “Wormlike” would be a description I might suggest.

I think of VT editor Bill Eckard who served with me in Vietnam.  Bill died some years ago, his life shortened by what we now call an “IED” explosion that took his legs so long ago, February 1970 as I remember too well.  When not fighting government corruption, Eckard served as head of the Department of Veterans Affairs prosthetic division.

I remember Bill arriving with our unit in Vietnam, a corporal with Marine Force Recon.  After a few weeks, some harsh words, a few fist fights and some shared experiences, he was transformed from special operations professional to someone awake and aware of the insanity that engulfed us all.

Uncensored history is full of military mutinies, of arms being laid down, of soldiers saying, “enough is enough.”  Though erased from the history book, such things are real, Canada in World War II, American units as well and widespread “stand downs” in Vietnam.

You see, a real soldier recognizes his brothers when he sees them, be they Syrian Arab Army or Hezbollah, or those “hated” Shiite militias that threw ISIS out of Iraq.

It is unfair to blame those who serve for failing to know what is kept from them or for taking orders.  Propaganda and very real mind control are so much more of a science thanks to Google, Facebook and the “fake news.”

Thank our universities and military service academies as well and, above all, thank the “small men” who lead from behind as they always have.

However, there is no excuse for not recognizing the small men that we serve, and certainly no reason to exalt those we should revile.  What makes people submit to tyranny or, worse still, embrace it?

The excuse most often relied upon is hopelessness, that the fake reality pours down on all of us, smearing the heroic, “laundering” those whose stench should be overwhelming, turning us on each other, fake enemies, fear, envy and hate unleashed at every turn.

Roger Stone’s entire life has been fakery and deceit.  There are so many “Roger Stone’s,” there is no shortage it seems of “small men.”

What does it say of those who obey?