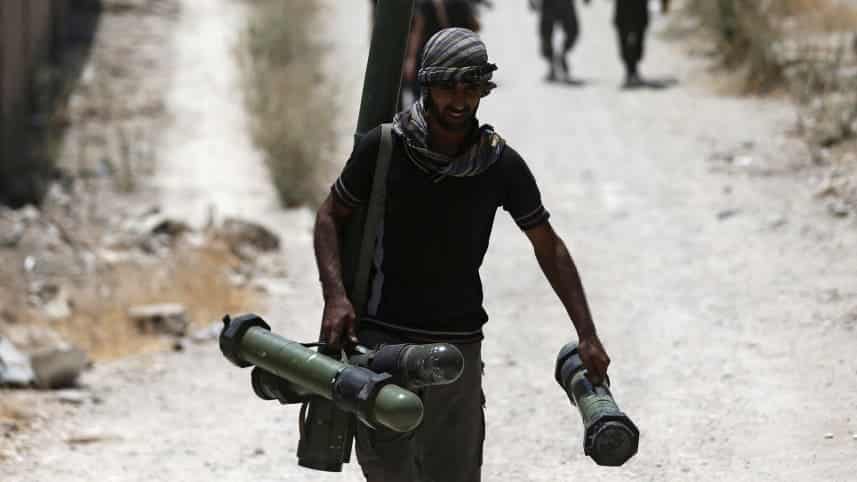 In his final days as the Israel Defense Forces’ Chief of Staff, Lieutenant General Gadi Eisenkot confirmed, on the record, that Israel had directly supported anti-Assad Syrian rebel factions in the Golan Heights by arming them.

This revelation marks a direct break from Israel’s previous media policy on such matters. Until now, Israel has insisted it has only provided humanitarian aid to civilians (through field hospitals on the Golan Heights and in permanent healthcare facilities in northern Israel), and has consistently denied or refused to comment on any other assistance.

In short, none other than Israel’s most (until recently) senior serving soldier has admitted that up until his statement, his country’s officially stated position on the Syrian civil war was built on the lie of non-intervention.

As uncomfortable as this may initially seem, though, it is unsurprising. Israel has a long history of conducting unconventional warfare. That form of combat is defined by the U.S. government’s National Defense Authorization Act for Fiscal Year 2016 as “activities conducted to enable a resistance movement or insurgency to coerce, disrupt or overthrow an occupying power or government by operating through or with an underground, auxiliary or guerrilla force in a denied area” in the pursuit of various security-related strategic objectives.

While the United States and Iran are both practitioners of unconventional warfare par excellence, they primarily tend to do so with obvious and longer-term strategic allies, i.e. the anti-Taliban Northern Alliance fighters in Afghanistan, and various Shia militias in post-2003 Iraq.

In contrast, Israel has always shown a remarkable willingness to form short-term tactical partnerships with forces and entities explicitly hostile to its very existence, as long as that alliance is able to offer some kind of security-related benefits.

The best example of this is Israel’s decision to arm Tehran during the Iran-Iraq War, despite the Islamic Republic of Iran’s strong anti-Zionist rhetoric and foreign policy. During the 1980s, Iraq remained Jerusalem’s primary conventional (and arguably existential) military threat. Aiding Tehran to continue fighting an attritional war against Baghdad reduced the risk the latter posed against Israel.

Similarly, throughout the civil war in Yemen in the 1960s, Israel covertly supported the royalist Houthi forces fighting Egyptian-backed republicans. Given Egypt’s very heavy military footprint in Yemen at the time (as many as a third of all Egyptian troops were deployed to the country during this period), Israelis reasoned that this military attrition would undermine their fighting capacity closer to home, which was arguably proven by Egypt’s lacklustre performance in the Six Day War.

Although technically not unconventional warfare, Israel long and openly backed the South Lebanon Army, giving it years of experience in arming, training, and mentoring a partner indigenous force.

More recently, though, Israel’s policy of supporting certain anti-Assad rebel groups remains consistent with past precedents of with whom and why it engages in unconventional warfare. Israel’s most pressing strategic concern and potential threat in Syria is an Iranian encroachment onto its northern border, either directly, or through an experienced and dangerous proxy such as Hezbollah, key to the Assad regime’s survival.

For a number of reasons, Israel committing troops to overt large-scale operations in Syria to prevent this is simply unfeasible. To this end, identifying and subsequently supporting a local partner capable of helping Israel achieve this strategic goal is far more sensible, and realistic.

Open source details of Israel’s project to support anti-Assad rebel groups are sparse, and have been since the outbreak of the Syrian civil war.

Reports of this first arose towards the end of 2014, and one described how United Nations officials had witnessed Syrian rebels transferring injured patients to Israel, as well as “IDF soldiers on the Israeli side handing over two boxes to armed Syrian opposition members on the Syrian side.” The same report also stated that UN observers said they saw “two IDF soldiers on the eastern side of the border fence opening the gate and letting two people enter Israel.”

Since then, a steady stream of similar reports continued to detail Israeli contacts with the Syrian rebels, with the best being written and researched by Elizabeth Tsurkov. In February, 2014 she wrote an outstanding feature for War On The Rocks, where she identified Liwaa’ Fursan al-Jolan and Firqat Ahrar Nawa as two groups benefiting from Israeli support, named Iyad Moro as “Israel’s contact person in Beit Jann,” and stated that weaponry, munitions, and cash were Israel’s main form of military aid.

She also describes how Israel has supported its allied groups in fighting local affiliates of Islamic State with drone strikes and high-precision missile attacks, strongly suggesting, in my view, the presence of embedded Israeli liaison officers of some kind.

A 2017 report published by the United Nations describes how IDF personnel were observed passing supplies over the Syrian border to unidentified armed individuals approaching them with convoys of mules, and although Israel claims that these engagements were humanitarian in nature, this fails to explain the presence of weaponry amongst the unidentified individuals receiving supplies from them.

Writing for Foreign Policy in September 2018, Tsurkov again detailed how Israel was supporting the Syrian rebel factions, stating that material support came in the form of “assault rifles, machine guns, mortar launchers and transport vehicles,” which were delivered “through three gates connecting the Israeli-occupied Golan Heights to Syria – the same crossings Israel used to deliver humanitarian aid to residents of southern Syria suffering from years of civil war.” She also dates this support to have begun way back in 2013.

The one part of Israel’s involvement in the Syrian Civil War which has been enthusiastically publicised, though, has been its ongoing humanitarian operations in the Golan. Dubbed “Operation Good Neighbor,” this was established in June 2016, and its stated aim is to “provide humanitarian aid to as many people as possible while maintaining Israel’s policy of non-involvement in the conflict.”

Quite clearly, this is – at least in parts – a lie, as even since before its official commencement, Israel was seemingly engaging with and supporting various anti-Assad factions.

Although Operation Good Neighbor patently did undertake significant humanitarian efforts in southern Syria for desperate Syrian civilians (including providing free medical treatment, infrastructure support, and civilian aid such as food and fuel), it has long been my personal belief that it was primarily a smokescreen for Israel’s covert unconventional warfare efforts in the country.

Although it may be argued that deniability was initially necessary to protect Israel’s Syrian beneficiaries who could not be seen to be working with Jerusalem for any number of reasons (such as the likely detrimental impact this would have on their local reputation if not lives), this does not justify Israel’s outright lying on the subject. Instead, it could have mimicked the altogether more sensible approach of the British government towards United Kingdom Special Forces, which is simply to restate their position of not commenting, confirming, or denying any potentially relevant information or assertions.

Israel is generous in its provision of humanitarian aid to the less fortunate, but I find it impossible to believe that its efforts in Syria were primarily guided by altruism when a strategic objective as important as preventing Iran and its proxies gaining a toehold on its northern border was at stake.

Its timing is interesting and telling as well. Operation Good Neighbor was formally put in place just months after the Assad regime began its Russian-backed counter-offensive against the rebel factions, and ceased when the rebels were pushed out of southern Syria in September 2018.

>>Why Assad’s Western Apologists Think the White Helmets Should Choose Death Rather Than Rescue via Israel >> One Day, We Israelis Will Revisit the Time Our Syrian Neighbors Were Being Slaughtered – and Ask Why We Did Nothing

But it’s not as if that September there were no longer civilians who could benefit from Israeli humanitarian aid, but an absence of partners to whom Israel could feasibly directly dispatch arms and other supplies. Although Israel did participate in the rescue of a number of White Helmets, this was done in a relatively passive manner (allowing their convoy to drive to Jordan through Israeli territory), and also artfully avoided escalating any kind of conflict with the Assad’s forces and associated foreign allies.

Popular opinion – both in Israel and amongst Diaspora Jews – was loud and clear about the ethical necessity of protecting Syrian civilians (especially from historically-resonant gas attacks). But it’s unlikely this pressure swung Israel to intervene in Syria. Israel already had a strong interest in keeping Iran and its proxies out southern Syria, and that would have remained the case, irrespective of gas attacks against civilians.

Although Israel has gone to great lengths to conceal its efforts at unconventional warfare within the Syrian civil war, it need not have. Its activities are consistent with its previous efforts at promoting strategic objectives through sometimes unlikely, if not counter-intuitive, regional partners.

Perhaps the reason why Eisenkot admitted that this support was taking place was because he knew that it could not be concealed forever, not least since the fall of the smokescreen provided by Operation Good Neighbor. But the manner in which Israel operated may have longer-term consequences.

Israel is unlikely to change how it operates in the future, but may very well find future potential tactical partners less than willing to cooperate with it. In both southern Lebanon and now Syria, Israel’s former partners have found themselves exposed to dangers borne out of collaboration, and seemingly abandoned.

With that kind of history and record, it is likely that unless they find themselves in desperate straits, future potential partners will think twice before accepting support from, and working with, Israel.

For years, Israel has religiously adhered to the official party line that the country’s policy was non-intervention, and this has now been exposed as a lie. Such a loss of public credibility may significantly inhibit its abilities to conduct influence operations in the future.