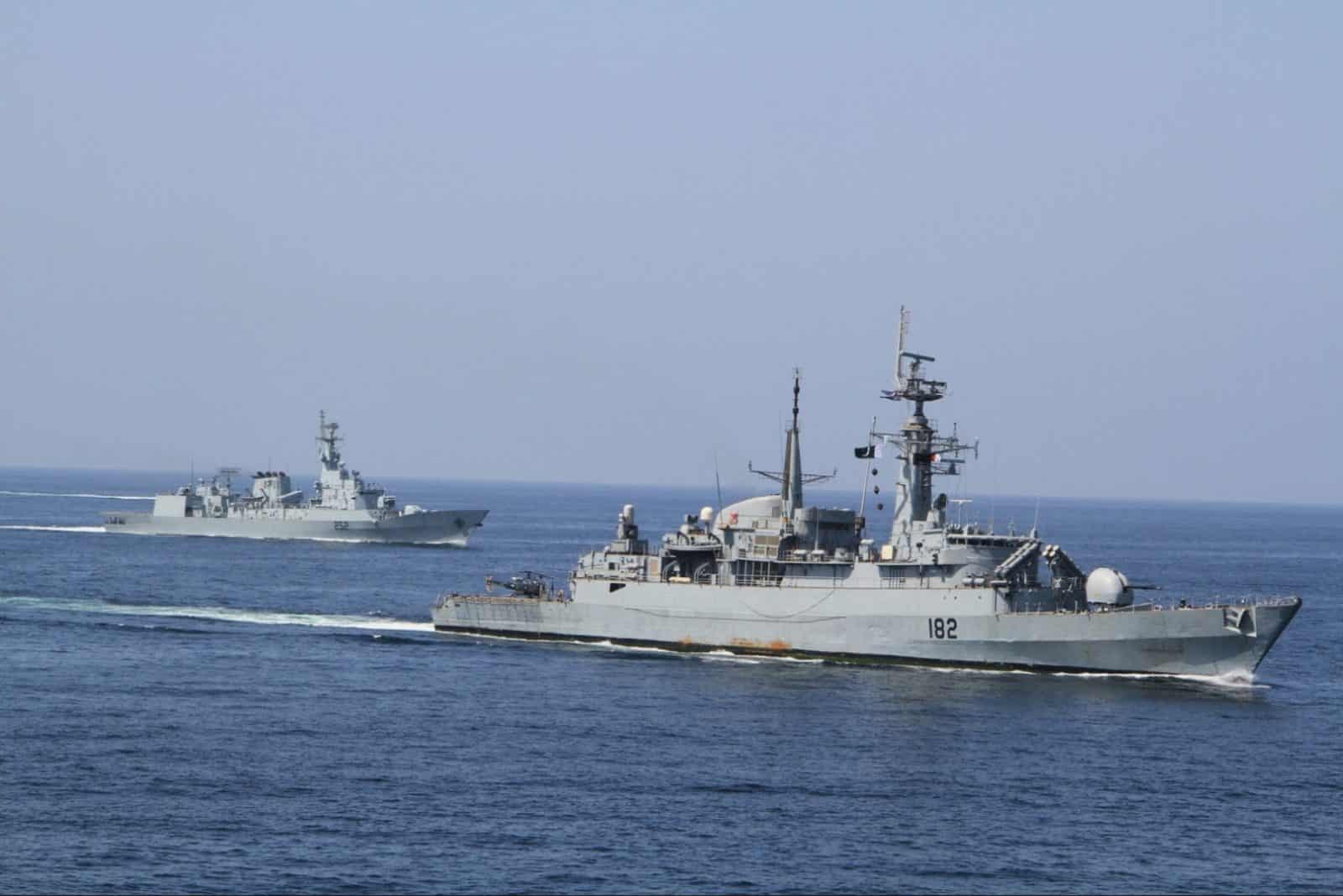 Darius Shahtahmasebi is a New Zealand-based legal and political analyst, currently specializing in immigration, refugee and humanitarian law.
Russia Today: Pakistan is making important strides in its military and naval capacities with the help of China, relying less on US-made weaponry. Despite accepting money from all sides, Pakistan’s relationship with China continues to be strong.

After the Trump administration decided to suspend $3 billion in security assistance to Pakistan, complaining that Islamabad fails to do enough to combat terrorism, Washington has risked pushing Pakistan into the open arms of a number of other notable nations.

China has been a key ally for Pakistan in recent times and is almost certainly the reason why the US has taken a sharp turn in its approach to dealing with the country. (Considering that the Bush administration was caught red-handed funding Pakistani terrorist groups, Washington’s recent disdain for Islamabad makes little sense in the context of wider US imperialism).

Now, China is assisting Pakistan’s Navy to expand rapidly, with the completion and delivery of four advanced warships currently under construction in Shanghai. According to the Diplomat, Pakistan’s Chinese-made naval vessels will arrive through a bilateral arms agreement by 2021. Worth over $348 million, these frigates have the capacity to act as anti-ship and anti-submarine operations, as well as for air defense.

ALSO ON RT.COMResponse to US global bullying: Iran, India ditch dollar to continue trading oil despite sanctionsReports seem to indicate that these ships are to be stationed for defense and security in and around the Gwadar port. This is the same port that many media outlets accused China of attempting to hijack and transform into its own naval base. Perhaps the media sounding the alarm over these reports have helped convince China to try a subtler strategy of creating a naval presence around this strategic area, but either way, the move to acquire Chinese naval ships is sure to irk the United States irrespective of the end result, as some experts are predicting that this will lead to regular Sino-Pakistani patrols across the region.

That being said, this is also the same port in which Saudi Arabia is planning to establish a $10 billion oil refinery, according to the Saudi Energy Ministry, setting Saudi Arabia up as a key partner in the China-Pakistan Economic Corridor (CPEC).

Unfortunately for Washington, Pakistani purchases of US-made military equipment have begun to fall. Data from the Stockholm International Peace Research Institute appears to show that US weapons exports to Pakistan dropped from $21 million in 2017, from a whopping $1 billion just seven years prior. Altogether, since the September 11 attacks, the US has provided over $22 billion in overt security aid to Pakistan and another $10 billion in economic aid, according to a July 2018 report conducted by consultant firm Avascent.

However, despite these initial findings, this same report found that Pakistan was increasingly turning to Beijing for its defense equipment and leaving Washington out in the sand. In total, Pakistan has signed billions of dollars’ worth of contracts for fighter aircraft, submarines and warships from China. The report estimated that over the next decade, Beijing will become the single most important arms supplier for the Pakistani military, but maintains options to obtain arms from Turkey and Russia as well. Turkey, for its part, will upgrade two of Pakistan’s Agosta 90B-class submarines, will provide four MILGEM corvettes to the Pakistani Navy, and already provided a navy fleet tanker in 2016.

Pakistan is also reportedly the largest importer of the F-7PG aircraft from China, with more than 50 F-7PG fighters in the Pakistan Air Force (one of these planes just recently crashed in Western Pakistan, killing the pilot).

In actuality, China and Pakistan are developing their relationship in more ways than at first meets the eye. It is one thing to spend millions of dollars attempting to beef up a nation’s navy, but it is something else entirely when two nations become attached on a much deeper level, particularly when it involves the citizens of those countries. Just this week, the government of Pakistan announced a new visa regimebetween Pakistan and China, tourism being an area of Pakistan’s economy that China has already been contributing heavily. Reportedly, millions of young Pakistanis are also foregoing English and learning Mandarin instead in order to obtain jobs and degrees. If we fast-forward a few decades down the line, I venture to bet that Western influence in Pakistan will be almost completely invisible.

Pakistani President Arif Alvi also just hailed the China-Pakistan Economic Corridor (CPEC), vowing that the scheme will bring economic prosperity to the two countries. The CPEC is essentially a combination of infrastructure projects in Pakistan funded by Chinese loans which are worth at least $62 billion. As explained above, Saudi Arabia is not sitting idly by watching this project develop (not surprising, when one understands why).

READ MORE: Engine of growth: Trade turnover across China’s ‘One Belt, One Road’ exceeds $5 trillion since 2013

CPEC, combined with China’s New Silk Road Project, has top US lawmakers and intelligence personnel increasingly “concerned.” One senator stated that he was “concerned about data access China may control through digital infrastructure projects in countries around the world. What is the IC’s assessment of potential dual-use aspects of China’s Belt and Road Initiative and what threats do they pose to US interests?”

US allies and partners “seeking greater independence from Washington”

A report compiled by Daniel R. Coats, the director of national intelligence, entitled “Worldwide threat assessment of the US intelligence community” identifies Pakistan as a nation that contributes to the risks of escalation dynamics and security in the region. More noticeable, however, is that while Pakistan appears in the document a handful of times, China is mentioned at least 85 times right throughout the report.

“We assess that China’s leaders will try to extend the country’s global economic, political, and military reach while using China’s military capabilities and overseas infrastructure and energy investments under the Belt and Road Initiative to diminish US influence,” the report states. “China has built its first overseas military facility in Djibouti and probably is exploring bases, support facilities, or access agreements in Africa, Europe, Oceania, Southeast Asia, and South Asia.”

Most curious is the foreword of the report which, after outlining all the threats Russia and China pose to the United States in all the different ways, states that “[a]t the same time, some US allies and partners are seeking greater independence from Washington in response to perceptions of changing US policies on security and trade and are becoming more open to new bilateral and multilateral partnerships.”

US ‘do more’ mantra no longer works with us, Pakistani minister tells RT

Let’s do the math. As already stated, the US has deprived Pakistan of $3 billion in security assistance. Not too long ago, the Abu Dhabi Fund for Development (ADFD) UAE deposited $3 billion into the State Bank of Pakistan to support its economic growth. Saudi Arabia made a similar promise, agreeing to provide Islamabad with a one-year deferred payment facility for importation of oil worth up to $3 billion.

At around the same time, Emirati media announced that the UAE and Pakistan were accelerating defense cooperation after the federal minister for defense production in Pakistan, Zubaida Jalal, received Major General Staff Pilot Ishaq Saleh Al-Balushi, head of the executive directorate of industries and development of defense capabilities at the UAE Ministry of Defense in Islamabad.

Pakistan is also expected to sign a memorandum of understanding with Saudi Arabia on a framework for $10 billion in Saudi investments. While some media will present Pakistan’s willingness to work with Saudi Arabia as an issue which will rattle and unnerve China, the available evidence appears to show that Sino-Pakistan relations are continuing unabated.

The question of Pakistan’s nukes

Last Thursday, the Pakistani Army Strategic Forces Command conducted a successful test flight of the Nasr close-range ballistic missile, which is nuclear-capable and can reach a specification of 70km.

The target of the ballistic test may surprise you. According to the Pakistani Army statement, the Nasr “augmented Full Spectrum Deterrence posture remaining within the precincts of policy of Credible Minimum Deterrence, against prevailing and evolving threat spectrum more effectively including enemy’s ballistic missile defense and other Air Defence Systems.”

The “enemy” referred to in this statement appears to be a blatant reference to Trump’s recent 2019 Missile Defense Review, which admitted that the US had “discussed potential missile defense cooperation with India” in light of the fact that “a number of states in South Asia are developing an advanced and diverse range of ballistic and cruise missile capabilities.”

Currently, Pakistan has ballistic missiles with ranges that can hit anywhere inside India. It has also built nuclear-tipped cruise missiles that can travel up to 400 miles. Not surprisingly, it was the US that gave the green light to Pakistan to modify its F-16 fighters to be capable of dropping nuclear weapons.

Pakistan’s economic woes put the nation in an incredibly compromising position. Knowing that it can no longer rely on Washington for support, it has to turn to as many partners as it can to keep its economy afloat. While China may not be thrilled by Saudi Arabia’s attempt to wade in on its project at the Gwadar port, it does appear that Pakistan’s geopolitical significance, particularly in relation to China, will entail Beijing continuing to prioritize its relationship with Pakistan. This includes, if necessary, militarizing its available bases in the region through the supply of its Chinese-made naval vessels.