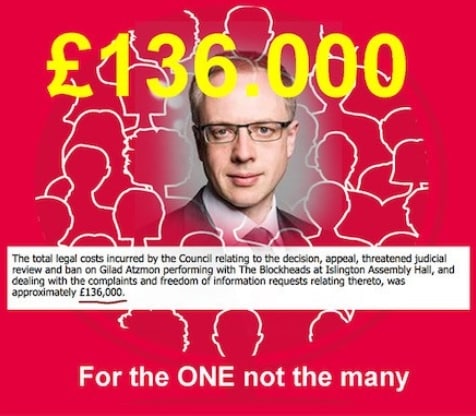 The corrupt Labour-run Islington Council has disclosed that it spent the staggering sum of £136,000 (one hundred and thirty-six thousand pounds, or $178,000) on legal fees in its efforts to stop me from playing the saxophone with the Blockheads at a Christmas concert.

Islington Labour Council claims to be impoverished and, as a result, it has evicted disabled people, it struggles with housing and can’t find the necessary cash to feed impoverished kids in school. Despite that, the council used £136,000 of the taxpayers’ money to try to interfere with the arts, freedom of expression and a Christmas musical celebration. If this story doesn’t become a huge scandal, it would mean that Britain is no longer a free country.

On 3 December, Islington Council received an emailfrom Likud Uk Director Martin Rankoff. Rankoff claimed to be so upset by my appearance at a council venue that he would be forced not to attend. Council Leader Richard Watts took immediate action. In anemail to Rankoff he vowed to prevent me from appearing with the Blockheads. On 4 December the council sent a letter to the Blockheads informing them that they had to remove me from the  concert or face a cancellation. The band was indignant that the council was interfering with their performance and published a very strong statement opposing the council’s demand. I hired a legal team to help me fight the council’s autocratic demand.

For its part, the bankrupt council hired Simkinslaw firm. Simkins, already one of Britain’s most expensive legal firms, deployed two partners for the task of stopping me playing the saxophone. Not surprisingly, one of these partners had represented US ultra Zionist tycoon Sheldon Adelson, a benefactor of both President Trump and Likud leader and Israeli Prime Minister Binyamin Netanyahu.

A few days before the concert, I publicised the matter, having decided that the public deserved to know how their council was spending its time and their money. And I was determined to expose the troubling collusion between the Labour Council and Likud UK.

A petition expressing disgust with the council was launched and quickly gathered almost 7,000 signatures, but the council refused to employ common sense. Thousands of complaints were filed with the council. But the Labour council preferred to listen to the Likud UK director. I was told that the council was spending tens of thousands of pounds on legal fees to justify its unlawful act. Some of my supporters filed Freedom of Information requests to find out how much Councillor Watts’s “decision” cost Islington’s residents.

I thought there had been an outlandish waste of £40,000-60,000. Today, through the Freedom of Information replies, we learned that the corrupt Labour politicians spent three times that amount. And in response to a request for an explanation of the council’s actions, the Labour councillors showed that they were not even brave enough to take responsibility for their own wasteful and absurd actions. Their claim was that the council’s employees had been the decision makers:

It seems unlikely that Martin Bevis and Ian Adams were the decision makers. If they were, the council should explain how it managed to spend a six-figure sum on lawyers.

The message to peace loving Britons is clear: despite our love for Jeremy Corbyn, the Labour Party in its current form is a cancerous, rotten collective. Not only is it unqualified to lead, its proximity to a government puts the future of Britain as a free society at grave risk.

My friend, Iranian American author Negar Azizmoradi, gives us this parable. A frog thrown into a pot of boiling water will immediately jump out but a frog placed in a pot of cold water that is slowly heated to a boil will not save itself. It will be cooked to death. Britons, like Americans, French and other Westerners, have been steamed for a while. Corbyn has been submerged in the heating water for the last three years. We are running out of the time to jump out. If we don’t put this madness to an end, we’re all going to end up as rotting corpses in a chicken soup.

But this story has a good ending. While Islington Council was quick to waste its residents’ tax money on lawyers, I managed to channel my art through Santa Claus, probably my best student ever: