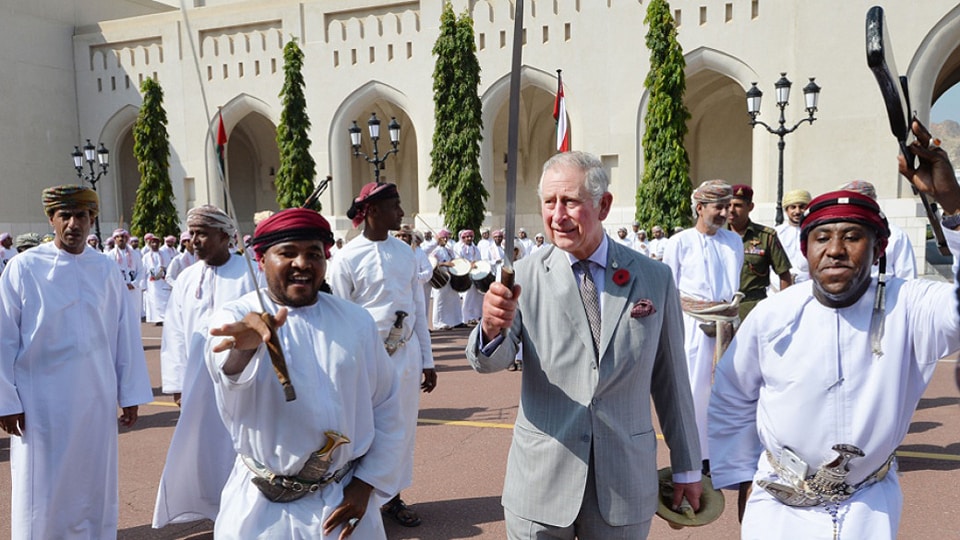 In his new book AngloArabia: Why Gulf Wealth Matters to Britain, Dr. David Wearing observes: “British power has been an important factor (among others) in the promotion and preservation of monarchical rule” in the Arabian Gulf. It is worth taking time to explore the British government’s wider relationship with the so-called “sleepy sultanate” in more detail.

Since signing an “assistance” treaty with Oman in 1798 — its first in the region — Britain has played the role of imperial overseer to the country. British historian Mark Curtis notes the “extremely repressive” regime of Sultan Said bin Taimur from 1932-70 “was in effect run by the British.”

Britons served as commanders of the armed forces, ministers for financial affairs, foreign affairs and petroleum affairs, as well as the director of intelligence, Curtis notes in his 2003 book Web of Deceit: Britain’s Real Role in the World.

However, with the country in the midst of civil war, by 1970 the Sultan had come to be seen as an unreliable and weak leader by the British, who helped to overthrow him in a palace coup.

For his troubles he was settled in the Dorchester Hotel back in London, where he died two years later. His own son, the modernizing Qaboos bin Said Al Said, was installed in his place, and 49 years later he still rules Oman, making him the longest-serving ruler in the Arab world.

As this longevity suggests, Oman is an absolute monarchy, in which “nearly all power remains with the monarch,” according to University of Exeter’s Dr. Marc Valeri, an expert on Oman.

Qaboos “concurrently holds the positions of prime minister, commander in chief of the armed forces, chairman of the central bank, and minister of defense, foreign affairs, and finance,” Valeri notes in a 2015 Carnegie Endowment for International Peace report.

Political parties are banned and press freedom is severely curtailed.

With Qaboos presenting Oman as an oasis of stability in a volatile region, one intellectual provided important context when interviewed by Valeri in 2012: “Omanis were not silent by choice … rather they were silenced by the regime. The Omani population was very quiet because of repression and fear: ‘Don’t talk about politics: you will be taken behind the sun’!”

As this quote intimates, the relationship between ruler and ruled has started to shift in recent years, with more Omanis publicly criticizing their government.

In 2010 an online petition was submitted to Qaboos pushing for “widespread reforms, such as a new constitution that would lead to a parliamentary monarchy,” Valeri writes.

Inspired by the Arab Spring protests rocking the rest of the Arab world, in early 2011 (largely peaceful) demonstrations occurred in several cities in Oman.

Though the protesters’ key demands centered on improved job opportunities, increased wages and an end to rampant corruption, there were also calls for political reform, including giving more power to the elected Consultative Council, increased independence for the judiciary and a free and open media.

Smaller in size than in many other Arab nations, the demonstrations in Oman nevertheless forced significant, though limited, concessions from the regime, such as an increase in the minimum wage, the creation of 50,000 jobs, the firing of several ministers and a small increase in the powers of the Consultative Council.

However, along with the carrot, Qaboos also made good use of the stick, with Valeri noting: “Several hundred protesters, journalists, and human rights activists were arrested all over the country.”

After 2011 the repression increased, Valeri noted in 2015. “Oman’s overly broad laws restrict the rights to freedom of expression, assembly and association,” Human Rights Watch summarizes on its website today.

“The authorities target peaceful activists, pro-reform bloggers, and government critics using short-term arrests and detentions and other forms of harassment.”

The British government, so keen to highlight human rights abuses carried out by governments in “enemy” states such as Libya and Syria, has, as far as I can tell, been completely silent about the protests and government crackdown in Oman.

How do I know? After a fruitless search of its website, I asked the Foreign Office and Commonwealth (FCO) press office to confirm whether the British government has made any public statements since 2010 about human rights in Oman.

It has been unable to point to any such statement, claiming there are too many statements to search through to know.

This silence is unsurprising, when one considers Britain’s deep geostrategic and economic interests in maintaining the status quo in Oman: along with Iran, Oman is situated beside “the world’s most important chokepoint for oil, the Strait of Hormuz, which is the conduit for about 40 per cent of the crude [oil] traded internationally,” Bloomberg recently reported.

Britain has recently announced the opening of two new military bases in Oman — the Duqm Port complex and a “joint training base,” the latter announced by Defense Secretary Gavin Williamson in November.

With the latter able to accommodate submarines and Britain’s new aircraft carriers, the bases are part of a broader military engagement with the Gulf, allowing Britain to more effectively project military power in the resource-rich region.

For example, during the 2001 U.S. and British-led invasion of Afghanistan, Oman “provided crucial logistics and base facilities for British forces,” Curtis explains.

We have the U.S. whistleblower Edward Snowden to thank for revealing another reason for Britain’s enduring interest in Oman — files he leaked in 2013 show Britain has a secret network of three spy bases in Oman which tap into the undersea fiberoptic cables passing through the Strait of Hormuz.

These intelligence facilities “intercept and process vast quantities of emails, telephone calls and web traffic,” information which is “then shared with the National Security Agency in the United States,” Curtis explained in a 2016 article for the Huffington Post.

There is concern amongst the Omani population about their government’s close relationship to Britain and the US.

Valeri refers to “online writers and protesters who openly criticized the ruler’s practices” such as “his proximity to British and US interests” being “quickly arrested and condemned to jail” after the 2011 protests.

Indeed, Britain is directly involved in the repression of domestic opposition in Oman.

“British police officers have trained members of Oman’s Special Forces, police and military in ‘public order’ tactics since 2014 as part of a controversial $1.2m security and justice project,” the Middle East Eye reported in 2017.

It turns out the Police Service of Northern Ireland has been instructing the Omani authorities in “how to deal with strikes and stifle protests under a Foreign Office-funded project.”

Having fled Oman in 2013 after being repeatedly arrested, Omani human rights campaigner Khalfan al-Badwawi told the Middle East Eye “Britain’s military relationship with Oman” is “a major obstacle to human rights campaigners in Oman because of the military and intelligence support from London that props up the Sultan’s dictatorship.”

Nabhan Alhanshi, who fled Oman in 2012 and is now the director of an organization looking at human rights in his home country, concurs.

“We in the Omani Centre for Human Rights believe that the British negligence of the human rights situations in Oman encourages the Omani government to commit more violations,” he told me.

With the mainstream media unwilling to report on this issue, the left in Britain has a key role to play in highlighting Britain’s forgotten friendship with the autocracy in Oman.

Like the anti-war movement did in Iraq and Afghanistan, progressives need to make concrete links of with pro-democracy activists and organizations in Oman and the rest of the Gulf monarchies.

With the British government’s support for Qaboos’s dictatorial rule as strong as ever, this population-to-population solidarity is one way Britons can help to build the more democratic, free and equal Oman that many Omanis have been working towards for so long.