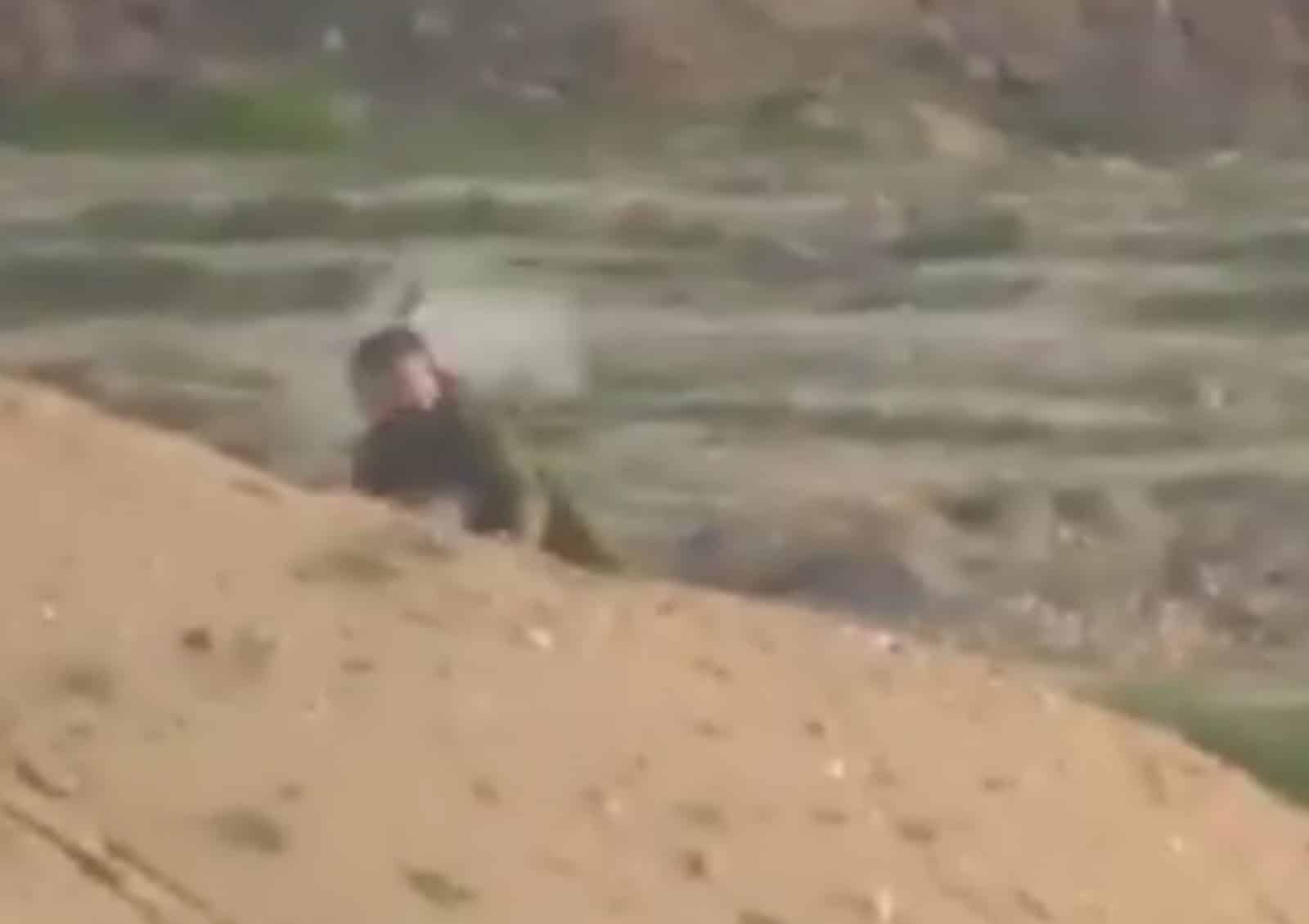 Times of Israel: A Hezbollah-affiliated Lebanese news outlet on Sunday broadcast previously unaired footage of the moment a Palestinian sniper in the Gaza Strip shot an Israeli officer in the helmet last month, causing him light injuries.

On January 22, a gunman from the Iran-backed Palestinian Islamic Jihad terror group fired at the Paratroopers Brigade company commander during a riot along the southern Gaza border. The bullet struck the officer’s helmet, which saved his life.

A Hezbollah-affiliated Lebanese news outlet on Sunday broadcast previously unaired footage of the moment a Palestinian sniper in the Gaza Strip shot an Israeli officer in the helmet last month, causing him light injuries.

On January 22, a gunman from the Iran-backed Palestinian Islamic Jihad terror group fired at the Paratroopers Brigade company commander during a riot along the southern Gaza border. The bullet struck the officer’s helmet, which saved his life.

In the video, aired by Al-Mayadeen, the officer can be seen firing his rifle from a berm across from the Gaza border. A moment later, a gunshot is heard, and the sniper’s bullet is seen striking the serviceman’s helmet, sending up a cloud of smoke and debris. He then grabs his head and takes cover.

Speaking to the pro-Hezbollah news outlet, a spokesperson for the Palestinian Islamic Jihad confirmed suspicions that the terror group’s military wing Saraya al-Quds was behind the attack.

Daoud Shehab told al-Mayadeen on Sunday that the terror group’s attack was “inevitable” after the officer shot at the rioters “because our blood is not cheap.”

He said the goal of the video is to uncover some of Israel’s daily violations of Palestinians “most basic human rights” and of “understandings” reached between Jerusalem and the Strip’s terror groups regarding a ceasefire agreement.

Shehab said there is “a consensus among the Palestinian factions in responding to any Israeli aggression.”

The injured officer was taken to Beerhsheba’s Soroka Medical Center for treatment. A cut on his head was bandaged, and he was released hours later, the hospital said. 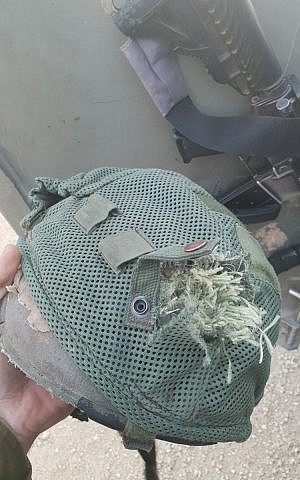 The helmet of an IDF officer that was hit by a sniper bullet during a riot along the Gaza border on January 22, 2019. (Courtesy)

The attack, which came amid already heightened tensions, threatened to push Israel to another war in Gaza. The Strip’s terrorist Hamas rulers later condemned the shooting and launched an investigation to determine who was behind it.

In response to the sniper attack, an Israel Defense Forces tank immediately destroyed an observation post belonging to Hamas in eastern Gaza, near the el-Bureij refugee camp. Hours later, the Israeli Air Force targeted an additional Hamas site in the coastal enclave.

According to Hamas, one of its fighters was killed in the initial tank strike on the terror group’s position and two other members were injured, one of them seriously.

On Sunday, Prime Minister Benjamin Netanyahu warned Hamas that it would launch a military campaign unless violence along the Gaza border ends, irrespective of the upcoming April 9 election.

“I want to clarify: If in Gaza the quiet isn’t preserved, we will know how to make decisions, even during an election, and won’t hesitate to act,” he said at the start of the weekly cabinet meeting.

A similar message was also sent to the Strip’s terror groups over the weekend via mediators, including Egypt, Channel 12 news reported Saturday night. 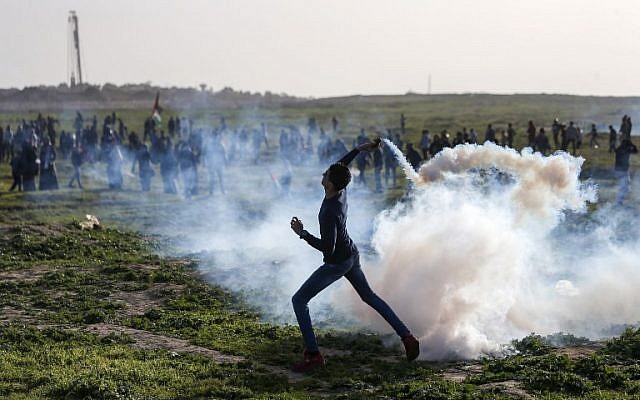 A Palestinian throws back a tear gas canister toward Israeli forces during clashes on the border with Israel, east of Gaza City, on January 25, 2019. (Mahmud Hams/AFP)

Earlier on Saturday, Egypt reportedly agreed to permanently reopen its border crossing with the Gaza Strip if Hamas restrains clashes with Israeli troops.

The Rafah crossing was closed in early January after the West Bank-based Palestinian Authority withdrew its employees there, then was reopened in both directions on Tuesday.

On Friday, Egypt’s offer was relayed to Hamas leader Ismail Haniyeh during a meeting in Gaza with Egyptian intelligence officials and UN’s Middle East envoy Nickolay Mladenov, according to Ynet news site. 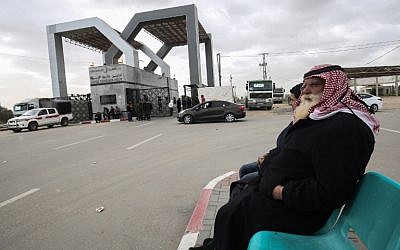 Palestinians sit waiting at the Rafah border crossing with Egypt, in the southern Gaza Strip, on January 8, 2019. (Said Khatib/AFP)

Quoting unnamed Palestinian sources, the report said that reopening the crossing on a permanent basis was intended as a concession to Hamas to curb violent protests along the border.

For the past several months, Egypt, the UN and Qatar have worked to preserve calm in Gaza and prevent flareups between Israel and terror groups in the Strip.

Since March, Palestinians have been holding regular protests on the border. Israel has accused Gaza’s Hamas rulers of using the demonstrations as a cover for attacks on troops and attempts to breach the security fence.

Israel has demanded an end to the violent demonstrations along the border in any ceasefire agreement.