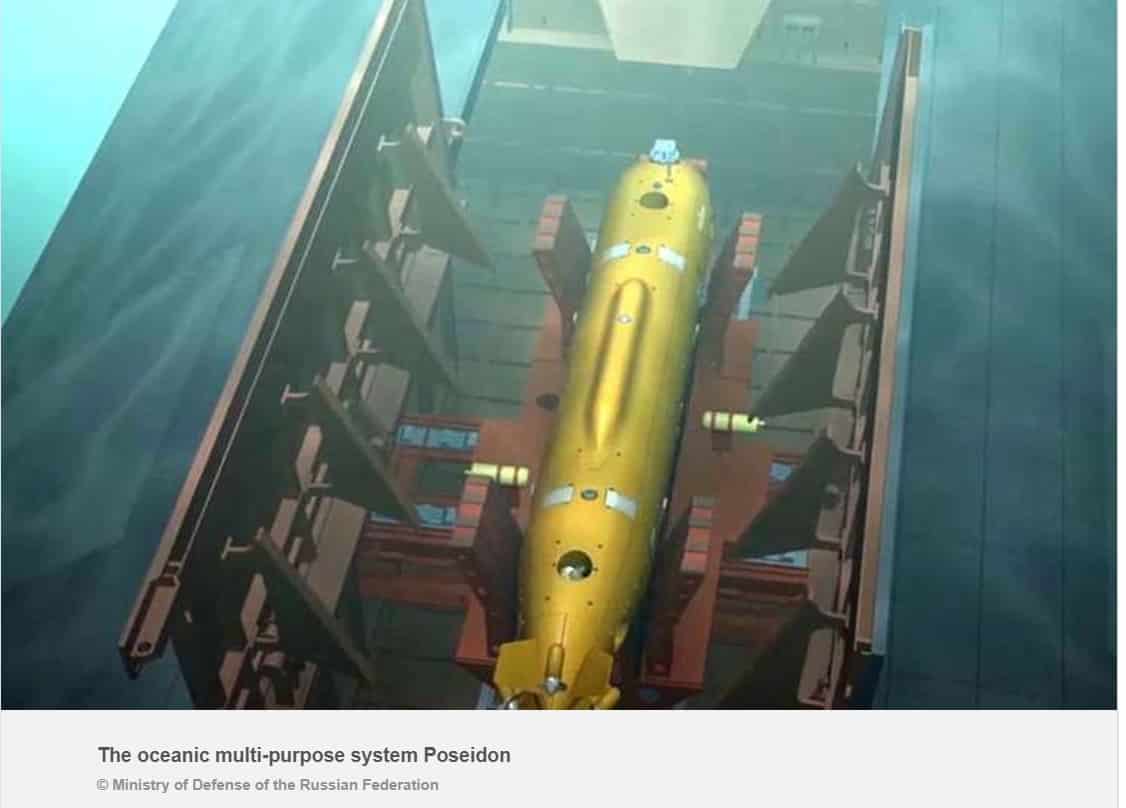 Editor’s note:  Even if Poseidon doesn’t carry a 100 megaton nuke as some claim, America’s nuclear defenses are, as of now, totally useless.  If this weapon exists, and we have every reason to believe it does and can be built in large quantities, Russia can simply “pull the plug” on the US or Europe at any time, flooding and radiating costs, sinking subs and aircraft carriers, erasing near-shore base and economically devastating any enemy.

MOSCOW,  /TASS/. The unmanned underwater vehicle (UUV) from the oceanic multi-purpose system Poseidon will be able to autonomously skirt any enemy defense systems, which will make it invulnerable with regard to its performance characteristics, a defense industry source told TASS on Sunday.

“On its way to a target, Poseidon will be able to avoid and overcome any antisubmarine barriers and other enemy defense systems due to the fully automated operation system,” the source said.

The source noted that the UUV’s running depth will exceed 1 km, and “new technical solutions will ensure the maximal speed of 200 km/h.” “All together, the intellectual and performance characteristics of the vehicle will make it invulnerable and secure a guaranteed target destruction,” he added.

The multi-purpose system Poseidon will include a special-purpose nuclear submarine and unmanned underwater vehicles on board. The source reiterated that “the vehicle from the system is intended not just for strategic tasks, but for destruction, for example, of enemy carrier groups.”

TASS has no official confirmation of the information provided by the source.

On Saturday, Russian President Vladimir Putin reported the end of the key stage of testing for the strategic unmanned underwater vehicle Poseidon. In late December last year a defense industry source told TASS that the testing of the UUV’s nuclear power unit was underway at sea at the moment. The source noted that the reactor had been mounted on the hull of the operating vehicle.

Putin first said about the unmanned underwater vehicle with the nuclear power unit in his address to the Federal Assembly in March 2019. The president reported that these UUVs will be equipped with both conventional and nuclear payloads and will be able to destroy enemy infrastructural facilities, carrier groups and other targets.