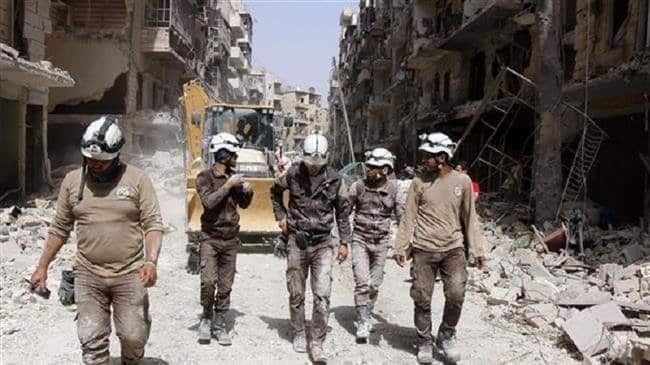 The Arabic-language service of Russian Sputnik News Agency reported that Tahrir al-Sham terrorists have transferred a chlorine cargo to Southern Idlib from the command center of Turkistani Islamic Party in Jisr al-Shoghour region.

The source noted that the chemical consignment comprised of five cargos of chlorine gas sent by two ambulances belonging to the White Helmets and under the supervision of three foreign experts from the UK and Belgium.

It said that the chlorine capsules are now stored in warehouses with cooling facilities in Khan Sheikhoun region in Southwestern Idlib.

The report comes as Russia had warned last Thursday about terrorists’ efforts to stage false-flag chemical attack on civilians to later accuse the Syrian army of the attack.

Also on Sunday, a number of commanders of Tahrir al-Sham al-Hay’at defected the terrorist group after differences among them increased in Idlib province.

The Arabic-language al-Watan newspaper quoted sources close to the terrorists in Northern Syria as saying that Abu Qaizan al-Misri, a notorious commander of Tahrir al-Sham, has defected the group, adding that he had differences with Tahrir al-Sham ringleader Abu Mohammad Jolani on Turkey after the latter’s support for the Turkish army’s operations in Eastern Euphrates.

Other reports also said that Abu Malik al-Tali, another senior commander of Tahrir al-Sham with close ties to Jolani, who was the terrorist group’s main man to supervise commanders has also defected Tahrir al-Sham.

In another development in the past few days, a number of Tahrir al-Sham commanders and members, including one of the Egyptian leaders of the group named Abu Mus’ab Misri, were killed by unknown assailants in Idlib province.

Also in the past 24 hours, the Syrian army heavily pounded the military positions and movements of the terrorists in Northern Hama and Southern Idlib after warding off their offensive.

The Syrian Army attacks came in response to the Turkistani Islamic Party attacks on their positions in Northern Hama and Southern Idlib.

The Syrian Army heavily pounded the terrorists’ movements and military positions in the villages of al-Sarmanieh, Havash, al-Hoveijeh to North and Northwest of Hama, inflicting heavy losses on them.

In Southern Idlib, the Syrian Army also fended off an attack by Tahrir al-Sham al-Hay’at (the Levant Liberation Board or the Al-Nusra Front) on their positions from al-Hobait and al-Kasik.

The terrorists sustained heavy losses in the failed attacks on the Syrian Army military positions.

The Syrian Army units also pounded the terrorists’ military positions in the village of Safouhen in Jabal al-Zawiyeh in Southern Idlib, destroying one of their arms depot and military equipment.

The Syrian Army also destroyed the headquarters of the terrorists in Northern Hama and Southern Idlib as government troops continue to repel attacks by the militants in the same region.

The US Army continued reinforcing its military bases in Syria despite US President Donald Trump’s declared decision for a pullout.

Field sources reported that a massive US military convoy has been sent to a US-controlled military base in Eastern Euphrates in Aleppo province.

The sources noted that the US military convoy crossed into Syria from Iraqi Kurdistan Region via al-Walid passage with the help of the US-backed Kurdish militants.

They said that the US troops have sent a sum of 70 trucks and oil tankers carrying logistical support, ammunition, military equipment and vehicles for a military base near Ain al-Arab in Northeastern Aleppo which is the largest US military base in Northern Syria.

The dispatch of new military convoys by the US comes while President Trump has declared a pullout of the US troops from Syria.

Field sources from Hasaka province reported that the rallies were held on Saturday to protest at SDF’s incapability to supply the needs of the displaced community sheltered in the camp.

The camp populatoin are suffering lack of basic needs and commodities, hygiene and cold which have led to the death of at least 36 children so far, the locals said.