Why is there a fight over a wall?  It can’t be the money.  America just bought two more aircraft carriers at $7-10 billion each, and if they are like the last one, they will arrive broken and unfixable.

It isn’t just that, $5 or $10 billion for a wall?  Reagan spent $2.5 trillion on a missile defense system and, lo and behold, were one to believe the popular narrative of 9/11, fat and slow airliners hijacked and flown by illiterates with box cutters only narrowly escaped killing up to 40,000 Americans while the Pentagon, with its trillion dollar plus plus plus missile system was helpless.

No wait, so much like Auschwitz and Dachau that IDF “concentration camp” guard shoot down into the camps below, assuming we can safely call Gaza and other walled off areas “camps,” just like in the Spielberg film, Schindler’s List.

Then again, we are hit with another question, are Americans being protected by a wall or being walled in?

What isn’t being said about the exodus from Israel is “who is leaving.”  To offset the migration back to the US and Europe and particularly to Latin America, Israel is pulling in “Jewish immigrants.”

The problem is, according to our good friends in Israel, none are really Jewish, few are educated like earlier immigrants, and many stay on public assistance for years.  These “newcomers” fill the West Bank’s disputed settlements where jobs are hours away and the quality of life, though better than in the camps, is at best depressing.

You see, living on either side of a wall is pretty much the same, if there is a wall, there is a prison and just the thought of a wall is an abomination or well should be.  Think of the 1933 blockbuster film, King Kong.  Islanders spent generations walling themselves off, and of course selecting from among their own the necessary human sacrifices as well, all to be safe from the giant monkey. 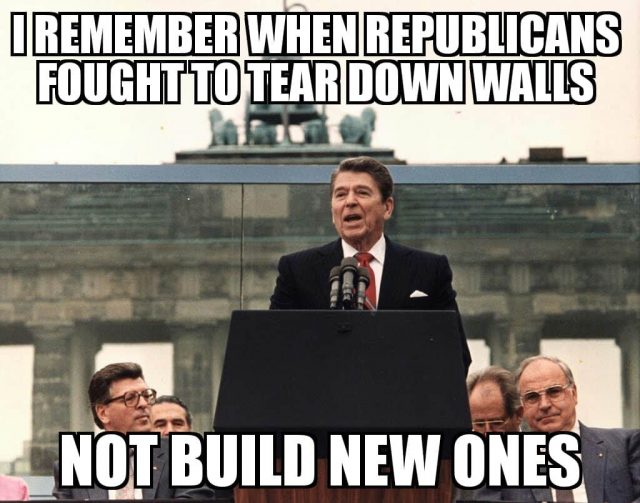 In America, it’s the scary “Hispanics” from the South.  From Wikipedia:

“The demographics of Hispanic and Latino Americans depict a population that is the second-largest ethnic group in the United States, 52 million people or 16.7% of the national population, of them, 47 Million are American citizens.

Hispanic population is much younger than the rest of the country, less educated, less wealthy, with a very large immigrant component, of no less than two dozen national origins and of every race, with a longer life expectancy than their fellow Americans, and geographically concentrated in the southwestern United States.

A large proportion of Hispanics that came from Latin America to the U.S. as adults have academic degrees because public university systems in most countries of Latin America are free or very low cost and some of them continue their education or career in the US. More than 40 % of Hispanic students are in college or are attending to college.”

So, let’s take stock here, you have 50 million Hispanic Americans inside the wall and untold millions on the other side clambering to get in, or so we are told.  With 20,000 border patrol agents guarding the border, backed up by 200,000 armed police in the border states alone, one might wonder why so much fear?

There are 16 legal entry points to the US for pedestrians and 42 million crossed from Mexico into the US last year, crossed legally.  It’s been pointed out that since the Great Recession, more illegal undocumented immigrants have left the United States than entered it, and illegal border crossings are at the lowest levels they have been in decades.

If we build a wall, how are they going to get out?  Trump never thought of that one, not hardly.

The real issue isn’t money or even that you can tunnel under a wall easily enough or that, as some sources indicate, “illegals” as they are called, are more likely to enter the US hidden in the endless stream of NAFTA trucks as opposed to crawling through tunnels and walking dozens of miles over snake infested deserts.

Were one to be honest, there would be no illegal immigration were it not for Border Patrol and police agencies turning a blind eye to those willing to work for illegally low wages doing the most dangerous and disgusting work imaginable.  America’s new generation of millennials won’t pluck chickens or nail down roofs, not them.

Without illegal immigrants, no one in America could afford to eat, but more than that, even Donald Trump would suffer.  Only days ago, he did make efforts to weed out the dozens or perhaps hundreds of illegal aliens he has been employing for decades.

In fact, both the Trump and Kushner family fortunes are built on providing substandard housing to illegal immigrants.  Let us not forget the story of Trump’s own immigration frauds.  From Time Magazine, November 28, 2017:

“Donald Trump quietly paid $1.4 million in 1998 to settle a class-action lawsuit that alleged he stiffed a union pension fund by employing undocumented Polish laborers to demolish a department store to make way for Trump Tower.

The amount became public this week after a judge released previously sealed settlement documents in response to a motion filed by Time Inc. and the Reporters Committee for Freedom of the Press in 2016.

“This Order shall remain confidential in accordance with the parties’ agreement at the October 26, 1998 settlement conference,” reads the settlement agreement, which was signed on Dec. 30, 1998, by District Court Judge Thomas P. Griesa of New York’s Southern District.

The case originated in the summer of 1980, when Trump was under pressure to finish the demolition of the Bonwit Teller building on Fifth Avenue in New York City so that he could begin construction on his signature project, the Trump Tower.

As noted in an Aug. 25, 2016, story in TIME, Trump hired a group of undocumented Polish laborers who put in “12-hour shifts with inadequate safety equipment at subpar wages that their contractor paid sporadically, if at all.”

Their hiring led to years-long litigation that Trump finally settled in 1998.”

Lest we mention that the current first lady was brought into the US on a questionable immigration visa based on her “special talents.”  Yes, Slovenia has attractive models but is that a “special skill?”  From Politico, August 4, 2016:

“Nude photographs published this week are raising fresh questions about the accuracy of a key aspect of Melania Trump’s biography: her immigration status when she first came to the United States to work as a model.

The racy photos of the would-be first lady, published in the New York Post on Sunday and Monday, inadvertently highlight inconsistencies in the various accounts she has provided over the years. And, immigration experts say, there’s even a slim chance that any years-old misrepresentations to immigration authorities could pose legal problems for her today.

While Melania and her husband, Republican presidential nominee Donald Trump, have said she came to the United States legally, her own statements suggest she first came to the country on a short-term visa that would not have authorized her to work as a model. Trump has also said she came to New York in 1996, but the nude photo shoot places her in the United States in 1995, as does a biography published in February by Slovenian journalists.

The inconsistencies come on top of reports by CBS News and GQ Magazine that she falsely claimed to have obtained a college degree in Slovenia but could be more politically damaging because her husband has made opposition to illegal immigration the foundation of his presidential run.”

As far as immigration abuse goes, Trump is only a minor player.  Corporate “big ag” companies, one of many industries, have made billions fostering illegal immigration.  The real champion of a porous border was then California governor and later “acting president,” Ronald Reagan, whose cozy relationship with the Imperial Valley Growers Association led to millions of new undocumented Californians.

When the bogus “fear factor” is pushed aside and the equally bogus reports of armies of “poor and filthy” throwing themselves at the American border subside, if that is allowed, certain unpleasant realities will set in.

Americans, not all but too many, don’t like hard work.  They don’t like to get dirty.  Americans want health care, decent housing and a normal life like their counterparts in Germany, France and Italy but America’s current wage climate won’t allow that.

In fact, for most Americans, homelessness and starvation is a real threat, even for those who hoped to enter the imaginary middle class because of education and expertise.  It is all too common for college graduates to live at home into their 30s doing menial labor, even for those with computer programming skills or advanced degrees in business.

Without illegal immigration, the US would have long ago been forced to adopt a $15 an hour minimum wage.  Texas with its population of nearly 30 million and supposed “roaring economy,” has a state minimum wage of $7.25.  If you don’t think illegal immigration is responsible for this kind of starvation level pay, and the massive profits of those who benefit from slave labor, an education in economics is needed.

The jobs that pay $7.25 for legal workers in Texas pay as little as $4.00 for illegal workers.  The same jobs in Michigan, for instance, pay $12 to $15 per hour.  If you are starting to get the picture, that illegal immigration is and always has been engineered into the system by big business, the exact same people helping Trump push for the wall, the contradictory nature of what is going on has to be clear.

Thus, the wall will be built, not to protect America but as a symbol of a nation of inmates, not citizens.