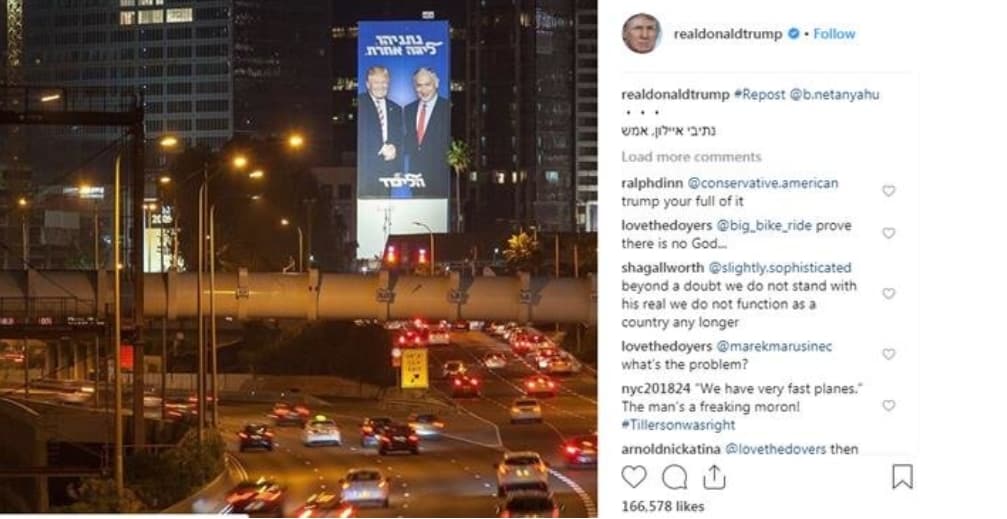 An Israeli paper speculates that the administration of US President Donald Trump could be meddling in Israel’s elections to help secure a win for Prime Minister Benjamin Netanyahu.

In a report on Tuesday, The Jerusalem Post raised the suspicion after Trump shared a photo directly from Netanyahu’s Instagram account, which showed an election poster made by Netanyahu’s ruling Likud party of the two shaking hands and smiling.

The advertisement captioned “Netanyahu: In a different league” prompted similar criticism after first showing up in Tel Aviv.

It has now turned up elsewhere across streets in the Israeli-occupied territories, said Arutz Sheva on its website.

The Jerusalem Post further pointed to the large numbers of likes and comments under Trump’s share, saying this raised “concerns about election interference.”

The network went as far as saying Likud had “recruited” Trump to promote its election chances.

Late last month, it was reported that the party had released a promotional video glorifying the two politicians’ relationship by boasting about Trump’s relocation of the US embassy from Tel Aviv to the holy occupied city of Jerusalem al-Quds last May.

The embassy relocation flew in the face of internationally-recognized Palestinian demands that the occupied city’s eastern part serve as the capital of their future state.

It also circumvented a United Nations General Assembly resolution that had called on Trump to retract its recognition of al-Quds as Israel’s “capital,” which he had announced in late 2017.

Likud’s video begins with a text on the screen stating, “They said it’s impossible,” referring to the embassy transfer.

It also features Trump’s announcement of the relocation and Netanyahu’s statement that “the US embassy needs to be here, in Jerusalem (al-Quds).”

Trump began contributing to Netanyahu’s political powerbase in 2013, when he appeared in a video made by a Likud promoter, voicing all-out verbal support for the premier. “

So vote for Benjamin, terrific guy, terrific leader, great for Israel,” Trump had said in the footage.

Netanyahu faces four corruption cases, and reports say Israeli Attorney General Avichai Mandelblit has reached a decision to indict him prior to April’s elections on bribery charges. He has been the target of regular protests, including in front of Mandelblit’s residence in northern Israel, in favor of his resignation.

Reports say the Israeli Attorney General has reached a decision to indict Prime Minister Benjamin Netanyahu on corruption charges in a bribery case.

Yair Lapid, who chairs the opposition Yesh Atid party, has warned that if Netanyahu emerged victorious, he would immediately pass a bill that would help him evade prosecution, The Jerusalem Post reported on Monday.

Lapid said the premier would use an election victory as a mandate to justify closing the investigations.

“He wants power because power gives him the ability to save himself. From his perspective, if he won’t be in power, he’ll end up in jail. So he wants to win and pass the laws that will stop him from being investigated,” the opposition politician said.