[ Editor’s Note: Military logistics is historically viewed as a boring subject to the general public, despite battles and wars being lost on this item alone.

Confederate General Nathan Bedford Forrest was once asked why he had such a successful battlefield career, to which he replied, “Get there firstus, with the mostus.”

This could be viewed as flamboyance on his part, because on another occasion, when asked about his successful raiding, he said, “I hit’em where they ain’t”.

But this Defense Department report asking for big money to rebuild the logistics chain to support a big war is anything but flamboyant, getting no mainstream coverage, which is why I took an interest.

Combining this with the alleged pullout from Syria, the pending peace agreement with the Taliban that will include American troops leaving, one might see a realigning of our military power for some other plans.

This call for major funding to support a major war kind of screams out that someone has one in the hopper. Gosh, I wonder if it could happen just before the 2020 elections, and “interfere” with it… JD ] 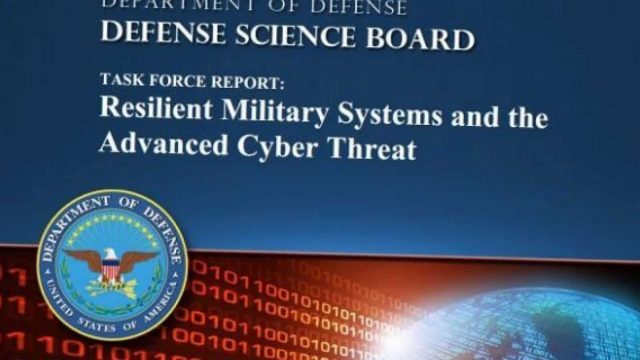 We are off to a huge news cycle for 2019, with everything from shifting sands in the Mideast, to what some say could be a growing class rebellion in the EU, which might tip its house of cards over.

The Trump White House interprets its Syria policy differently day after day. More countries state their intentions to resume ties with Syria, including many in Europe. And the same EU has left Iran standing at the altar over its phantom Special Purpose Vehicle that Mogherini said would be ready by year end, but which appears to have morphed into a “dark project”.

Lost among all the current high profile stories was a Pentagon report that slipped by getting much news coverage, but continues the US long march from a new Cold War to a hot one. The US Defense Science Board issued a report titled Task Force on Survivable Logistics. Although it has a somewhat innocuous title, it is a message in a bottle to us all.

In short, the report was a maximum effort to sell a US military logistics crisis to fight a World War with a “strategic adversary”. And “crisis” was used in describing the situation, indicating that the US has allowed the military logistics supply chain to deteriorate badly, due to funding going into other things.

But there was no mention in the report of our fighting new fake wars after blowing trillions in failed and dead-end US military adventures in the Mideast that have left a wide path of destruction in their wake; and all this was done when no real war had been declared.

Wading through the report, I got the feeling that, after Trump had rolled out his nuclear modernization program with its big price tag and bragged he was going to build the biggest and best military machine on the planet, these logistics chiefs wanted to get in on the action. Dear Mr. President, when we outspend everyone else put together, just who did you have in mind to use this big bad machine on?

And as to the drafters of the report, I would ask them, if we do have crises logistics problems when we have over 700 bases worldwide, with members of NATO creeping up to the Russian and Chinese borders to be able to threaten them with a quick delivery first strike, then what country has a tiny fraction of the logistics power needed to attack Europe or the US? Successful merchants are not in the habit of killing their customers.

Frankly, there is no one. The three main bogeymen – China, Russia, and Iran – have their hands full with defending against the growing US threat with its huge navy, air power, and the largest logistics air fleet on the planet, and more prepositioned supplies than anyone else has. The last time I looked, the targeted countries had no feasible force projection, in terms of moving masses of troops to take and hold conquests.

Russia and China are investing heavily in mutually assured destruction, as that is their only real defense when facing the vastly numerically superior Western military forces, based on defense spending alone. A conventional war of attrition would make them the bookmaker’s choice. But let’s dig a little deeper.

NATO and the US have a huge number of planes, with a fleet of F-35s on the way that might bankrupt many EU countries after their purchase by the expensive maintenance that the US companies made sure would keep them rich a few decades into the future.

But when we get to down on the ground, it gets even worse. Germany published this week that it would take 16 years of current spending levels just to bring all of its war machinery into working order. Other EU countries face not only worse logistics problems but poor training and lack of combat experience.

Britain is having trouble even getting its small navy out to sea, due major breakdowns of old boats. And it continues to have a shortage of trained personnel and morale. And yet, despite these huge problems, it spent a fortune on a new aircraft carrier and insists on building new nuclear subs that it has no money for.

The country now has 25% living in poverty, a level matched by a number of southern EU countries. We can expect that NATO’s equipment and state of readiness would have them struggling to hold credible drills.

Forgive me for asking, but who in the world does the West need to be defended from? Russia? China? Or maybe the Iranians and Syrians? Who is pulling whose leg here on who the strategic threat is? Russia and China have spent two decades building their domestic economies, with lots of Western investment, I might add. They put their peoples’ standard of living first, and it worked well for them. Is that what made them targets, their success?

Russia discovered during the short Georgian War that its military was in bad shape from major neglect, and it began a long overdue modernization that has really come to bloom over the last few years. But Russia did this when it was not $22 trillion in debt, and climbing. It does not have 750 foreign bases.

So I view this Pentagon report as having a crocodile-tears aspect to it, asking the American people to bury themselves in more debt by manufactured threats to scare them into supporting it. Many might view that, if a military were onboard actually doing this, as being a threat to its own people.

Both Russia and China, because they have a deep bench of technical expertise and little foreign debt, unlike the US, had to focus on technical superiority to effectively be able to defend themselves from a US coalition attack. It is their defensive build up that our own military is spinning as an offensive one.

Many of the Vietnam Vets, those who have not yet died off from Agent Orange, see this as preparation for abusing another generation of Americans with fake threat wars, like the anti-domino theory operation they fought in. This included my own brother who died from Agent Orange complications in his mid-50s as a retired Army Ranger Colonel.

My family has tasted the bitter fruit of war, from our Revolution from the British Crown, to my Confederate ancestors, to my mother becoming a WWII widow at age 16, and my father who was a fighter pilot who miraculously survived a mid-air collision with another plane. Those were at least real wars in the traditional sense, although there was definitely some major prestaging going on with WWII.

We now have the sad state of affairs with Eastern Europe being groomed as expendable cannon fodder in the next continental war, perhaps to be sacrificed to wear down the Russian Western defenses in an early war of attrition.

The coming age of hypersonic weapons is going to put tremendous pressure on militaries to not get caught by a first strike, which for all practical purposes would require launching one first. The public would never be told the truth about such an event when it happens, as to who shot first.

Yet, despite the hair-trigger precipice we see ourselves heading toward, we hear few calls for taking stock of the approaching train wreck. Both parties in Congress are onboard Russia- and China-phobia, and both would be happy to send Americans off to die for Israel in the Mideast and blame it all on the country that has not invaded anyone in a thousand years, Iran.

America has been bankrupted by the Deep State. Their burying us in debt that ended up in their coffers has had them laughing all the way to the bank, amused that a people who would so meekly submit should deserve anything other than the short end of the stick.

Here at Veterans Today we never get depressed over what the bad guys do, but what the good guys don’t do that could save us. Never have so many owed so little to so few, as the current leadership that has befallen us like a dark cloud.