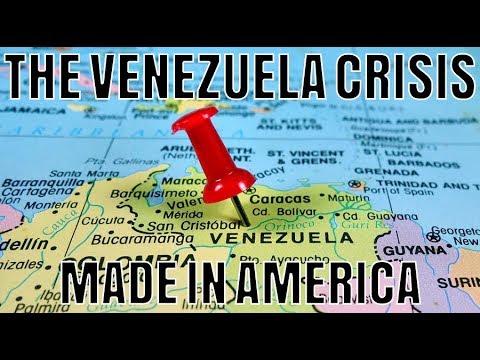 If you don’t believe that Trump is part of the Deep State, then just take a look at what’s going on in Venezuela. The man who unequivocally swore that he would put an intermission to perpetual wars or nation building or even US influence in other countries is now carrying the Neocon flag virtually everywhere.

The United States has already put its stamp of approval on Guaido.[1] We are simply repeating history here. Remember why the Anglo-American establishment overthrew a democratically elected president in Iran by the name of Muhammad Mossadegh?

The British newspaper, The Independent, has recently reported: “Venezuela’s government-in-waiting will allow foreign private oil companies a greater stake in joint ventures with its state-owned oil giant, Juan Guaido’s envoy to the US has said.”[3] Guaido’s representative, Carlos Vecchio, has said: “The majority of the oil production that we want to increase will be with the private sector.”[4]

This “private sector” stuff is just another phraseology for disaster. You can safely say that it is another word for the oligarchs, the very people who don’t give a damn about the average person or national economy but who want to pursue their wicked activity via “free trade” and capitalism.[6] The US in particular has used these vehicles to destroy economic and social developments in countries like Guatemala.[7] Now the United States is fixed on Venezuela. Russia, however, has said very clearly that this is “destructive meddling.”

Russia is spot on here. It has been recently reported that the US has been smuggling in weapons to Venezuela presumably in order to support the opposition.[8] Trump preposterously declared: “We stand with the Venezuelan people in their noble quest for freedom.”[9]

Who is this man fooling this time? We just had a prolonged conflict in Syria, and now Trump is invoking a “noble quest for freedom” to perpetuate a diabolical ideology, as if people are simply dumb. Well, it’s not going to work for us, Mr. Trump. We are not all blind and zombies. The moral and political order will win, whether you like it or not.