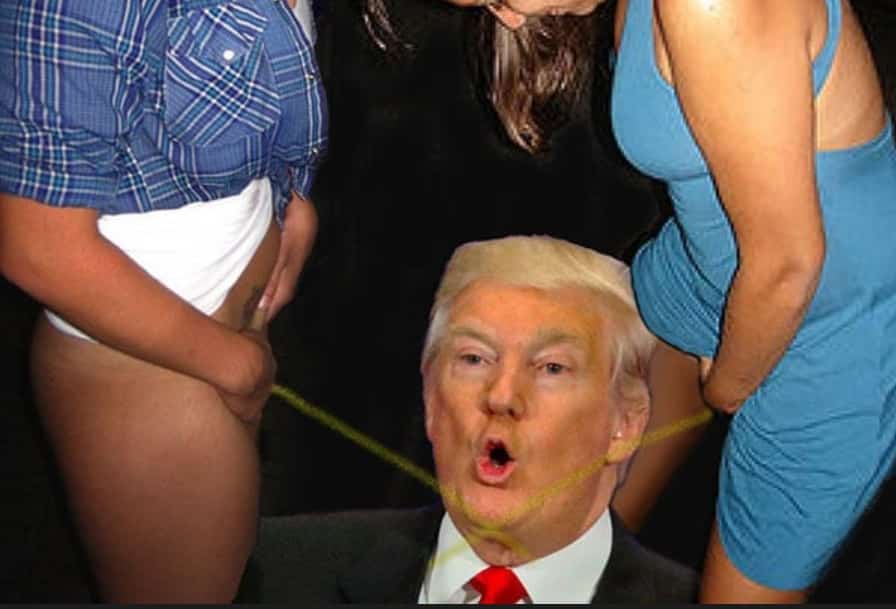 Do listen carefully ass&%*#’s:  PissGate is the real deal, only the tiniest part of what is held over Trump’s head.  Were Trump a combat vet (very very flawed Mueller is, by the way, a Marine Vietnam vet), I would look on him differently.

The issue is this, and the desire to find someone of substance behind Trump is a waste of time.  There are no solutions there, he is too compromised.

Do remember that, here at VT, we don’t give information out to idiots who couldn’t handle the truth in the first place.  I have spent decades collecting and collating intelligence most of you can’t even imagine.  It wouldn’t fit into the fake school and brain dead world 99% of you live in.  We owe you nothing.

You were given John Kennedy, his brother Bobby, Jimmie Carter, among others, and America pissed on them the way cheap whores piss on Donnie.  You only get so many chances and now America is paying the piper.

Note this, we are the Russia experts.  Right now, we are trying to duck the new congressional investigations on Americans tied to Russia.  Even the FBI considers us the highest source when it comes to Russia, Iran, Syria and Pakistan. (Turkey?)

They openly recognize that VT’s networks are better than the CIAs and have said as much.

Back in 2014, in Damascus, I addressed a Middle East security conference and, for the first time, outlined, for an hour to a totally silent/shocked audience, the nature of the beast, how terrorism is a simple tool of organized crime.

Sitting next to me was a former NATO Chief of Intelligence/Nuclear Operations and on the other, Syria’s Minister of Justice.  Only 5 minutes of the address is made public and on YouTube somewhere.

You simply aren’t going to get that and other material, it can never be put in public domain, it isn’t allowed.

I go through this with Steele and others, why I won’t cater to public opinion.  My answer is simple, better to talk to a hamster.  After generations of down-breeding, particularly of Northern Europeans who think they run the world, of propaganda and silliness, any attempt to motivate the ignorant and powerless to sudden awareness is insanity.

Every few days I put this out there, your governments are middle management in organized crime.

When Soros talks about taking down borders and ending armies, ending conflicts, he is suddenly a pariah.

The real question is this, how long can we hold things together, keep America’s bankruptcy sort of secret, and hold back the post 9/11 mechanisms created to enslave us all.

Think of this for a second, Americans are armed to the teeth.  I certainly am, though for me it is a hobby.  Consider who the armed Americans are, those in love with fascism, the ignorant, the Fox News/Limbaugh pigshit eaters who would be first to push the rest of us into the darkness.

You think that’s an accident?  When it was found that the NRA was laundering endless millions in mob cash into the Trump campaign (supposedly “Russian” money), how many of you burned those membership cards?

The NRA is the Kosher Nostra and, if you are a member, you are a “fellow traveler” and traitor.

Don’t claim you don’t know.  Nobody is that stupid, it’s that you just don’t care.

As for the piece below, the intel term for the material used to control sources is “Reptile files.”  The Steele dossier is simply a small piece of the Trump reptile file.  Most of congress has reptile files.  I went over this with a former senior FBI official who came to me when he could no longer stay silent.

Now I stay silent for him.

Part of his story is that people all over Washington are “fake.”  I wasn’t buying it, it sounded so “conspiratorial.”  He said they, and I mean governors, members of congress, generals and admirals, were “walk ins” like in the series the Americans or the wonderful Travolta film, The Experts.

Past that, I was told how even local governments are all controlled, every contract, every major permit, how over half the public officials in the US, and we are talking over 200,000, are on a payroll that traces back to drug cartels and the Kosher Nostra world organized crime syndicate.

For our boy Donnie, he is a human sewer of flaws, least of which are those from the totally true dossier.  The truth is so much worse.  Problem is, he isn’t the worst.  He is simply the loudest.*

Sergei Millian—a Belarus-born businessman who served as an unwitting source for the infamous Steele dossier—built a working relationship with Trump aide George Papadopoulos in 2016 and offered to serve as a go-between for the Trump campaign and a Belarusan author with connections to the Russian government, The Washington Post reports.

Millian has disappeared from public view since he was revealed to be one of Christopher Steele’s sources and has rejected or ignored attempts from House and Senate intelligence committees to interview him.

The new report suggests he was closer to Trump’s world than was previously known. Papadopoulos thinks Millian was working with the FBI to target the Trump campaign—a claim rejected by the Post’s FBI sources.

In an interview in 2016 with ABC News, Millian claimed to have high-level contacts in the Russian government and to have met Michael Cohen and Trump himself. The Steele dossier cited Millian as a source for the assertion that a “well-developed conspiracy of cooperation” existed between the Trump campaign and Russian leaders, he was also cited as the source for the “pee tape” allegations.