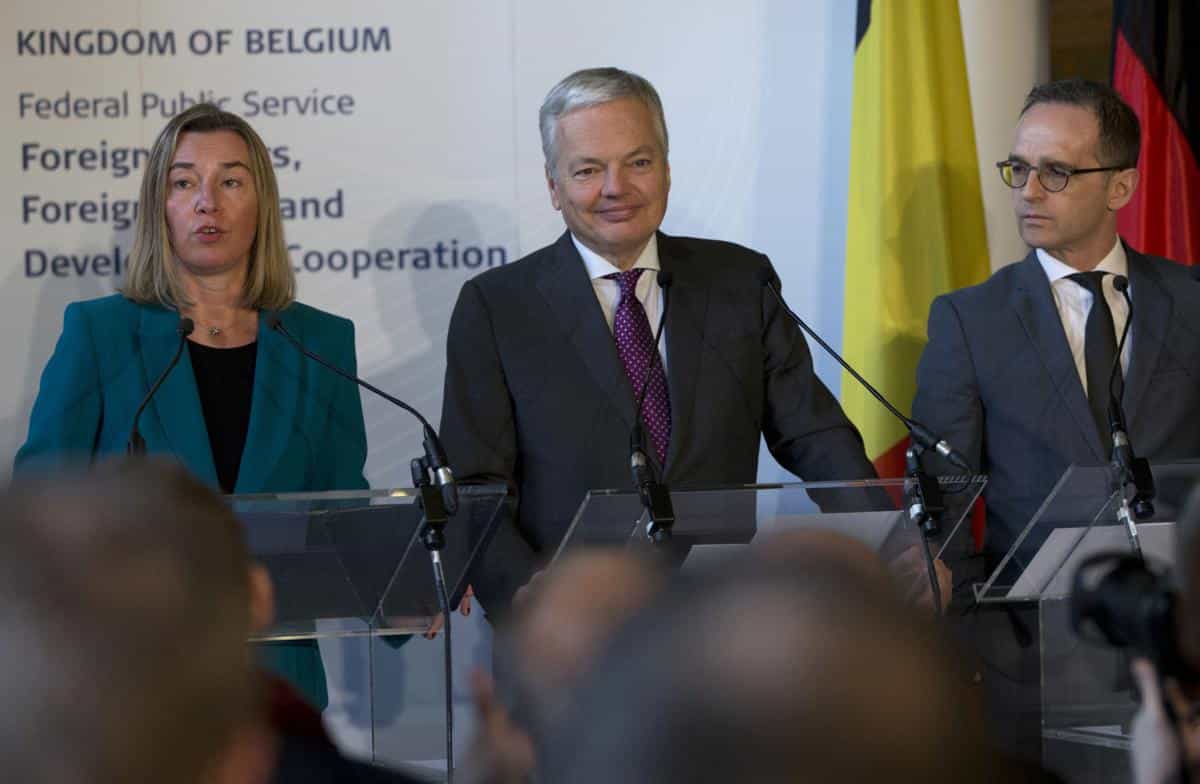 [ Editor’s Note: I will not say that after I wrote this article, that the conditions the EU are trying to slip into “starting up” the Special Purpose Vehicle”, versus just sitting on its “registration” are not quite at the level of putting a date rape drug into the process.

But I would say it ranks being described as a sedative, where the deal will lay comatose because the EU knows Iran will never agree to any international supervision of its finances or military policy beyond what it has agreed to in the JCPOA.

The EU hustlers, obviously at the pressure of the US, or wanting to earn some brownie points with the US in its own troublesome trade negotiations, may have agreed to put the extra requirements in.

Of course they were dead on arrival in Tehran, where the Iranians have learned the hard way as to leaving in renegotiation or re-interpretation room within an agreement, or tacked onto it that is clearly only to the benefit of the proposer.

Iran has a right to be angry as at this stage the SPV is only targeted to handle trade payments for items not under sanction. That the EU wants to claim this was a huge task to get set up is hard to believe.

The follow up on the story has gone cold after Iran told the SPV folks where they could stick their conditions. We will be monitoring what I have historically called the “duck and dodge” game the EU might play on Iran on cranking up trade.

The US game could be to stall the EU SPV move, or advise it quietly to pretend they are doing it, dragging it out, until  Iran gets tired of the hustle and then restarts it nuclear program. That is a big win for Trump and Bibi, if the later is not in jail by then. What doesn’t fit with that scenario is that the EU NEEDS the Iranian export market for its long term health.

We see chaos theory being imposed on Europe, an upscale version of divide and conquer game by the US and Israel, who love to cause problems for people so stupid they will even turn to them someday for “help”. You can’t get any dumber than that… Jim W. Dean ]

I had written two pending SPV stories earlier this week, after Monday’s news that an “announcement was imminent”. I was betting that it would not happen yet, and did a review of where the process was at that point, examining both the external and internal challenges that the EU faced.

But last night, the news came that Spain was upset that it had not been included in the EU talks on Yemen. Spain learned of its exclusion after it was asked to sign the ten-point European Commission (EC) geopolitical statement to the SPV announcement.

That news alone was a huge shock. With the EU already needing to get all 28 member states onboard the SPV train, to then add a 10-point geopolitical document to the process seemed like a poison pill.

All I could guess was that the EC members wanted to protect themselves from charges of being “Iran lovers”, so they added on items about their unhappiness over Iran running terror operations in Europe and “meddling” in Yemen’s affairs. These EC people must be ghastly characters.

George Bush 43 had made a big splash by telling the world that the US would go anywhere in the world it needed to hunt down al-Qaeda, and no one blinked an eye. But Iran, with over 16,000 terror attack victims, 12,000 of them murdered by MEK, which was supported by the US and Israel, wants to knock off a couple of MEK guys living the good life in Europe. The EC seems to have a different rule book for Iran.

Another of the EC points was spanking Iran for supporting destabilization and terrorist operations in the Mideast. Gosh, why didn’t they tell me sooner, as I have not seen a grain of evidence for it. But I know Iran has lost more people fighting in Syria than all the Europeans together, minus the ones that were with ISIS of course.

Then we got shock number two this afternoon, which is that the SPV corporate vehicle had been registered in Paris on January 31st.

The hard-working main negotiators tabled the EC’s ten-point part of the program, perhaps wisely thinking that Iran might be at the end of its string waiting all this time, just to be held up by petty EU vanity spats.

The world has been waiting a long time for this, as it was frankly a showdown between the EU and US on whether it was going to be a virtual colony of the US, where it could not do business with any country that the US said no to. All we got is that “it’s coming, it’s coming”.

Today’s kickoff event laid out the bare bones of the deal. France, Germany and Britain, as members of the JCPOA, are front and center. They planted the SPV flag in the ground in Paris for their clearly stated reason that it enhances their national security to have Iran giving up all that it did on the front end of the deal. And despite Trump taking the US out of JCPOA, the EU wanted to assure Iran that they were still committed.

This initial filing is just the first step, designed essentially to handle payments for food, medicine and medical devices. Despite these items not being under sanction, finding a bank willing to take the gamble on handling a payment was a major problem. Banks feared that the US Treasury would cut them off from the SWIFT system, which would be shot in the head for a bank. The word on the street was that the US was looking for a bank to make an example of.

Treasury had already publicly stated that it was not worried about the SPV having any serious impact on the full sanctions program inflicted upon Iran. But everyone understands that handling payments for these non-sanctioned items is just the first step in the process. The US has threatened that anyone doing business with Iran will not be doing any business with the US.

The backdrop to the SPV story was the surprise in this week’s Senate Intelligence heads meeting on the world threat assessments. One of them was relating to US trade disputes and sanctions, and America’s unipolar foreign policy that was straining relations with many US allies.

The words were carefully chosen but the message was that America’s aggressive economic wars were creating a lot of distrust of American leadership. Trump, as usual, tweeted the next morning that the Intel heads did not know what they were talking about and needed to go back to school, an incredible public rebuke.

Before the day was over, cooler heads prevailed; and after a meeting next day at the White House, Trump claimed that the Intel Chiefs had been misquoted, another goof by Trump, because the transcripts showed otherwise.

So the EU has finally put its money where its mouth is. It wants Iran to stay in the JCPOA, and it will not if it does not get the benefits agreed to when it made its front-end acceptance of dismantling most of its civilian nuclear program and accepting the most strict inspections to date for anyone. The Israelis are still refusing to disclose anything about their program; and no one, including corporate media, pushes it as the elephant-in-the-living-room story that it is.

The real fork in the road on the Special Purpose Vehicle will come when it is opened up to handle payments for non-EU states, and then items that are on the sanctions list. Iran’s customers and vendors that also have business in the US, especially assets, are going to want to be sure their stockholders will not be asking for their heads on poles because they got the company banned from the US and their stock prices crashed.

Everyone will not be treated equally. Those that have important relationships or business that the US wants to keep will get a free pass. The others will not. But that may just be a short term victory for Trump. If the US starts wrecking companies, particularly in Allied countries with people losing their jobs, those folks will hate America with all the free time they will have on their hands.

We are now in the era of the Yellow Shirts, and we could see worldwide protest focusing on American uniploarism really being a form of Neo-colonialism.

The Intel heads were sending a message to Trump about taking American prestige down the tubes, as it is something that cannot be tweeted back. Trump, of course, will be the last person to know this, and would blame such a disaster on bad staff work.

He holds the world leader record for most bankruptcies and most criminal fraud cases that were all settled in civil court, with just his fake correspondence school running up a $25-million settlement tab.

The Intel heads incredibly publicly refuted one of the main justifications for Trump’s JCPOA withdrawal, by Dan Coats, National Intelligence Director and Gina Haspel telling him that Iran has no nuclear weapons program, when Trump’s secret co-president, Bibi Netanyahu has assured him that they do. Bibi, so far, has been silent.

The US media did not touch that “Israel lied” red line in any of the Senate hearing reporting. With the massive Israeli offensive espionage that goes on here, both Congress and the media are scared to death to mention a word about it, so a few big lies from Bibi will surely not trigger anything.

And last, as Trump has a big fight for his border wall as the anchor for his 2020 reelection campaign, proof that he is the guy that gets things done, the EU is faced with a similar situation of proving to its member states that they are not US vassals.

Neither can afford to lose, as they would not survive politically, so it will be a nasty fight. Bibi is desperate to get a war going with Iran that the US pays and bleeds for to save him from his legal troubles. God only knows what mischief he might come up with in February.