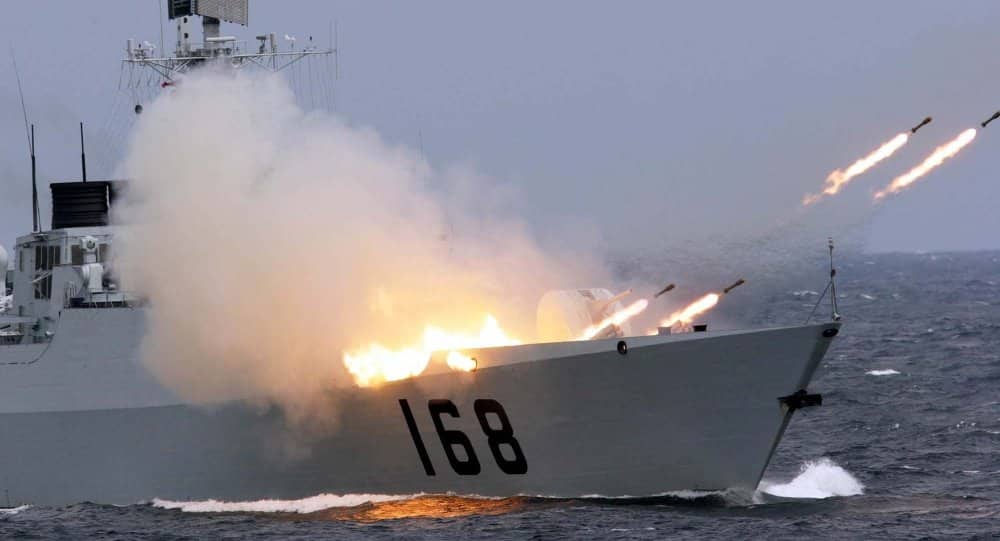 [ Editor’s Note: The issue of the US breaking with the INF Treaty was partly due to the situation of China not being in it, and therefore under no restrictions for intermediate range missiles. And that turned out to be exactly what it needs to defend itself from the US base network and US Navy that rings around China’s shores, where it is clearly in a defensive mode.

None of the US Navy medium range and air-launched missiles are limited from use against China, as it was not part of the INF Treaty; and if it had been, China could not have the missile defenses it does have now.

We can expect that China is working on its own hypersonic missiles and will produce them en masse at a low cost, as it has a deeper industrial base and pockets than Russia.

But by pushing Russia and China together with the New Cold War that the Deep State boys have ordered, the US is not in an arms race with the broken down, on-its-last-legs Soviet Union.

Europe’s stingy holding back on its NATO expenditures showed it preferred being under the US military umbrella, so it could put its capital into business development. Russia preferred to do the same, until NATO began its relentless march to the Russian border, which left Putin no choice but to modernize his military.

China’s medium range missiles are a defensive stop-gap measure, as its navy and air power are too small to defend even its huge coast line. A real shooting war with Taiwan would whittle it down even more.

Russia’s economy cannot produce large numbers of top-grade weapons quickly, which means that any serious losses in a start up fight would put it in a weak position conventionally. It cannot fight and win a war of attrition, hence its visible mutually-assured-destruction weapons would have to be its second line of defense, not its last.

I am mystified on the rationale that the US seems to have that it can get Russia and China under its thumb. A major war would tank the world economy anyway, regardless of the body count. Who would benefit from such chaos? … Jim W. Dean ]

MOSCOW (Sputnik) – The real reason for the US withdrawal from the Intermediate-Range Nuclear Forces Treaty (INF) is China deploying 1,000 medium and short-range missiles preventing a US presence in neighbouring seas, former Russian Security Council Secretary Andrey Kokoshin told Sputnik in an interview Friday.

“Evidently, the main target of the United States in connection with their withdrawal from this treaty is China. China, according to US estimates, set up a system of medium and short-range missiles of more than a thousand units aimed at the waters of the South China Sea and the East China Sea.

It does not allow the United States to enter these waters with impunity using aircraft-carrier strike groups… Accordingly, the Chinese army set up a significant group of high-precision weapons, primarily ballistic missiles, which are capable of hitting US aircraft carriers and US military bases in the region”, Kokoshin said.

READ MORE: Next US President May Be Interested in Reviving INF Treaty — Ex-US Official

He also stated that the Pentagon is planning to create a demonstration laser as part of a future orbital air defence system by the US.

“The Pentagon has recently announced a special missile defence report. US President Donald Trump spoke on the same topic. This document, among other things, sets the task to investigate the possibility of creating space-based missile defence systems with the use of powerful energy-efficient and compact lasers in the future. In the near future, the Pentagon plans to create a so-called demonstration low-power laser”, Kokoshin said.

If the United States withdraws from the Intermediate-Range Nuclear Forces Treaty and deploys missiles in Europe, Russia will find an adequate response to this move quite soon, he assured.

“I’m sure that an answer will be found if the United States deploys new ‘eurorockets’, and quite soon”, Kokoshin said, stressing that Russia had the required technical and strategical capabilities. “However, the general level of strategic stability would decrease significantly due to a new ‘action-counteraction’ cycle”, he added.

Last October, Trump announced his country’s intention to withdraw from the INF Treaty due to alleged violations by Russia. On 4 December, US Secretary of State Mike Pompeo said that Russia had 60 days to start to comply with the agreement, or, otherwise, the United States could leave the treaty on 2 February.

Russia has refuted allegations of breaching the agreement, noting in turn that launchers on US defence systems in Europe were capable of firing cruise missiles at ranges banned by the accord.

READ MORE: NATO Has Been Preparing For Collapse of INF Treaty for Months — Report

The INF Treaty was signed between the United States and the Soviet Union in 1987 and prohibited the development of ground-launched ballistic and cruise missiles with ranges between 500 and 5,500 kilometres (from 311 to 3,317 miles).