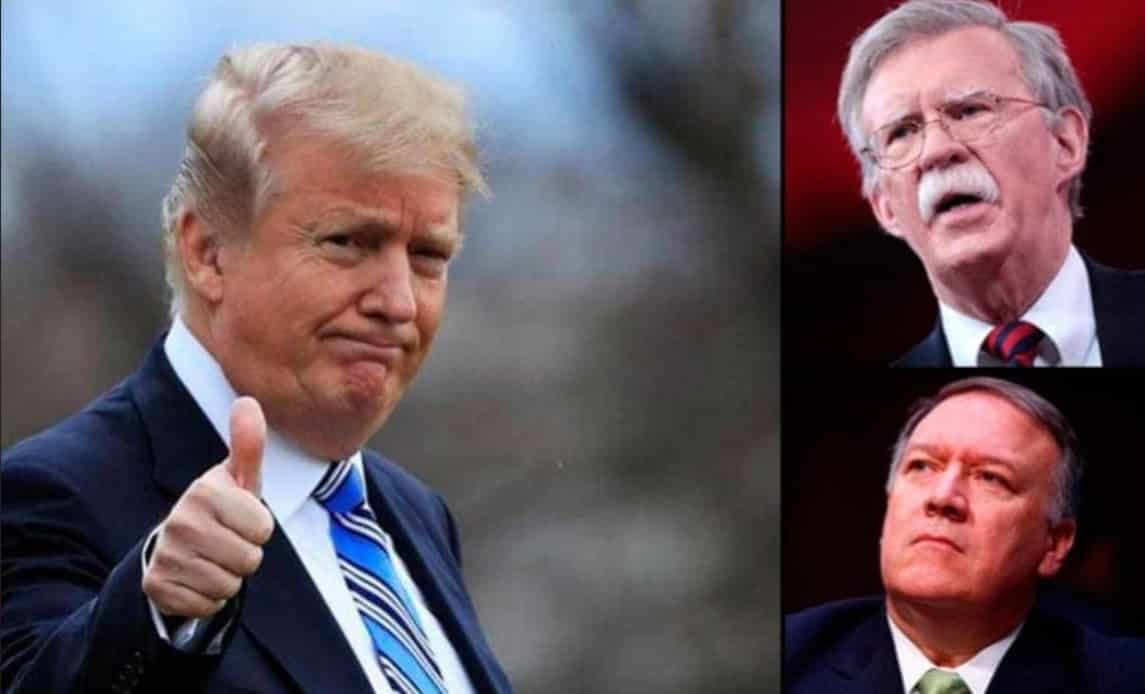 As the celebrations of the fortieth anniversary of the Iranian revolution comes to an end in Tehran, Secretary Mike Pompeo and National Security Advisor John Bolton are busy gathering an anti-Iran coalition in Warsaw to crush Iran’s clerical rulers once and for all. But there is nothing innovative about the Pompeo-Bolton plan.

In fact, Washington has been down this path numerous times before and it has invariably led to failure—even when much of the world was on America’s side. The question is not whether Bolton and Pompeo will succeed or not, but what they will push Donald Trump to do once their failure is clear for all to see.

America was on top of the world in 1991. The Soviet Union had collapsed, and America had become the sole superpower of the world. It had an unparalleled ability to shape both global and regional orders. After it defeated Saddam Hussein in the Persian Gulf War, it moved to establish a new security architecture for the Middle East through the Madrid conference. Though the gathering is most known for its efforts to resolve Arab-Israeli tensions, the second track of the conference focused on region-wide security issues.

All major regional states were invited except one: Iran.

Though Madrid wasn’t aimed at creating an anti-Iran coalition, it nevertheless set the foundation for a policy of uniting the region to contain Iran. As Israel turned in favor of making peace with the Palestinians under the new Rabin-Peres Labor government, it demanded that Washington sanction and weaken Iran in order to give Israel the space to risk making peace with the Arabs.

Israel played a critical role in convincing the Clinton administration to adopt the policy of Dual Containment in 1993—the idea that the new order in the region would be based on the dual containment of Iran and Iraq, while centered on Israel, Saudi Arabia and Egypt. According to Kenneth Pollack, who served as an Iran analyst with the CIA at the time, the policy was “designed to reassure Israel that the U.S. would keep Iran in check while Jerusalem embarked on the risky process of peacemaking.”

Iran was infuriated. It came out of the Iraq-Iran war weak, isolated and exhausted. The eight-year war with Saddam Hussein had devastated the country and the promises of the revolution were as distant then as they are today. Rather than becoming the leader of the Muslim world, Iran was shunned and marginalized.

Determined to save the revolution, President Hashemi Rafsanjani shifted strategy. Instead of violently exporting the revolution, he was going to turn Iran into a stunning economic success whose model other countries in the Islamic world would seek to emulate. This necessitated, however, improved relations with the West as Iran was in desperate need of investments and technology.

Rafsanjani made several attempts to lower tensions with the United States, including granting the American oil company Conoco a contract to develop one of Iran’s largest oil fields, but Washington was not interested. “We weren’t interested in creating a new opening towards Iran,” Clinton envoy Dennis Ross told me in 2004. “We were interested in containing what we saw as a threat.”

Rebuffed by Washington, Tehran shifted its focus towards sabotaging the American-Israeli plan to contain and isolate Iran. The weakest link in the American strategy, Tehran assessed, was the Israeli-Palestinian peace process. If it was blocked, Washington’s goal of marginalizing Iran would also fail.

It was at this point that Tehran began to heavily support Palestinian rejectionist groups that used violence and terror against Israel in the hope of collapsing the Oslo process. Despite Washington’s long-standing accusations of Iranian support for terror, it was still taken by surprise.

“What the Iranians did was to outsmart us by taking on the peace process. And they became very aggressive supporters of Palestinian terrorism,” Martin Indyk, the brainchild behind “dual containment” told me.

Washington eventually began to understand the critical strategic flaw in its policy of dual containment—by rejecting Iranian overtures and aiming to create a broad coalition to contain Tehran, the United States was giving Iran strong incentives to sabotage all of America’s policies in the Middle East. According to Indyk, the Iranians had “every incentive to oppose” the peace process.

“Our strategy was to, on one hand, use the engine of peacemaking to transform the region and on the other hand contain the [Iranians] through sanctions and isolation,” he said. “The two were symbiotic. The more we succeeded in making peace, the more isolated they would become. The more we succeeded in containing them, the more possible it would be to make peace. So they had an incentive to do us in on the peace process in order to defeat our policy of containment and isolation. And therefore, they took aim at the peace process.”

Though Iran’s actions strengthened Washington’s case for isolating the country, the end result was nevertheless one that deeply frustrated the United States: The peace process was leading nowhere, and Iran had strengthened its hand in the region by positioning itself as the leader of the rejectionist camp.

By the time George W. Bush entered office, dual containment had already run its course. The Bush team was no longer interested in containing Iraq and Iran; they wanted to overthrow their regimes and turn them into pliant pro-American states. Iran was, together with Iraq and North Korea, put in Bush’s Axis of Evil.

Realizing they were next on Bush invasion list, Tehran once again acted to sabotage America’s plans in the Middle East. By 2005, it was increasingly clear that the Iraq invasion was an abysmal failure and that America couldn’t take on Iran until it first had extracted itself from the wars in Iraq and Afghanistan. Bush had no choice but to shift towards a containment policy once again.

But it was too late. With the Saddam and Taliban regimes removed, Iran was unleashed. Its influence in the region was fast growing and despite the efforts to isolate it over its nuclear program, Tehran’s nuclear advances continued unabated. Iran had less than 150 centrifuges and no stockpile of enriched uranium in 2003. By the time Bush left office, Iran had more than 8,000 centrifuges and 1,500 kilograms of low enriched uranium—enough to produce one nuclear bomb.

Once again, Washington’s efforts to build an international coalition to contain Iran had failed spectacularly.

Washington only (temporarily) abandoned the goal of excluding Iran from the regional order through the Iran nuclear deal. Through the deal, Washington was now encouraging trade with Iran and actively seeking to include Iran in regional security dialogues. It was a massive shift that ended almost four decades of American efforts at containing Iran.

Obama only opted for this path after recognizing that Iran’s prolonged isolation was neither possible nor necessarily helpful. Even at the apex of its power, the United States had failed to contain Iran—even when it had much of the international community on its side. European governments had been seeking to convince Washington of this for decades.

“No one believes Iran can perpetually be put in a straightjacket,” Germany’s U.S. Ambassador Peter Wittig told me in 2015. More importantly, Obama realized that continuing on the failed path of isolating Iran eventually would bring the United States into open confrontation with Iran.

Perhaps this is why Bolton and Pompeo are pushing Trump down this proven path of failure. If isolating Iran failed at the unipolar moment, it simply cannot succeed today when the US is much weaker, Iran is much stronger, and most of the world worry more about Trump’s impulsiveness and unpredictability than about what remains of Iran’s revolutionary fervor.

Because its failure can still pave the path for the war with Iran Bolton has long been dreaming of.

Trita Parsi is the author of three books on Iran. His latest book is Losing an Enemy: Obama, Iran and the Triumph of Diplomacy .