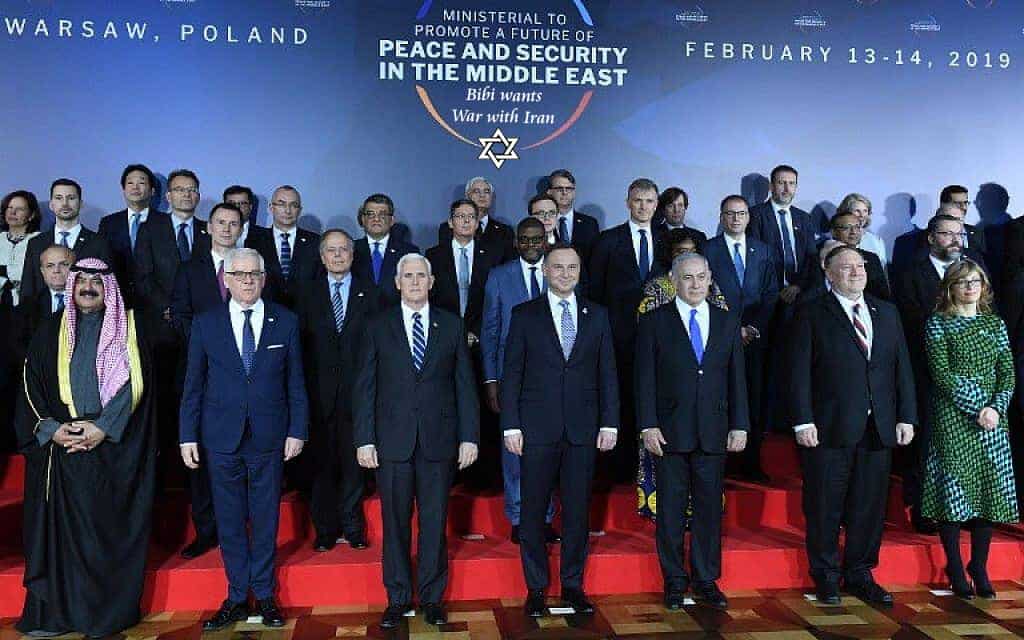 [ Editor’s Note: Forgive me for photoshopping the conference backdrop banner to highlight Bibi’s trying to hijack the conference theme. I just couldn’t pass it up 🙂

Press TV’s News Review is a new format they are teething, which always requires some quick moves. For example this show was for a different topic and then was switched a few minutes before show time. That said, for a new show format it has 15,000 views and over 200 comments, so it must be working.

Fortunately I have been working for several days on a Warsaw Conference piece for NEO, so I was up to speed on it. The only official event there today was dinner, so the day was spent on media spin, which was quite a show.

Bibi came right out and declared he was there to get a war going with Iran, thinking that would beef up his political standing back home and get the news off his pending indictments. He of course is looking for Arab cannon fodder to fight Iran. My bet the only takers will be those putting food in their pockets at the dinner table.

Rudi Guiliani was the head cheerleader fool, holding a rally for the MEK terrorist organization for which he has been a long time supporter. His pitch was for a “free Iran”, with MEK terrorists running the show. Welcome to America’s sociopathic political class.

The Syrian Astana group, Russia, Turkey and Iran will be meeting in Moscow tomorrow, to split the media overage on the Warsaw Conference. Only the usual Iran haters will be signing anything. Most of the lower delegations there were enjoying the free trip to Warsaw… JD ]

The US says the Washington-sponsored Middle East conference in Warsaw will discuss the future of the region’s stability and prosperity. Pompeo made the remarks during a joint press conference with the Polish foreign minister in Warsaw.

The two-day conference which begins on Wednesday was originally aimed at mounting international pressure on Iran. Washington’s change of tone came after the event received a cold welcome from its European allies.

The European Union foreign policy chief and several countries including Lebanon, Palestine and Russia have refused to attend the confab. Meanwhile, the Israeli premier, who is to attend the meeting, has said Iran, not the Israeli-Palestinian conflict will be the focus of talks. Tehran has denounced the summit, with Iran’s top diplomat saying the event is doomed to fail.