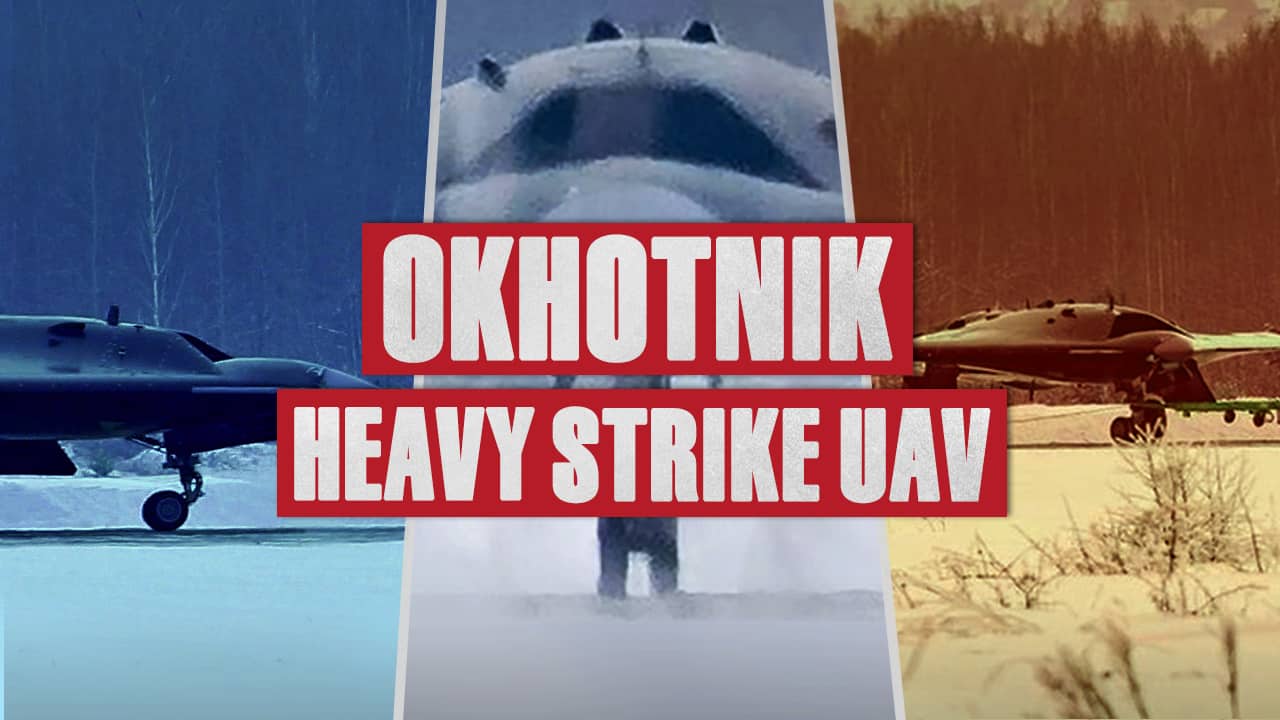 While overall the Russian Armed Forces display remarkable effectiveness and demonstrated a wide range of modern weapons, a number of gaps in Russia’s arsenal are also evident. Arguably the largest one is the absence of attack UAVs of any kind, comparable to either the propeller-driven Predators and Reapers intended for operations in a benign air defense environment, or heavier platforms intended for high-threat environments comparable to the US X-47B UCAS or France’s Neuron. It is therefore no surprise that there was an upsurge in reports of UAVs of various classes under development in Russia, up to and including the S-70 Okhotnik-B, under development by OKB Sukhoi, whose first flight is planned for 2019.

Okhotnik closely follows the blended-fuselage flying wing configuration used by the other heavy strike UAV’s mentioned above.  Like the X-47B, It is powered by a single turbofan engine with an intake on top of the fuselage, and its design most likely includes an internal ordnance bay for a variety of guided and unguided munitions. Most published estimates of Okhotnik’s capabilities suggest take-off weight in the vicinity of 20 metric tons and a top speed of around 1000km/hr. Like the X-47B, the combination of relatively small size and stealth would allow the Okhotnik to carry out airstrikes against heavily defended targets and survive even advanced air defenses. While a heavy, stealthy strike UAV is not exactly expendable, it is certainly more likely to be risked than a manned combat aircraft that costs several times more than the UAV. Heavy strike UAVs are therefore seen as a complement to scarcer and more expensive manned aircraft in situations where heavy air defenses are present.

Nevertheless, one probably should not expect the Okhotnik to be a carbon-copy of the Neuron or the X-47B, and for all the similarities there are also differences. The X-47B design emphasizes stealth including in the infrared spectrum, with an evident effort to reduce the heat of its turbofan exhaust, with the UAV being capable of sustaining only high subsonic speeds. By contrast, while the Okhotnik is officially described as having the top speed of only 920km/hour, its design is dominated by the powerful AL-41F afterburning turbofan which proved too large for installation on the Su-57, suggesting the Okhotnik might actually be capable of supersonic speeds and even of sustaining supersonic cruise without the need for afterburner, an important characteristic of 5th generation combat aircraft. In addition, on-board sensors aboard the X-47B are fairly limited, while the photos of the Okhotnik clearly show a nose radome, suggesting an on-board radar.

Given that the Okhotnik is being developed by the same design bureau that produced the Su-57, with that aircraft’s technologies being incorporated into its design in order for the two machines to be able to operate as a team, it stands to reason the fully developed Okhotnik will be capable of supersonic cruise—a necessary capability if it is to operate as part of the same mission package as the Su-57—and of air-to-air engagements.  Unlike the F-35 which is primarily an attack aircraft with a secondary air-to-air capability, the Su-57’s main mission is air combat, both within and beyond visual range. By the same token, while US combat UAVs of the last couple of decades have been designed exclusively for ground strike missions while under the control of a land-based operator from a remote location, Russia’s defense priorities are sufficiently different from the US and NATO to warrant different expectations for the Okhotnik. Given the need to fend off attacks by vastly larger numbers of F-22 and F-35s, the outnumbered Su-57 force would benefit from stealthy, supercruising Okhotniks with air-to-air sensors and weapons that could be vectored against the adversary’s stealth aircraft while the Su-57s themselves remain out of the range of enemy weapons.

The recently published information on Russian military procurement plans plainly indicate the very high priority being afforded to maintaining the ability to wage air and air defense operations against a technologically sophisticated adversary. This emphasis is a reasonable response to the US plans to rapidly ramp-up F-35 deliveries both to its own military and to its allies. But even with that emphasis, the cost of 5th generation fighters is such that Russia cannot possibly hope to match US and NATO in terms of numbers, and probably cannot afford the development of a small 5th-generation fighter that could be produced in larger numbers than the Su-57. But if a “hi–lo” mix of platforms comparable to the Su-27—MiG-29 or F-15—F-16 or even F-22—F-35 is to be maintained by the Russian Aerospace Forces, the “lo” part of the mix could well be filled by an unmanned platform.