Damascus, SANA- President Bashar al-Assad said that holding elections of  local councils on time proves the strength of the Syrian people and the state.

President al-Assad,  in a speech  during  his meeting with heads of local councils from all provinces on Monday added that the elections proves the failure of enemies’ bet to turn the Syrian state into a failed state unable to perform its tasks.

President al-Assad stressed that issuing law no. 107 was a significant step for enhancing effectiveness of the local administrations.

The President said that the launch of development projects locally will be integrated with the strategic projects of the state and this in itself is an investment of financial and human resources.

He added that one of the positive aspects of local administration’s law is to broaden the  participation in the development of the local community that manages resources. 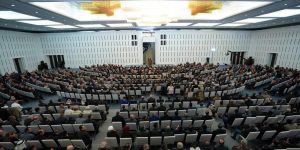 President al-Assad said that with liberating every inch, there is an agent or a traitor who collapsed after their sponsors betrayed them.

“After the improvement of field situation, we have the opportunity to make a qualitative leap in the work of the local administration that would reflect on all walks of life,” the President said.

President al-Assad added that the local units have become more able today to perform their tasks without depending on the central authority.

He stressed that the policies of some states towards Syria depended on supporting terrorism and promoting the attempt to apply a comprehensive decentralization to undermine the authority of the state.

President al-Assad underlined that the partition scheme isn’t new and it doesn’t stop at the borders of the Syrian state, but it covers the region as a whole.

President al-Assad added “the scheme of imposing hegemony on the world led by the US hasn’t changed and our people’s resistance has become more solid, affirming that the homeland isn’t a commodity and it is sacred and it has its real owners and not thieves.”

“After all of those years, the agents haven’t learnt that nothing gives man his value except his real belonging,” the President said, affirming that the only way to get rid of misguidance is to join the reconciliations and to hand over the arms to the Syrian state.

The President added “We have been able to eliminate terrorism thanks to our armed forces and the support by the supporting forces, the allies, the friends and the brothers.”

The President said “It couldn’t have been possible to protect the homeland without the unified popular will through different segments of the Syrian society.”

“The Syrian people have a deep-rooted history and they have resisted terrorism…We achieve victory with each other not on each other,” President al-Assad said.

President al-Assad said that that the Syrian state is working to return displaced people who left  their homes due to terrorism as their return is the only way to end their suffering.

He underlined that the absence of belonging to the homeland is the weapon used by the outside to target our homeland.

“The absence of belonging to the homeland is the fuel which is used by the foreign parties to target our homeland,” President al-Assad said, adding that the Syrian state works on the return of all the displaced due to terrorism because their return is the only way to end their suffering.

The President noted that the states concerned in the file of refugees are hindering their return and the main basis of the scheme hatched against Syria is the issue of the refugees which has been prepared before the beginning of the crisis.

He indicated that the issue of refugees has been a source of corruption that has been exploited by a number of states which are supporting terrorism, and the return of refugees will deprive those from the political and material benefit.

“The file of the refugees abroad is an attempt by the states which support terrorism to condemn the Syrian state,” the President said, adding ” We will not allow the sponsors of terrorism to transform the Syrian refugees into a political paper to achieve their interests.”

The President called upon everyone who left the homeland due to terrorism to contribute to the reconstruction process as the homeland is for all of its people.

“Our national awareness has foiled the sinister scheme of our enemies which hasn’t finished yet…Some are still entrapped by the schemes of partition hatched by our enemies,” President al-Assad said.

President al-Assad asserted that “Dialogue is necessary, but there is a difference between the proposals that create dialogue and others which create partition and we should focus on the common things.”

“Criticism is a necessary issue when there is a default but it should be objective,” the President noted.

The President stressed that dialogue should be a fruitful one that is based on facts and not emotions, adding that such dialogue differentiates between those who have real problems and those who are opportunistic.

He noted that social media have contributed to a certain extent to the deterioration of the situation in the country.

“We all know that we are in a state of blockade, and we should deal with this positively and cooperatively,” he said, adding that “we shouldn’t think that war is over, and this is addressed to both citizens and officials alike.”

The President pointed out that “We are facing four wars. The first war is a military one; the second is the blockade, the third is via the internet and the forth is the war launched by the corrupt people.”

The state of negligence that happened recently in relation to shortage of gas cylinders is due to the lack of transparency on the part of the institutions concerned towards the citizens, the President noted.

Her stressed that the current situation demands great caution, explaining that since the enemies have failed through supporting terrorism and through their agents, they will seek to create chaos from inside the Syrian society.

He went on saying that the major challenge now is providing the basic living materials to the citizens that are suffering due to the blockade.

“The blockade,” he said, “is a battle in itself. It is a battle of attack and retreat similar to the military battles.”

The President said that those who suffer need to have their problems dealt with, not to listen to rhetorical speeches.

He highlighted the important role the Local Administration plays since “no matter how much honesty, integrity and how many good laws we have, they cannot be managed centrally.”

The President added that “We have laws, but we lack the standards and mechanisms, which even if they exist are weak and not good, and without the standards we will not be able to solve any problems, therefore we have to be practical in our dialogues.”

The President said that rebuilding the minds and reforming the souls is the biggest challenge, not the reconstruction of the infrastructure.

“When our enemies started the war, they knew that they would leave us destructive infrastructure, and they know that we will reconstruct it, but the hardest thing is to deal with the intellectual structure and we should not fail in that,” the President said.

The President stressed that the future of Syria is decided exclusively by the Syrians.

He said the sovereignty of states is a sacred thing, and that if this sovereignty is violated through aggression and terrorism, this does not mean abandoning its essence, which is the independent national decision.

The President stressed that “the constitution is not subject to bargaining. We will not allow the hostile states to achieve any of their objectives through their agents who hold the Syrian nationality.”

He added that hostile countries are still insisting on their aggression and obstruction of any special process if it is serious like Sochi and Astana.

He said that any role of the UN is welcomed if it is based on the UN Charter.

The President reaffirmed that there will be no dialogue between the national party and the agents, stressing that it is the people’s steadfastness and their support to the Syrian Arab Army is what has protected the homeland.

He went on saying that those who conspired against Syria have failed in their reliance on the terrorists and the agents in the political process, and therefore they have moved to the third stage, which is activating the Turkish agent in the northern areas.

The President made it clear that “Syria will be liberated to the last inch, and the interferers and occupiers are enemies.”

President al-Assad addressed the groups that serve as agents to the US saying: “the Americans will not protect you, and you will be a tool for bargaining in their hands. Only the Syrian Arab Army can defend you.”

“When we stand in one trench and aim in the same direction instead of aiming at each other, no threat can make us worried no matter how big,” the President said.

He added “We will not forget our kidnapped citizens, hundreds of whom have been liberated. We will not stop working until liberating them and we will not spare any chance to ensure their return.”

The President said “We all have responsibility and a national obligation to stand by the families of the martyrs and the injured.”

“The big recovery and stability will only be achieved through eliminating all the terrorists to the last one,” he stressed.