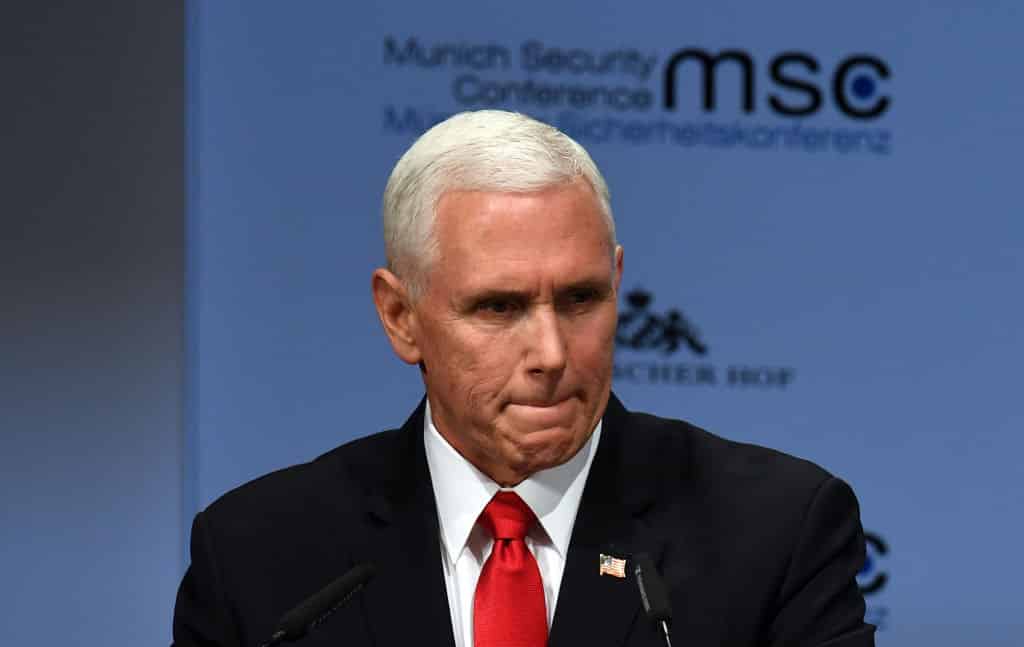 [ Editor’s Note: Pence’s goose is cooked on the EU stage now for the rest of the Trump term, whether it’s 2 or 6 more years. Never has an American leader been so publicly rejected in an international conference, and never has one deserved it more.

As for having any clout at all to advance US foreign policy, Pence is a dead man walking, and he will probably be the last to know, as zealots usually are. He, and others like him, are America’s Christian Jihadis, extremists to the bone.

Even Trump might be able to figure this out himself and change VP horses. Pence was delivering US State policy, just as Pompeo was, but who did not get as bad a response. EU people don’t like either of them, but they really don’t like Pence. He should have stayed home. I hope you are listening, Donald. Letting Pence play “Shock Jock” while Pompeo was the “good guy”, no one was buying but Poland and Israel.

It’s not that the Europeans are blameless. They bought into Libya, the Syrian war, and Iraq and Afghanistan before that, all disasters for the targets, but with no major blood splashed on Europe, other than the terror war that cranked into high gear during the Syrian war.

All the West is in shaky financial condition, with highly leveraged debt and big social program promises to keep. That is why, when the axe is about ready to fall, the Deep State industrialists will want to get a war going, as it has saved them many times, so they use what works. Everyone should be ready … Jim W. Dean ]

US Vice President Mike Pence’s four-day trip to Europe succeeded only in deepening divisions with traditional allies over questions such as Iran and Venezuela and offered little hope in how to deal with threats ranging from terrorism to climate change, EU diplomats and officials say.

Pence was met with silence at the Munich Security Conference in Germany on Friday after he delivered his signature line: “I bring you greetings from the 45th president of the United States, President Donald Trump.”

The cold reception exposed the weakened state of Western diplomacy in the face of Trump’s assertiveness, Reuters said in a report on Sunday, citing European diplomats and politicians.

Pence’s predecessor, Joe Biden, who was also present at the conference, promised that “America will be back” once Trump leaves office, winning a standing ovation from the guests.

Anxiety about Washington’s international role are being felt by ordinary people as well as foreign policy specialists, according to recent surveys around the world.

In Germany and France, half the population see US power as a threat, a sharp increase from 2013 and a view shared by 37 percent of Britons, the Washington-based Pew Research Center said in a report last week.

PressTV-US VP slams EU over its position on Iran, Russia

US Vice President Mike Pence rebuked European powers over Russia, Iran and Venezuela on Saturday in a renewed attack on Washington’s traditional allies.

Pence’s message was that the pillars of US foreign policy were being rebuilt on a different foundation, which includes increasing pressure on Iran, containing China, and requiring European powers to fall into line.

During a speech in Warsaw on Thursday, Pence accused Britain, France and Germany of trying to undermine US sanctions on Iran and called for the European Union to recognize Venezuelan congressional leader Juan Guaido as president over Nicolas Maduro, whom he called a dictator.

That drew an angry response from Spain’s Foreign Minister Josep Borrell, who said the bloc could acknowledge Guaido as interim president until new elections.

“US pressure has a tendency to make us do the opposite. US pressure is counterproductive. It’s best that they don’t try and pressure us,” a senior French diplomat told Reuters.