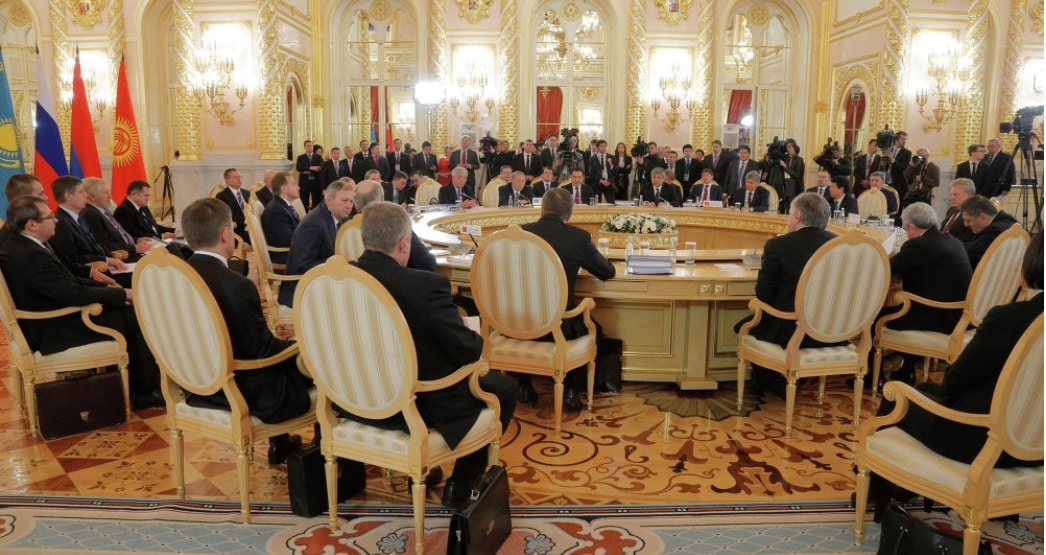 Sputnik/Moscow: Israel, one of Washington’s key allies in the Middle East, refused to impose anti-Russian sanctions and is seeking to sign a free trade agreement with the Russia-led Eurasian Economic Union (EAEU), Israeli publicist Avigdor Eskin told Sputnik, explaining how Iran’s plans to ink a similar pact with the bloc may affect Tel Aviv.

“Israel is one of the world leaders in the areas of high-tech, intelligence, military, agriculture and medicine. We can offer our partners in the Eurasian Economic Union best products,” Eskin stressed.

In April 2018 Tel Aviv resumed negotiations with Russia on free trade with the EAEU which initially started in October 2015, nine months after the bloc’s official establishment on 1 January 2015. According to the Israeli publicist, this development “is very natural”.

“There are around million and a half Russian speaking Israelis today,” Eskin pointed out. “Many of them are very successful in the areas of high-tech, science, arts. And they are very successful also in politics. For example, the current Knesset speaker, Yuli Edelstein, won the first place in the primaries of the Likud list for the next elections. He is a former resident of Moscow, former prisoner of Zion and his father is a Russian Orthodox priest until this very day in Kostroma area”.

The political commentator highlighted that today ties between Russia and Israel are very strong.”Check, how many daily flights are between Moscow and Tel-Aviv,” Eskin remarked. “Therefore this is only natural to strengthen and develop these ties. I also want to mention a great job on this matter of Russian ambassador to Israel Anatoly Viktorov”.

When asked whether the US had signalled displeasure over Tel Aviv’s negotiations with the Russia-led bloc, the commentator stressed that “there has been no sign of any dissatisfaction from Washington so far”.

“We do not go to the agreement with any intention to undermine our relations with the friendliest [sic] Trump administration,” Eskin noted. “However, unlike other US allies, we refused to join sanctions against Russia. Today Israel is much stronger and more independent state that our partners in Western Europe. We have our deep interests to further improve the relations with Russia”.

Here is the rub, according to the media outlet, as Tel Aviv is advocating the increase in pressure on the Islamic Republic — Israel’s longstanding geopolitical rival in the region. “The State of Israel supports increasing the economic pressure on Iran so that it will change its behaviour,” an unnamed Israeli official told the newspaper.Two questions then arise: First, whether Iran’s participation in the EAEU endeavour could reduce the negative effect of sanctions imposed on Iran by Donald Trump’s following Washington’s pull-out from the Joint Comprehensive Plan of Action (JCPOA); second, whether all these could affect Tel Aviv’s determination to sign the FTA with the bloc.

“Israel is working on the framework which will put us in the position where some conflicts of interests may appear. This is being discussed,” Eskin responded commenting on the matter.

According to the Israeli publicist, Washington’s unilateral sanctions “work perfectly”. He noted that many European businesses had already fled Iran because of Trump’s sanctions, despite the fact that the EU continues to adhere to the JCPOA.

“There will be no substance to any deal with Iran now”, he opined. “Hopefully, the picture will change soon and Iran will become a friend and a partner of Israel again”.In the beginning of February 2019, the UK, Germany, France announced the creation of the INSTEX (Instrument for Supporting Trade Exchanges), a special purpose vehicle (SPV) to allow trade with Iran amid the US sanctions.

However, as Iranian Foreign Minister Mohammad Javad Zarif remarked on 17 February, the EU’s current efforts are insufficient to maintain the JCPOA. “INSTEX falls short of commitments by the E3 [France, Germany, and Britain] to save the nuclear deal,” Zarif stated at the Munich Security Conference.

Meanwhile, international players are signalling their willingness to bolster ties with the EAEU. Vietnam signed a free trade agreement with the bloc in 2015. China inked a trade and economic cooperation agreement with the EAEU on 17 May 2018, while Iran, Egypt, Singapore, Israel and India are considering joining the union’s economic initiatives in foreseeable future.

In addition, on 14 November 2018, Tigran Sargsyan, the chairman of the board of the Eurasian Economic Commission (EEC) and Secretary General of the Association of Southeast Asian Nations (ASEAN) Lim Jock Hoi signed a memorandum of understanding between the EEC and ASEAN in Singapore.

The EAEU is comprised of Russia, Belarus, Kazakhstan, Kyrgyzstan and Armenia and is designed to encourage regional economic integration and ensure the free movement of goods, services, and capital between member states.

The views and opinions expressed by the speaker and the contributor do not necessarily reflect those of Sputnik.