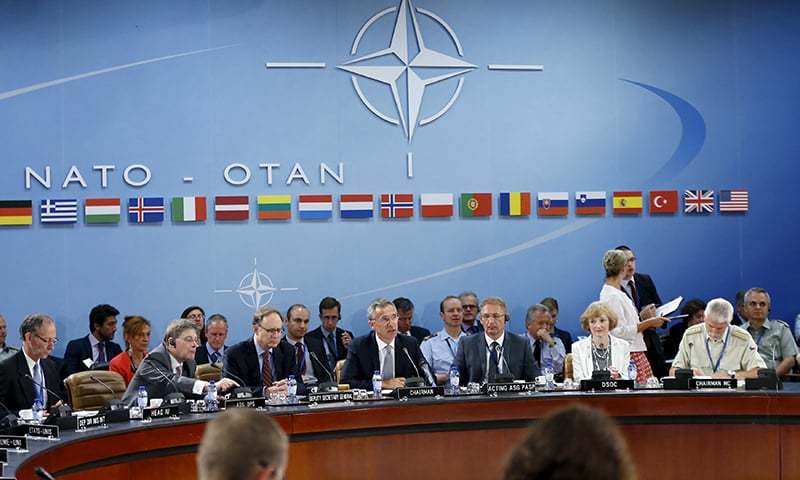 [ Editor’s Note: Ms. Malic shines the spotlight on the Deep State’s attempt at using one of it major tools, the Atlantic Council, to attempt the impossible, which is to sell that we are all better at just sitting on the sidelines and letting the Deep State crowd run the whole show for us, more efficiently.

Anyone who objects to this of course, goes into a compute database as an enemy of the Deep State. I hope my name is there, and if it isn’t I will feel slighted.

Their Declaration of Principles is nothing more than and open attack on the UN that it is being replaced by a more “efficient” system. I don’t remember the UN getting a vote on it. But I don’t expect any pushback by the UN crowd which sadly more and more seems to focus majorly on keeping their budgets funded for the cushy jobs they have, including the to die for retirement benefits.

I agree in spirit with the Atlanta Council that they UN has failed in its mission as it was rigged at the start as a Deep State tool with the victors of WWII to be the opening stage of a world government. But as is always the case with the Deep State boys, the only votes they honor are ones they have been able to rig.

And lastly the Council shows once again their are two classes of people, one that makes the rules, and one that has to follow them. This is presented to us, as enlightened statesmanship. You just can’t make this stuff up… Jim W. Dean ]

Taking over the annual Munich security conference, the Atlantic Council has come out with a declaration of principles that seeks to legitimize the rogue behavior of the West after the Cold War as a ‘rules-based’ world order.

For almost three decades now, Washington and its numerous clients and allies have insisted they were only upholding a “rules-based international order” against those who seek to challenge it, be it “rogue states” such as North Korea and Iran or great powers such as Russia and China.

In the process, this self-styled “international community” trampled actual rules and laws to sanction, bomb, invade, occupy and regime-change countries that stood in its way – while claiming to be acting in the interests of the peace, democracy and commerce.

Back in 2007, Russian President Vladimir Putin stood up at the Munich Security Conference in Germany and denounced this behavior, arguing that the US has “overstepped its national borders in every way,” imposing “economic, political, cultural and educational policies” on other nations while holding itself exempt from any rules and limitations.

This past weekend, the Atlantic Council – a think-tank backed by the US, NATO and other allied governments – used the platform of the Munich conference to announce a “declaration of principles” that explicitly seeks to revise the international order along the very lines Putin criticized, essentially establishing its signatories as the judge, jury and executioner of international law as they write it.

In the words of John Bellinger, one of the declaration’s authors, it was “loosely modeled on the Atlantic Charter,” the WWII-era document establishing the US-UK alliance. Yet the new document has far more in common with the goals of Germany, Italy and Japan in that it is explicitly revisionist, saying:

We will seek to revise and strengthen the international system to reflect these principles and advance them on the basis of international law.

Those undersigned are endorsing a “standing mechanism” that would track “compliance” with the principles outlined in the declaration and “urge our governments to act when these principles are violated.”

Wasn’t that supposed to be the job of the United Nations? And how is it respectful of others’ freedom and sovereignty to impose values on them at gunpoint? The declaration creates more questions than it purports to answer.

The seven-point platform pays lip service to “freedom and justice, democracy and self-determination, peace and security, free markets and equal opportunity.” It also demands of signatories to “support an open global economy.”

Point Four somehow managed to advocate for private property and capitalism as well as welfare state and open borders, asserting the right to “own property, purchase goods and services, and invest in free and open markets” as well as “free and fair flow of trade and investment” – but also demanding of governments to “facilitate access to food, water, shelter, medical services, and education for their own citizens and others in need” (emphasis added).

Point Five also talks about an “open and healthy planet” in vague terms that combine overarching global environmentalism and migration across only nominally controlled borders.

The true gem is Point Six, the “right of assistance” that would require governments to “allow their citizens to receive assistance from others to advance these principles, including, in non-free societies, support to non-violent groups, political parties, and individuals aiming to foster democracy or human rights” but also the signatories to intervene “where governments or other actors are unwilling or unable to cease or remedy flagrant or systematic violations.”

Who would define “non-free societies”? Why of course, the signatories of the Atlantic Council declaration!

The commitment to peace and security in Point Three asks the signatories to “refrain from the use of force, except as just and necessary to advance these principles.” (emphasis added) The devil is in the details, as they say – in this case, in that qualifying clause.

There is a massive amount of hypocrisy in the US and its allies advocating for free markets and open flow of goods and services, while being the world’s leading source of sanctions, blacklists and blockades against those who resist their demands.

Likewise, the notion of initiating force in order to promote the values of this declaration is a total mockery of values advocated by the champions of modern democracy – though it might be easily recognizable to ancient Athenians, who demanded the surrender of Melos with the argument that “the strong do what they can and the weak suffer what they must.”

Perhaps the most pernicious notion in the declaration, however, is that it expands the duty to uphold its values from governments to “private entities and individuals where they are able.” It is not hard to see how this is a direct attempt to lend legitimacy to the legion of quasi-NGOs backed by Western governments and their “philanthropist” hitmen like George Soros.

There is only one tiny little problem with this: it upends the entire international order based on the 1648 Treaty of Westphalia, which gave governments the monopoly on force within their territory. The preceding Thirty Years War had seen much of Europe devastated by a conflict that started as a dynastic dispute only to spiral into a religious war characterized by widespread massacres and atrocities committed by official militaries as much as militias and mercenaries.

Looking at the committee that drafted this declaration, it becomes clear why it seeks to legitimize the lawlessness of the post-Cold War behavior by the bombers of Yugoslavia, invaders of Iraq, and regime-changers of Libya. Among the co-chairs of the drafting commission are former US Secretary of State Madeleine Albright, and former George W. Bush national security advisor Stephen Hadley, uniting the neoliberals and neoconservatives around the idea of a US-led global hegemony.

The list of former government officials who signed the declaration also reads as a who’s who of US empire boosters, from former NATO GenSec Anders Fogh Rasmussen (Denmark) to former foreign ministers Tzipi Livni (Israel), Radek Sikorski (Poland), and David Miliband and Malcolm Rifkind – Labour and Tory, respectively – of the UK.

The world could do worse than to take their declarations with a large chunk of salt.