A group of seven perpetually-whingeing MPs has quit the UK Labour Party to go independent. They are Chuka Umunna, Luciana Berger, Chris Leslie, Angela Smith, Mike Gapes, Gavin Shuker and Ann Coffey. Their gripes are various but boil down to disgruntlement with Jeremy Corbyn and his leadership especially over Brexit and anti-Semitism.

Stop the War Coalition observes that the seven “have voted for war, foreign military intervention and the renewal of Trident throughout their political careers. A warmongering foreign policy is central to the so-called values they talked about in today’s launch and is arguably the main unifying strand of their political ideologies.”

STWC points ot that the four of them who sat in Parliament in 2003 (Ann Coffey, Mike Gapes, Chris Leslie and Angela Smith) all voted for the Iraq War and have continually supported the policy of military intervention. With seven fewer warmongers in the Labour Party, says STWC, “now is a chance to redouble our efforts to ensure that Labour is never dragged into any more catastrophic wars and is a party rooted in peace.”

Momentum, a large pro-Corbyn pressure group dedicated to “transforming Labour”, take a swipe at the deserters’ new ‘independent’ status and especially Chris Leslie and Chuka Umunna. “Just when Labour has the flailing Tories on the ropes, they have decided to leave the fight. Whatever they say, their real goal is simply to stop Jeremy Corbyn’s Labour Party coming to power and prevent a transformation of this country for the many, not the few.

“They are even reportedly planning to deliberately stand in marginal seats where splitting part of the Labour vote would have the most effect – that effect being that the Tory wins. In short, they are trying to create a Blairite spoiler party.

“Leslie and Chuka have been undermining the leadership from the very moment Jeremy was elected….  They will do everything they can to sabotage Labour now, and we know they’ll have major donors and corporate backing already lined up.” 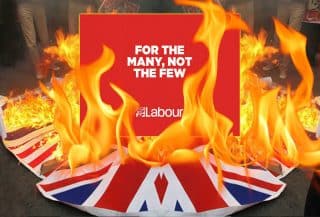 Without the party ‘brand’ where would they be?.

According to the BBC Ms Berger said Labour had become institutionally anti-Semitic and she was “embarrassed and ashamed” to stay. “I am leaving behind a culture of bullying, bigotry and intimidation.”

Chris Leslie said Labour under Corbyn had been “hijacked by the machine politics of the hard left”.

Mike Gapes said he was “sickened that Labour is now perceived by many as a racist, anti-Semitic party” and “furious that the Labour leadership is complicit in facilitating Brexit”.

Angela Smith had previously told Channel 4 News: “Labour MPs are being pushed to the very edge by the attitude of the leadership on Key issues such as Bexit and anti-Semitism.”

And the ever-talkative Chuka Umunna said they had taken the first step and urged other Labour MPs – and members of other parties – to join them in building a new politics. “It is time we dumped this country’s old-fashioned politics and created an alternative that does justice to who we are today and gives this country a politics fit for the here and now – the 21st Century.”

Jeremy Corbyn responded by expressing disappointment that the MPs felt unable to continue working for the policies that “inspired millions” at the 2017 election.

Some in the media are comparing the Seven with the Gang of Four who quit the Labour Party in 1981 to form the SDP. But they don’t bear comparison. The Four (Roy Jenkins, David Owen, William Rodgers and Shirley Williams) were high-calibre and talented. Even they couldn’t make a real political breakthrough.

These Seven are small fry. At least five of them (Berger, Umunna, Leslie, Gapes and Smith) are listed supporters of Israel and presumably endorse its military occupation of Palestinian lands and vicious oppression of the Palestinian people; and they spend much of their time stooging for that racist regime while complaining about racism within the Labour party.

As for Umunna, Wikipedia reports him as saying that his moral values come from Christianity, which is strange given his admiration for Israel and, as far as I’m aware, his reluctance to publicly condemn its horrendous crimes against the indigenous people in the place where Christianity was born.

Furthermore none of the seven respects the British people enough to implement their democratic wish to leave the EU – all are agitating for a second referendum.

While there’s much to complain about with Labour’s leadership and among the many airheads not yet purged, the party is well shot of troublemakers who just walk out. The danger is that The Insignificent Seven, as the Daily Star calls them, will serve as a magnet for other malcontents with little regard for British interests, only their own warped ambition.

Corbyn’s reaction on Labour’s Facebook page was to say: “I am disappointed that these MPs have felt unable to continue to work together for the Labour policies that inspired millions at the last election and saw us increase our vote by the largest share since 1945.”

And Shadow Chancellor John McDonnell felt the “honourable thing for them to do” would be to stand down as MPs and seek re-election to Parliament in by-elections without the Labour ticket. However, it seems the seven intend to remain superglued to their Parliamentary seats, calling themselves The Independent Group and practising “new politics”.

Less than two years ago these quitters won their seats with the Labour machine’s support and on a Corbyn manifesto that stirred the blood and vastly increased Labour’s standing. They should ask themselves where they would be in the political world without party help and without the party brand.

On the other hand it may not be long before we see this breakaway as another milestone in the wider conspiracy to frustrate the chances of a Corbyn government by dark forces with a belligerent agenda in the Middle East and an eye on other juicy targets.

Two years ago I and others were urging Corbyn to detach himself from the Labour Party’s Blairite ‘rump’ that was out to destroy him, to take his huge army of supporters and start a new party with a clean sheet and without the unpleasant baggage that lumbers modern Labour. The process now seems to be happening t’other way round. The baggage is leaving.

And the seven desertions are likely to prompt more in coming weeks.