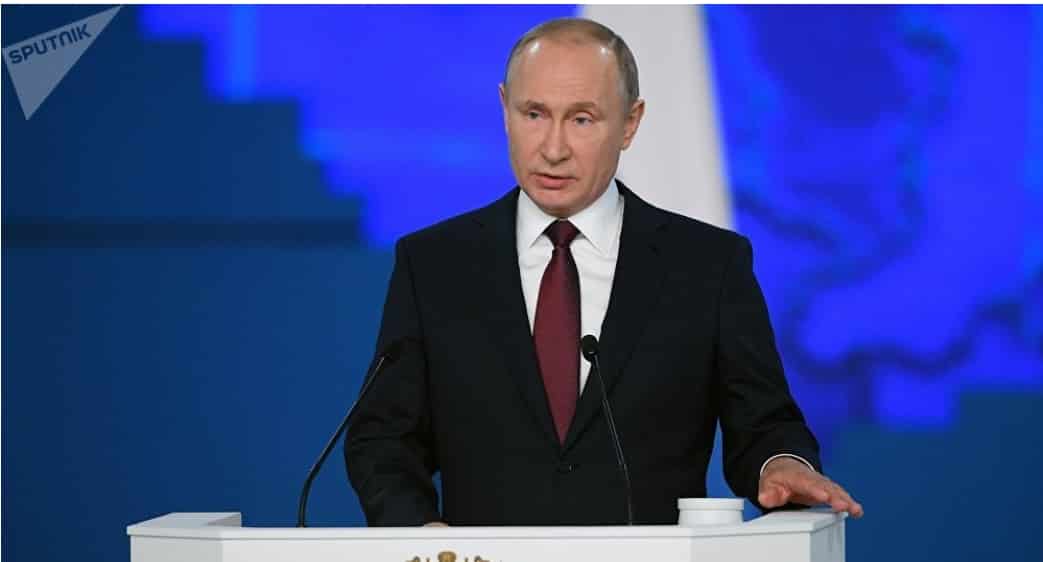 Sputnik/Moscow: In an address to the Federal Assembly on Wednesday, Russian President Vladimir Putin touched upon a spate of pressing international issues related to the Intermediate-Range Nuclear Forces (INF) Treaty.

Putin Warns Against US Missiles in Europe

During the address, the Russian president specifically touched upon the possible deployment of US missiles in Europe.

He warned that if Washington deploys its medium-and short-range missiles in Europe, it will “dramatically exacerbate international security situation” and create serious challenges to Russia.

He recalled that some classes missiles of US missiles have a flight time to Moscow of just around 10-12 minutes.

“This is a very serious threat to us. In this case, we will be forced — I want to emphasise this – forced to take tit-for-tat steps,” Putin underscored.

He also berated the US for violating the Intermediate-Range Nuclear Forces (INF) Treaty.

“Launching medium-range target missiles and deploying launchers suitable for using Tomahawk missiles in Romania and Poland, the US directly and grossly violates the conditions of this treaty,” Putin stressed.

He added that the US was not sincere about why it wanted to end the INF Treaty.

“Our US partners should have been honest about it instead of using thought-up accusations to justify their unilateral exit from the treaty. They should have done it the same way they quit the Anti-Ballistic Missile Treaty in 2002 when they simply pulled out, openly and honestly,” Putin said.

According to him, now that the US has violated the treaty, Washington is “looking for a pretext and pointing the finger” at others, while its “satellite states” have mobilised to defend the US’ actions.

Earlier in February, Washington announced that it was suspending its obligations under the INF Treaty, with Russia then responding in kind.

READ MORE: Russia Still Open for Further Talks on INF, US Has Time to Save Treaty — Envoy

The US said that it would withdraw from the accord within six months unless Russia returns to compliance with the agreement. Moscow has refuted all allegations of treaty breaches.

Putin confirmed that the testing of new and innovative Russian weapons, including the Sarmat intercontinental ballistic missile (ICBM), is proceeding on schedule.

“Work on advanced models and weapons systems mentioned in last year’s address continues without failures and in line with the plan,” Putin said, referring to tests of the heavy ICBM Sarmat which he added is “unprecedented” in terms of power.

He also said that the mass production of the Avangard hypersonic missile systems has started and the first regiment of the Russian Strategic Missile Forces will be equipped with the systems later this year.

Additionally, Putin mentioned the Peresvet laser systems and the Kinzhal hypersonic missiles which he said confirmed their “unique characteristics” during combat duty.

In his address to the Federal Assembly, Putin specifically called for expanding the country’s satellite network, which he said is needed for “a real revolution in communications and navigation”.

“It is necessary to increase the capabilities of our satellite network. Russia has unique technologies for this,” Putin pointed out.

According to him, such a task stipulates a qualitative upgrade of Russia’s entire space industry.