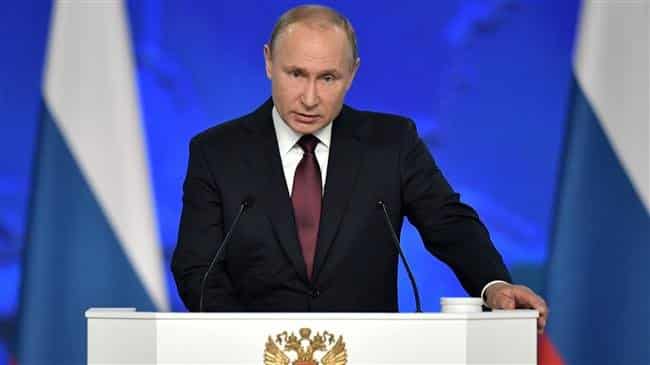 [ Editor’s Note: The Deep State has chosen to have an arms race and there will be no serious challenge to that in the US. That should come as a shock to no one.

Sure, there will be some Democratic opposition response, allowing it to maintain its veneer of being anti-war, but at the end of the day they usually want the war contract business cash flow coming into their districts, and always have. Consider the Democrat screams over Trump’s pullout in Syria and Afghanistan.

The concern over nuclear proliferation is the biggest joke of all. After Gordon blew the whistle on the list of undeclared arsenals, not one corporate media or political entity called to learn anything more about it. They don’t want to know. The ranking Democrats on the Intel committees have all seen the “who has nukes list” for many years, and done nothing.

The only bright spot I see in this is the EU, via Merkel, who says they will not allow nuclear armed missiles to be based in the EU. I find that hard to believe. Will none be deployed to US NATO bases, especially the air launched ones? Will Poland refuse to host them, based on its history of Russophobia, even post Cold War, when it has been under no threat whatsoever?

But VT salutes Congress, a little bit, stepping up to protect its turf over nuclear technology being given to Saudi Arabia without its OK. Not all members of Congress, and certainly not the freshman know that Saudi Arabia and many others already have them.

Nuclear proliferation is only bad when countries we don’t like have nukes. The Deep State considers it unfair play for any targeted country to be able to defend itself or even retaliate to US aggression.

Even our brave military prefers to engage with at least a 10 to one advantage, or a preferably 20 to 1, and has publicly admitted as such. So at the end of the day we will be back to “mutually assured destruction” as our last defense, but one where computer hacking could be used to create an incident to screen a preemptive attack to look like a retaliatory one, or a whole number of false flag options.

And with hypersonic weapons coming on line to be the new hair trigger for either a pre-emptive strike or a retaliatory one, there will be little time for emergency phone calls. The doo doo will have hit the fan and Marshall law will take over.

If a disaster results, a suitable patsy will be woven into the “what if” plans, always drawn up before hand to cover the powerful from being nailed with the blame, such as happened with the USS Liberty. We have been there before and the bad guys got away scott free as they had the juice to do it… Jim W. Dean ]

Russian President Vladimir Putin has warned the United States against deploying intermediate-range nuclear weapons in Europe, saying his country will target the US itself and not just the countries where those missiles are stationed.

In his annual address to Federal Assembly on Wednesday, Putin said Russia was not seeking confrontation and would not take the first step to send missiles in response to Washington’s decision earlier this month to withdraw from a historic Cold War-era nuclear arms control treaty.

However, he warned of a “resolute” reaction to any deployment, saying the US policy-makers, some of whom he said were obsessed with US exceptionalism, should calculate the risks before taking any steps.

“It’s their right to think how they want. But can they count? I’m sure they can. Let them count the speed and the range of the weapons systems we are developing,” Putin said.

US Secretary of State Mike Pompeo announced on February 1 that Washington would suspend the Intermediate-Range Nuclear Forces Treaty (INF) for 180 days and fully withdraw from it later if Moscow did not stop what he called “violations.”

The US has officially announced the suspension of its compliance with a Cold War-era arms control deal with Russia.

US President Donald Trump announced last year that Washington would withdraw from the treaty, which was signed toward the end of the Cold War in 1987 by then US President Ronald Reagan and Soviet leader Mikhail Gorbachev.

Under the treaty, both sides were banned from creating ground-launch nuclear missiles with ranges from 500 to 5,500 kilometers and led to the elimination of nearly 2,700 short- and medium-range missiles. The pact also banned either side from deploying short and intermediate-range, land-based missiles in Europe.

Washington insists that Russia’s new 9M729 missile is in violation of the treaty and should be dismantled immediately.

Russia rebutted the claim last month by unveiling the missile and its key specifications. Major General Mikhail Matveevsky, the Russian chief of missile and artillery troops, said the missile’s maximum range is about 480 kilometers, well within what is allowed under the INF.

Putin on February 2 responded to the US move by suspending the agreement, authorizing his military forces to push ahead with the development of new missiles.

However, he said that Moscow will not deploy any new missiles unless Washington does so, because Russia does not want to enter a new arms race with the US.

Russian President Vladimir Putin says Moscow has suspended the Cold War-era nuclear arms control treaty after the US and will develop more missiles in response.

On Wednesday, Putin said he was ready, reluctantly, to escalate if the US escalated, adding that Russia was continuing to actively develop weapons and missile systems to ensure it was well prepared for such an eventuality.

The Russian leader said any US move to put new missiles in Europe would pose a direct threat to his country and would leave it with no choice but to respond as such deployment would drastically reduce the time it took US missiles to reach Russia.

He said Moscow wanted good ties with Washington, but was ready with its defensive response if necessary. “We know how to do this and we will implement these plans immediately, as soon as the corresponding threats to us become a reality.